Nahdet Masr: Woman, Sphinx, and the Question of Modernity

In Egyptian writer Ahdaf Soeuif’s novel, The Map of Love, there is a scene that describes the statue Nahdet Masr (Rise of Egypt), a statue of a peasant woman unveiling as she stands next to the Sphinx:

“The statue of Nahdet Masr rises before her: the statue at whose feet they had gathered in the days of the demonstrations…when it had seemed that the young would conquer the world and they, the students of Egypt, would be among the conquerors. They had taken Nahdet Masr as their symbol: a fellaha [peasant woman], one hand on the head of a sphinx, rousing him from sleep, the other putting aside her veil; a statue at once ancient and modern.” (297)

At the time it was created by Mahmoud Mukhtar, Nahdet Masr was meant to symbolize Egypt’s national aspirations during the struggle for independence from British occupation. Apparently, Mukhtar wanted “to create a statue that combined all the dreams of Egypt and its civilization, blending the glorious past with the nation’s future aspirations. This is how the idea of Nahdet Masr was born.”

The symbolism of the statue was part of a movement which borrowed Pharaonic themes for its nationalist rhetoric, as in Tawfik al-Hakim’s famous novel The Return of the Spirit (1933) which depicts the 1919 revolution against the British occupation as the awakening of an Egypt infused by the spirit of Pharoahs.

In the novel, as in Nahdet Masr, the Pharonic theme is juxtaposed with the fellaheen, the peasants, who are depicted as having an authentic connection with the land.

Beth Baron in her book “Egypt as a Woman: Nationalism, Gender, Politics,” writes that:

“The sphinx and the woman both represent Egypt: the sphinx rising represents a rebirth of Egypt’s ancient grandeur, the peasant woman lifting her veil symbolizes the liberation of the modern nation.”

The representation of the nation, as a political abstraction, in the figure of a woman is of course a familiar trope of nationalist discourse, which often appropriates women or the working class as signifiers of traditionalism, reservoirs of a communal identity out of which the “imagined communities” of the future nation can be constructed.

However, while the peasant and the woman are often depicted as bearers of national heritage, their participation in constructing the nation is inevitably problematic, since they are often represented as doomed without the leadership of a (usually male) intellectual elite who must encourage them, or teach them, to look to the future, which exposes the limits of the supposedly inclusive nationalist project.

This is visualized in another contemporaneous statue which relates Pharaonism to gender, the statue of Mustafa Kamil by Leopold Savine, which depicts Kamil with one hand on the head of a sphinx with a peasant woman below them moving her veil aside with her hand to her ear, apparently listening to the voice of freedom.

In Soeuif’s novel, the role of the Kamil-figure is addressed in a scene with a gathering of Egyptian intellectuals, which includes the historical figure Qasim Amin,  women’s rights advocate and author of The Liberation of Women. Of course, Amin represents a historical discourse that often celebrates male intellectuals at the expense of their female contemporaries, since women “had been writing ‘feminist’ or gender liberationist poems, essays, tales, and stories before the distinguished male judge“.

Also, while not explicitly mentioned in the novel, Amin’s pro-British stance signals the complexities of nationalism at a time when, as Albert Hourani puts out, “To be independent was to be accepted by European states on a level of equality…To be modern was to have a political and social life similar to those of the countries of western Europe.” As Leila Abu-Lughod has pointed out, “although [Amin] spoke of women’s rights… what he ultimately was most interested in promoting was the modern  bourgeois family.”

In this context, the unveiling gesture of the statue might be compared to the unveiling of rural women across much of the region during the wave of modernization in the post-independence period. In fact, the practice of encouraging this modernization through unveiling was immortalized in a documentary on the “emancipation of women,” where Tunisian president Habib Bourgiba is seen symbolically helping peasant women remove their veils, some of them attempting to pull them back on afterwards. (This was discussed recently by Malika Zeghal in a talk on the politics of veiling and unveiling, particularly relevant given the current re-veiling of many Tunisian women.)

Of course in the nationalist, anti-colonial context of its time, it makes sense to see Nahdet Masr in Mukhtar’s terms, as a juxtaposition of the “glorious past” with “future aspirations,” as a symbol of modernity which wants to be literally in touch with its past, the modern woman with her hand on the sphinx.

But that raises the question of what modernity means in an Arab context, given what has long been seen as the arrested development of a region where, as Haideh Moghissi states, modernisation as distinct from modernity has occurred, altering “aspects of the urban economy but without fundamentally transformi 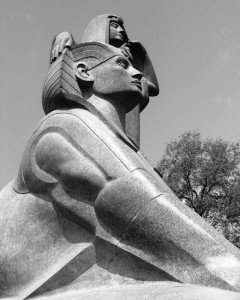 ng social and political structures or relations and forms of cultural expression.”

Today, as the student protests that Soueif depicts have given way to the ongoing turbulent protests in Egypt, it is not only university students who have taken Nahdet Masr as their symbol. The Muslim Brotherhood are now among those who stage their rallies around the unveiling fellaha and the sphinx.

In a post on this subject, a blogger poses a series of questions about the place of the statue today:

“Could Mahmoud Mukhtar be turning over in his grave as the Muslim Brotherhood rally around Nahdet Masr? Can all Egyptians, no matter their ideology, look to Nahdet Masr as a representation of expressions of national aspirations and identity?”

Perhaps it does not mean anything in particular, the blogger concludes:

”Do people really care about these symbols? Judging from the defacing graffiti and the statues, on the demonstrator’s routes, used as a climbing frame for a higher vantage point, the symbolism and significance of the statues that commemorate outstanding contributions of Egyptian leaders as well as representing national identity seemingly holds little importance in the public’s consciousness. At best, the statues are invisible, (which may be what protects them from destruction).”

Perhaps statues and their symbolic power are overrated, and if Nahdet Masr still carries symbolic power, it is only as an example of the argument that national identity always runs the risk of being reabsorbed into apparatuses of domination.  Or, perhaps, the statue is best seen as an illustration of the problem of national identity, which must  “root itself in the soil of its past” to forge a national spirit even as modernity “often requires the pure and simple abandonment of a whole cultural past.” 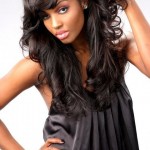 April 2, 2013 The Subtleties of Being Caught in the Crossfire
Browse Our Archives
Related posts from Muslimah Media Watch