“Do You Dream?” – A Police Campaign against Honour-Related Crimes

“Do You Dream?” – A Police Campaign against Honour-Related Crimes June 24, 2013 tasnim

Patheos Explore the world's faith through different perspectives on religion and spirituality! Patheos has the views of the prevalent religions and spiritualities of the world.
As the summer vacation begins in Sweden, so does a campaign against a broad variety of crimes that the police have been addressing under the category hedersrelaterat våld och förtryck – “honour-related violence and oppression.” In particular, the police have focused on forced marriage, which they believe to be a “seasonal” crime, as the risk of people being forced into marriage are greater during the summer with the long leave.

As one article covering the campaign put it, summer vacation is “not only associated with sunbathing and swimming. For some children and young people, forced marriages are on the schedule, something the police seeks to redress through a campaign against honor crimes.” Dalarna police chief Stefan Dangart comments that “it is especially important that this knowledge is out there for people when school closes,” as children can be left with no access to adult authority figures outside the family.

The bright pink poster, directly addressing “you,” poses the question: “Do you dream about playing football, going out with friends after school, or escaping a forced marriage?”

In very small type below it (too small to read unless you go right up to it), the poster goes on:

“If so, it may be that your family is preventing you from living the life that you are entitled to. Your family has the right to care about you – but not control, violate or threaten you. They may not force you into things you do not want, like for example, to get married. In Sweden, there are clear laws to protect all children and youth rights. Even yours.”

This poster is part of the police campaign “Your Rights,” which is not new but has been stepped up now just in time for the summer holidays. The poster is everywhere, in the underground, in waiting rooms, and in universities. It lists several rights, among them the right to be safe, to decide how to live your life, make friends, fall in love, dress like you want, take all the classes you want, and say no to marriage.

It’s a smart and direct campaign, addressing those it hopes will reach out to the police, offering information about who to call, how to either get in touch with the police or speak to someone at school. The police have been talking about both boys and girls being forced into marriage; however, the bright pink colour and the wording indicates that this campaign is speaking exclusively to schoolgirls – on the one hand, this may be problematic; on the other hand, focusing on a certain audience may be part of what makes it effective.  Statistics show that “although boys and men can also be the victims of forced marriages, the overwhelming majority of those in servile marriages are girls and women.”

When I spoke to a friend about this campaign, she was emphatic that it was a very good thing for “those poor girls,” but at the same time, contradicting her own words, she said it made her personally uncomfortable to see it. When I asked why, she said she was very careful to avoid looking at the poster, even glancing at it, because she doesn’t want to seem like “that kind of Muslim.” She did not want to be seen looking at the poster, because she didn’t want to be taken to be the “you” the poster addresses.

Since the only way to read the full text of the poster is to get really close to it, this could be a weakness in the campaign. But more importantly, my friend’s reaction points to the limits of the defensive crouch many Muslims feel they have to be in at this point of time. For those of us who are often stereotyped because we’re seen as Muslim, and who are tired of the assumptions that people make about us, this discomfort may be understandable. But maybe it also suggests that it is a little too easy to get caught in a loop where we protest that the majority of Muslim women are not victims (and portraying them as such reinforces stereotypes) to the extent that those who are victims become a parenthesis in our protest. 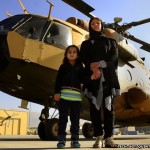 June 25, 2013 Racism and Responsibility: Seeking Solidarity with Black Muslimahs
Browse Our Archives
get the latest from
Muslim
Sign up for our newsletter
POPULAR AT PATHEOS Muslim
1