MuslimasTRI (Tackling Real Issues) is a new channel on YouTube started by two American women, Dena and Erin. In one of their videos, Erin shares an extremely personal incident when a Pakistani man she was romantically interested in said he couldn’t speak to her because she was black. On her blog, Jamerican Muslimah offers an equally blunt description of similar experiences:

“Beyond all the beautiful speeches given to me by my Indian, Pakistani, Caribbean Indian, and Arab brothers and sisters I realized that being Black, a woman and a convert made me less than. The litmus test was marriage. I watched as my fair-skinned Latina friends were repeatedly asked for their hand in marriage. I watched as the White female converts were held in high esteem and absorbed into immigrant Muslim families (their babies will be so fair, mashallah!) and I laughed inwardly at the sisters’ tales of being proposed to at the annual ISNA convention because that NEVER happened to me.”

Erin and Jamerican Muslimah provide accounts of racism that are profoundly raw and painful on individual levels. Racism, however, is also inherently systemic and these experiences are captured by other bloggers, such as one from MMW’s very own Faith, in her post entitled “The Invisible Muslimah” from 2008. Here, she writes:

Earlier this year, Sharrae also noted the absence of black Muslim women from mainstream media in the West. In my internet searches, I’ve noted very few posts and articles that specifically speak to racism within Western Muslim communities. Media accounts of racism within Muslim societies seem largely limited to the experiences of black peoples living in countries within the Middle East, and those experiences are set in a different context than those I’m referring to above.

The invisibility of our black Muslim sisters from the mainstream media discourse speaks volumes. The lack of representation denotes the “othering” of the experiences: that we don’t see experiences of being black and Muslimah as part of the broader, lived reality of Islam in the West. As Muslims, in general, we can talk a great social justice talk. There is an abundance of media that propound and exalt the Muslim, religious commitment to social justice, that Islam is about brotherhood and sisterhood, and gender equality. But the accounts from above share a different, more complicated reality.

I’m not writing this post to throw a pity party for our black Muslimah sisters. Many of these women are fierce, resilient, unapologetic women, like the brilliant Dr. Amina Wadud, who blaze paths that I can only dream to follow. But this is a call for non-black Muslim women to examine our roles in perpetuating racism.

Decolonization is, absolutely, an important part of the process. As a South Asian woman, my understanding of beauty is wrapped up in a history of skin lightening creams, foundation shades lighter than my skin, and fear of the sun for all the wrong reasons. Emaan captured that same conversation in her post in January. Margari Aziza, in “Making a Pilgrimage for Life,” makes similar connections between colorism and racism.

Our personal work as allies, however, must go farther and examine aspects of our privileges that are difficult to “see.” As a queer-identified South Asian Muslimah, it’s often second nature for me to think about the multiple ways I see, feel, and deal with homophobia, racism, sexism, and Islamophobia. As an able-bodied, educated woman, I have far more difficulty explicitly identifying all the ways in which I implicitly benefit from ableism, classism, and the experiences of racism shared by black women. Erin and Jamerican Muslimah share the ugly reality that many Muslim communities do not attribute desirability to black women. Whether I like it or not, as a lighter skinned, South Asian woman, I’m often considered to be more “desirable” to those same Muslim communities. I’m accountable to those assumptions because my appearances often afford me unearned privileges within the mosque that black Muslimahs don’t share.

Those of us who are non-black Muslimahs rarely talk about racism within media from the perspective of taking responsibility. While I haven’t yet explored the complicated issues related with becoming allies here, naming the privilege itself is a critical, first step to committing our solidarity with black Muslim women. The conversations are, admittedly, extremely uncomfortable. But the discomforts that I feel untangling my own prejudices are far less than the pain, humiliation, and degradation experienced by racism. That’s the least we owe our sisters. 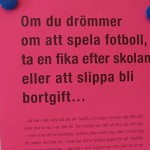 June 24, 2013
“Do You Dream?” – A Police Campaign against Honour-Related Crimes
Next Post

June 26, 2013 On Corrupt Bureaucrats, Nikah Siri Marriages, and Indonesian Women
Browse Our Archives
get the latest from
Muslim
Sign up for our newsletter
POPULAR AT PATHEOS Muslim
1