The Crimes and Punishment of Apostasy and Adultery

The Crimes and Punishment of Apostasy and Adultery May 22, 2014 tasnim

Meriam Ibrahim, a Sudanese doctor who married a Christian man in 2011, was convicted last week on charges of apostasy.  While Ibrahim has a Muslim father, she appears to have been raised Christian. Apostasy implies conversion, but as Ibrahim reportedly told the judge, “I am a Christian and I never committed apostasy.” By her account, Ibrahim has always considered herself to be Christian, raising the question of what it means for a court to be using “Islamic law” to sentence her when its basis for considering her a Muslim may itself be dubious in Islamic law.

Ibrahim was given a “grace period” of three days to repent.  AFP reports that the judge told her:  “We gave you three days to recant but you insist on not returning to Islam. I sentence you to be hanged to death.”  The couple reportedly have a child and Ibrahim is eight months pregnant. Local media report that the death sentence would not be carried out for two years after she gives birth. However, since her marriage with a non-Muslim man is not recognized as legitimate by Sudanese law, the court in Khartoum has ordered Ibrahim to be given 100 lashes for committing adultery.  This sentence is apparently to be carried out after she has recovered from giving birth.

The story has drawn widespread outrage and condemnation, from protestors outside the court who held up banners insisting on the freedom of conscience to calls by international rights groups for Ibrahim’s immediate and unconditional release.  Amnesty’s Sudan researcher Manar Idriss condemned the punishments, saying apostasy and adultery should not be considered crimes:

“The fact that a woman has been sentenced to death for her religious choice, and to flogging for being married to a man of an allegedly different religion is appalling and abhorrent… Adultery and apostasy are acts which should not be considered crimes at all.”

Ibrahim is Christian, but the court considers her to be Muslim; therefore she is accused of apostasy. She is married, but her marriage is not recognized; therefore it is described as adultery. The story has catapulted into the headlines, some looking to highlight the most shocking aspects: Pregnant Sudanese Woman To Be Whipped & Hung For Apostasy. Other media outlets provides more context, whether in terms of Omar Al-Bashir’s 1989 coup and introduction of hudud punishments, or in terms of the split within Islam when it comes to apostasy – succinctly compressing a debate of thousands of years into a paragraph:

“There is a long-running debate in Islam over whether apostasy is a crime. Some liberal scholars hold the view that it is not – and back up their argument by citing the Koranic verse which states: ‘There shall be no compulsion in religion.’ Others say apostasy is tantamount to treason – and refer to what Prophet Muhammad said: ‘It is not permissible to spill the blood of a Muslim except in three [instances]: A life for a life; a married person who commits adultery; and one who forsakes his religion and separates from the community.’ The latter is the dominant view in conservative Muslim states such as Sudan, Saudi Arabia and Pakistan and the cause of much religious tension.”

I think it is important to understand this story within the particular context of Sudan and the wider context of the debate about freedom of religion within Islam, not because this is somehow a fair question with two valid sides to be debated, but because it is essential to bring in the question of how Muslims have responded and should respond to such cases. In a recent debate where Maajid Nawaz described himself as taking a position “between” his fellow panelists Ayaan Hirsi Ali and Feisal Abdul Rauf on whether Islam is a religion of peace or a religion of war, he commented simply that “Islam is a religion” that is always interpreted. However, he made the point that the dominant view in recent decades has been that of conservative and fundamentalist forces. For Nawaz, the questions arising out of these interpretations, issues such as blasphemy, apostasy, and hudud punishment, require critical conversations which have taken far too long to happen within Muslim communities. But how can they happen most productively?

The conversation Nawaz was taking part in, as in a similar debate he took part in a couple of years earlier, seems to me an example of what happens when these debates are primarily addressing a Western audience, with the emphasis always falling too heavily on either defensiveness or reassurance. For self-critique to truly take hold, there needs to be a real engagement with Muslim communities.  Otherwise, there is a danger that what should be a deep debate becomes a superficial “look how progressive I am” show.

The question of internal debate and self-critique recalls Tariq Ramadan’s debate with Nicholas Sarkozy in 2003, where Sarkozy demanded that Ramadan condemn the notion of barbaric punishments such as stoning for adultery. Although Ramadan condemned the death penalty for apostasy outright, he responded by arguing for a moratorium when it comes to the punishment of adultery. Some may argue that the lack of any consensus on these issues supports Ramadan’s call for an internal debate and a halt to the punishments, while for others this is essentially cowardly avoidance. Towards the end of an interview on Al Jazeera, Ramadan responded to these questions by arguing that he is attempting to win a debate within Muslim communities, from “from within the universe of reference as Muslims”. One of those on the panel challenging him, Alan Johnson, argued that “when women are being stoned, I think it is up to democrats to take a firm position and take a stand.”  Ramadan responds: “why don’t you criticise Amnesty International saying in the States they are for a moratorium on death penalty? Are they cowards?”

Yasmin Albahi Brown, representing British Muslims for Secular Democracy, put it this way: “I want to hear from you…there is no moratorium on stoning, it is wrong and it should never happen. I want to hear a direct sentence like that.”

But I wonder, what comes after that direct sentence? How does an internal debate happen? How do we talk about how we understand crime and corporal punishment within Islam today? And, while we try to encourage this internal debate, how do we take a stand in relation to the sentencing of women such as Meriam Ibrahim? 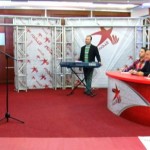 May 21, 2014
Women in Gaza Underrepresented in Talent Shows
Next Post 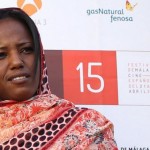 May 23, 2014 Friday Links | May 23, 2014
Recent Comments
3 Comments | Leave a Comment
Browse Our Archives
get the latest from
Muslim
Sign up for our newsletter
POPULAR AT PATHEOS Muslim
1

Latina American Muslimah on Khimars and World Hijab...
By Hazel Gómez In this strange era of the increased attempt of...
view all Muslim blogs
What Are Your Thoughts?leave a comment

3 responses to “The Crimes and Punishment of Apostasy and Adultery”