In Canada, Thanksgiving is celebrated the second Monday of October. Coming from Mexico, Thanksgiving has never meant very much to me. In fact, it tends to be a reminder of how complex and honestly messed up settler-Indigenous-immigrant relationships are in Canada.

Whereas some Canadians have tried to differentiate themselves from Americans by tracking the history of the holiday to the pre-contact harvest season, the so-called “discovery of America,” or the successful completion of settler-explorer missions in the Artic (you can ready a full article here), the reality of things is that for me, Thanksgiving is a constant reminder of colonialism. The holiday is perhaps not as widely celebrated as in the United States, but it is important enough to figure in newcomers’ guides and citizenship study books (for those seeking to become Canadian).

As weird as it may be, Thanksgiving has also become important for some immigrant and minority communities, who find that the holiday is also a way to bond with mainstream settler groups. Thanksgiving now speaks the language of multiculturalism (which has its pros and cons). Newspapers in the past few days have been publishing tips about inviting newcomers to join Thanksgiving celebrations and drawing parallels between Eid Al-Adha and Thanksgiving, particularly since the last Eid was only a few days ago.

Muslims often feature prominently in Thanksgiving articles for a number of reasons. First, many join forums and blogs to inquire about whether or not celebrating it is “halal” (here and here). Others advocate for the celebration of the holiday from different perspectives. Some writers perceive the holiday as a way of embracing certain values, as something of particular importance to new converts to Islam or as an opportunity to be thankful for the good grace bestowed upon many Muslims. The celebrations also seem to include halal turkey to Pamela Geller’s dismay!

Nonetheless, the holiday does not invite the paraphernalia that occasions like Eid Al-Fitr and Eid Al-Adha do. Thus, there is very little media coverage of Muslim women’s participation in Thanksgiving and virtually no halal turkey recipes or tutorials led by Muslim women online (which although often quite gendered, remain an important part of other celebrations). In fact, except for a couple of articles written by Kari Ansari and Ellen from I, Muslimah, Muslim women are quite invisible media-wise in the preparation and celebration of this holiday.

Whereas one can speculate about why this is, I find it quite interesting that talks about Muslim participation in Thanksgiving are led by men, as demonstrated by the above links, 90% of which are written by men or express the opinions of men. It would seem that much of the community-to-community liaising becomes newsworthy when men in both communities are at the forefront.   For instance, the very few articles featuring Muslim engagement in this year’s Canadian Thanksgiving focus on the efforts of a Muslim community in Saskatoon that will be providing free driving/taxi services for those wanting to be home for the holidays. Although the article is not concerned with gender per se, the majority of Muslim taxi drivers in Canada (and of taxi drivers in general) are men.

Now, I know for a fact that Muslim women (and men too), particularly those in universities, will be assisting shelters and missions to cook and serve Thanksgiving dinner for people living with housing and food insecurity. However, that does not seem to be newsworthy these days.

And on top of the gender dimension, I find that many pieces written by Muslims regarding Thanksgiving are uncritical of the colonial past, the situation of immigrants in Canada and the complicity of some immigrants in the rhetoric that has led to the expropriation of Indigenous land for the sake of a “Multicultural Canada.” In that regard I appreciate the insights of my fellow Muslimah Media Watch writers, who, although not specifically about this holiday, have made efforts to connect the dots of oppression and solidarity (a piece by Sharrae and a piece by Krista).

On my end, this year I decided that I must be thankful. But not in the colonial way. Given a recent loss in my life I am undoubtedly thankful about seeing the light of another day and having the strength to continue. But more than that, I am particularly thankful for being able to share the struggles of social justice and the reinterpretation of history with people who have found the words to critique holidays like Thanksgiving. 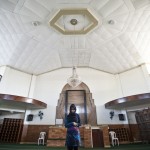 October 15, 2014 South Africa’s Open Mosque : Media, Feminist Critiques and “Unopen” Mosques.
Browse Our Archives
get the latest from
Muslim
Sign up for our newsletter
POPULAR AT PATHEOS Muslim
1

Hajj, Ka’aba and Mecca Royal Clock Tower
It is the Hajj season again and Muslims will be heading to...
view all Muslim blogs
Copyright 2008-2021, Patheos. All rights reserved.