Guest Post by Kawsar Hosseini (@kaw_sarr), who writes at the blog East-West Bridge.

The story of the lynching of Farkhunda, a woman accused of burning the Quran in Afghanistan, has been widely covered by media in recent days. Among those who have written about the lynching are many Afghans.

In a Guardian article, Frozan Marofi, one of the women who went to the burial of Farkhunda calls her “this martyr of Afghanistan” while BBC Afghan’s Karim Haidari writes of why he is “ashamed to be a man in Afghanistan.” For the many Afghans joining in the protests, both in the diaspora and in the country, the lynching, as Haidara notes, is yet another reminder of “the ugly and misogynistic nature of parts of Afghan society.” So let’s talk about those ugly and misogynistic parts of Afghanistan, where they come from, and what can be done to fight against them. I know, I know, with the wide coverage of the story and the Justice for Farkhunda social media campaign, there are so many people giving their opinions on this story, so why should I even bother give mine? Well, because I am an Afghan Muslimah. And as an Afghan woman, I know that there are hundreds of females in Afghanistan, beaten up, and burnt alive. Honour killings based on pure accusation are commonplace in Afghanistan. What breaks my heart, is that this is not only the case in Afghanistan. It expands to the Middle East, Asia and South East Asia.

It might be easy to describe Afghanistan as “the worst place for women” as one CBS article does, but the brutal murder of Farkhunda is not an isolated, or even sadly an unusual incident in this region.

I sincerely believe that this horrible event was a reaction of angry men, seeing and witnessing more and more Afghan women slowly progressing towards freedom. More women are in parliament. More women are on television. Women’s rights have been making big gains in Afghanistan. As Anne Stead writes there is a “record amount of girls are in school in Afghanistan and the Constitution guarantees equality before the law.” For many Afghan men, these gains towards more freedoms for women are threatening.

Seeing what is happening, many of us will ask ourselves: how can any human being beat someone to death without feeling any remorse?

You would have to be numb. And that’s exactly the problem. We’ve become numb. We see much, but feel little. We talk too much, and act too little.

But just as I am horrified by the brutality against Afghan women, I reject the portrayal of Afghan men as savages. Because humans are savages, not Afghans. Afghan men, like men in many other parts of the world, (including the West) have been subject to misogynist indoctrination in disturbing amounts, having been taught, and programmed that aggression towards women, is nothing more than a fair consequence of THEIR (women’s) actions.

We need to fix this puzzle. And fast. By waking up, and having a long term vision.

Long term vision, as in raising our daughters to be free spirits and raising them to believe that freedom is theirs already, and that there’s no need to ask permission first. At the same time we need to raise our sons so that they will respect the choices and freedoms of women and see them as equals. Let’s start today. Right here and right now.

My prayers are with Farkhunda and her family. May God bless her.

ETA: This post previously included an erroneous image. We deeply regret this mistake and apologise for the confusion it caused. 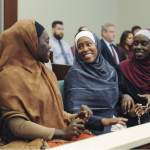