I really love all that feelgood interfaith stuff, so I was excited to read Faithfully Feminist: Jewish, Christian and Muslim Feminists on Why We Stay.

Ok, maybe I balked a little when I found out MayimBialik raved about it, (where do I begin, her flip flopping on being an anti-vaxxer or not, or her buying bulletproof vests for the IDF during a veryquestionable Gaza campaign). But hey, she didn’t write it so I will let it go. Having read other books in the I Speak For Myself Series (see Diana’s MMW review for the first book here) was another reason I wanted to dive in to Faithfully Feminist.

In Faithfully Feminist, 15 Christian, Muslim and Jewish women each share their stores as part of a platform where feminist women of faith are front and center. Feminism is a divisive, even dangerous issue these days (just look at what is happening at the University of Toronto) before you even get into how dicey it is to try to mix faith into it: the editors in the introduction mention how “Religion is criticized in the progressive, secular sphere as violence inducing, irrational, and anti-feminist.”

The reality is more complicated for feminists of faith, which is also how I identify myself. I often find myself lost in the black and white definitions both the mainstream media and mainstream Muslim orthodoxy want to pin on me. I am tired of talking about veils, I am tired of discourse on women and their rights always being seen through the optic of current or future husbands, I am tired of being told that I am somehow less of a feminist, or less than in general, because I happen to identify as a Muslim in Europe, where atheism is the norm and Muslims are the bad guys.

As mentioned in the foreword by Judith Plaskow, Rosemary Ruether and Amina Wadud, the truth is, that “women reconcile their faith and feminist identities in diverse ways.” There is a nuance and complexity lost in mainstream discourse on religious women, as well as the fact that those who are part of the story do not always have a voice. It is nice to see books, like this and others in the I Speak For Myself series, actually put religious believers at the center of the discussion rather than talking about them.

Naturally, I expected to be more drawn to the Muslims stories (especially since some of the authors are friends of friends or people I know online), but I enjoyed reading all of them. Out of the three “sections” (although the stories are spread out through the book), I especially enjoyed the following:

The first essay in the collection, and my personal favorite was by Deona Kelli Sayed, which started off with her husband mentioning that husbands are “responsible in heaven for the wife’s sins, even more so than they are for their children’s sins.” I knew exactly what she meant when she wrote further down “This doesn’t intuitively feel right. I don’t like it.” I remember sitting in a religious course in someone’s home, and a learned woman of the community was trying to explain to me why there are two female witnesses to one male (problematic in itself but not the point in this post). The woman started telling me, “you know, because the woman might forget, and the other woman can help her. Sometimes on our periods we ‘forget’ stuff.” I let it go, but at the time I was thinking “Do you actually believe this? Why can’t men ‘forget’ stuff?” What follows in Ms. Sayed’s essay is a beautiful foray into how she reconciled feminism and Islam in her own life. Like her, I grew up in the south, and like she mentioned, women were at the center of my religious experience, both before and after Islam. Ms. Sayed’s writings were so relatable to me, and a great beginning in setting the tone to the rest of the book.

Having been raised a Christian, in a hodgepodge of Methodist, Lutheran and Southern Baptist teachings, I identify with a lot of Christian women, especially those in my own family. “Sometimes, the Minister is a Girl” was written by Kathryn House who, like me, was christened United Methodist but mainly went to Southern Baptist churches. I felt an affinity for her path, even though I became Muslim in the end. She says, “When it came to the question of my Christian faith and my gender, I did not wake up one morning and realize that I was a member of a denomination that resisted and discouraged women’s ordination.” I too, growing up in the church, my gender was not one of the things I worried about- my religious caretakers were all female and family. I never had any place to worry about that until I started questioning Christianity- and even then, how many questions can I ask about women and Islam as well? Her journey to the ministry is a beautiful and courageous one.

Finally, I loved Aviva Richman’s “Music and Prayer: Harmonizing Religious Contradictions.” As a former pianist, I too have had my issues in terms of reconciling music and religion. In my congregation in France, there was a heavy reliance on nasheed, and I still feel a connection to certain Qu’ranic recitations which transcend the simple boundaries of the message. Ms. Richman’s narrative style is engaging, and drew me in as a reader. I especially loved, when speaking of her childhood rabbi refusing to help her with some points of service, her humble conclusion on the situation: “One can only expect so much from any given person in one lifetime.” What a beautiful way to look at another human being, given that none of us are perfect?

In closing, these were uplifting stores by women I identified with, women I felt were somehow like me, which made it worth the read in itself. I think it is normal to some extent to struggle with feminist interpretations of what others want to claim is orthodoxy and for a woman of faith to feel like she has to justify her feminism from every side. Faithfully Feminist toes the line in a sensitive, insightful way. One of my favorite qualities of a book is its accessibility, and the stories of Faithfully Feminist are readable, authentic and relatable. The foreward, specifically, does a very good job at framing the context of these stories. Finally, I think it is so important that in issues touching women and religion, that our voices be heard, which is something the I Speak For Myself series as a whole, as well as Faithfully Feminist, does quite well. We live in a time where both feminism and religion get a bad rap, and such a collection helps to frame the questions around these topics in an empowering way for those of us who identify as feminists of faith.

MMW’s copy of Faithfully Feminist was graciously provided by the editors for review purposes. 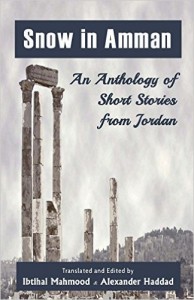 Muslim
Review of Snow in Amman: An Anthology of...
Muslimah Media Watch
TRENDING AT PATHEOS Muslim