Not Between Her and Allah: Hijab-shaming in Malaysia

Hijab-shaming is a favourite activity for some Muslims, both on-and offline. In fact, just last month I attended a religious class where the teacher spent a good half hour doing just that (I had to stop going for my mental health).

While meeting up with a girlfriend last week, she regaled me with the details of a religious class where the female teacher showed examples of “improper hijab” from a selection of hijabi Instagram users – young women who were obviously oblivious to the use of their photos for such educational purposes.

Social media gives a degree of anonymous bravado that makes it easier than ever to degrade and shame Muslim women for not wearing the hijab – the sixth pillar of Islam. (Oh wait, it isn’t? Funny, it sometimes does seem like it is…)

Last week, Bank Negara Malaysia (the central bank, or BNM) awarded a handful of prestigious scholarships to underprivileged students from around the country. 18-year-old Nur Hajar Asyiqin Abdul Zubir was one of the four to receive the award, after several rigorous rounds of assessment.

Currently studying for her ‘A’ Levels in Negeri Sembilan state, she dreams of studying chemistry at Oxford University in the UK – a “golden opportunity” that this scholarship will be able to fund without worrying her parents, who work as meat suppliers. The youngest of five children in the family, Hajar had scored 9 A+s in her secondary school examinations last year and learned about the scholarship through a motivational programme for underprivileged students in the country.

Malaysia is a multiethnic country, where the indigenous Malays form the majority alongside Chinese and Indian minorities. Instead of pride in her excellent academic results, several Malay men on Facebook chose to criticise the fact that Hajar does not wear a tudung, or hijab.

One man said it was a “pity the aurat is not covered” and that “her father bears the sins”. Another man similarly qualified his congratulatory message with a snarky proclamation that “Allah hates His servants who do not cover” and dismissed the role of Hajar’s own intellectual efforts with the remark “we succeed not because we are clever”. Yet another man even suggested that the hijab should be a requirement for a scholarship awarded for academic excellence.

While one website described this online activity as “chiding”, I disagree: shaming is more accurate. It’s easy to shame Hajar because she is a young girl from a poor family, with no social standing. But it looks like women with a higher status in society are still not exempt. Case in point: a princess from another Malaysian state.

Tunku Tun Aminah Maimunah Iskandariah was recently the target of negative comments on photos posted on Instagram by herself and her brother, Tunku Idris, which shows her without a tudung – her habitual look.

The only daughter among the six children of the Johor sultan and his wife, the fashionable 28-year-old still keeps an Instagram “fashion diary” (@ttaootd), which is heavily monitored for negative comments.

While her brother claims that Tunku Aminah had shut down her Instagram account much earlier and for reasons unrelated to the comments on her lack of hijab, he admits that such comments do “tick [him] off.”

He defends his sister by posting several photos and comments on his account on not being judgemental of how others look. He even vouched for what he knows of his sister’s spirituality, like praying and covering her hair at religious events: “Is that not good enough? Isn’t it between her and Allah?”

It’s such a simple – almost rhetorical – question, yet it is one that is difficult for many of us to answer. These people are shaming Hajar and Tunku for not fitting into their narrow ideas of what it means to be an ideal (Malay) Muslim woman. While deriding others is an attempt of the actor to give himself moral or psychological power, it only reveals his own internal crisis of masculinity. 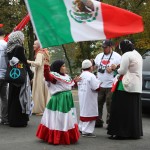 4 responses to “Not Between Her and Allah: Hijab-shaming in Malaysia”