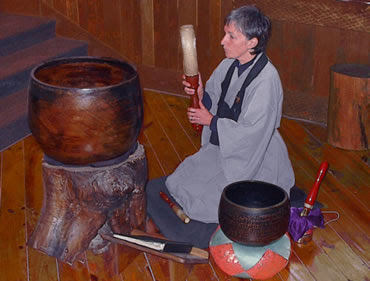 Recently I was reading Yamada Mumon’s Lectures on the Ten Oxherding Pictures. A wonderful book, I commend it to anyone interested in the Zen way. Although, actually, this entry is in fact a pointer to a bouquet of brief, but essential Zen texts. All this inspired by a mention in the preface to Yamada Mumon’s book how in Japanese (Rinzai) Zen the “Oxherding Pictures” are collected with three other brief texts as the Zenshu Shiburoku, “The Four Texts of the Zen Sect.”

Song of Awakening by Yongjia Xuanjue

These really are significant texts for anyone interested in Zen. (And they don’t even take long to read, although they are worth endless revisits…) Not long after reading this I mentioned the list to my friend Victor Lapuszynski, an old Zen hand, who said he’d seen another list which did not include Dogen’s Zazengi, but did include:

Identity of Relative and Absolute by Shitou Xiqian

Song of the Jeweled Mirror Samadhi by Dongshan Liangjia

And Vic added how he really, really likes, and would add to any bibliography of brief Zen texts:

Song of the Grass Hut by Shitou Xiqien

Finally, somehow it seemed to me inappropriate to have such a list of brief texts without including that text from the Prajanaparamita Cycle which seems to be chanted at nearly every Zen event, the Heart Sutra.

August 6, 2007 How Many Zen Masters Are There?
Recent Comments
0 | Leave a Comment
Browse Our Archives
get the latest from
Monkey Mind
Sign up for our newsletter
POPULAR AT PATHEOS Buddhist
1

Buddhist
A Small Meditation on Picking and Choosing in...
Monkey Mind