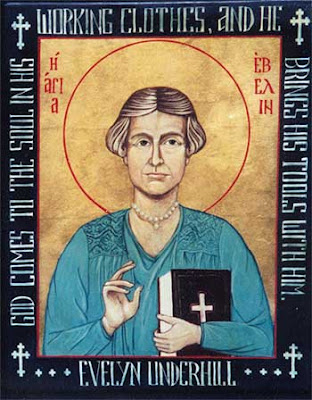 Evelyn Underhill was born on this day in 1875.

In my youth trying to sort out my own intuitions and longings, and very, very rudimentary experiences, I found her quite helpful. Evelyn Underhill’s major work, published in 1911, Mysticism: A Study of the Nature and Development of Man’s Spiritual Consciousness was informed by two other studies of some merit, Maurice Bucke’s Cosmic Consciousness and William James’ Varieties of Religious Experience.

As valuable (and limited) as I found those other books, I think Underhill pursued the matter to greater depth than either of her predecessors. And I continue to recall her with the greatest respect.

Writer Joyce Rogers observes, “Evelyn Underhill, whose book Mysticism is considered the standard reference on the subject, claimed that mysticism “is the name of that organic process which involves the perfect consummation of the love of God …. the art of establishing a conscious relation with the Absolute.” This art is achieved in exactly the same way that all relationships among humans are done, namely by being with another, by talking and listening to the other, by getting to know and be known by the other.”

Underhill’s own path was entirely western. While considerably influenced by the majesty of Roman Catholic mysticism, particularly through the guidance of her mentor Baron Friedrich Von Hugel, she never left the comprehensive embrace of the Anglican communion.

Underhill, like Maurice and James, attempted a typology of the spirit, a map of the spiritual path. Each helped me along my own way, and for all I remain grateful. While one needs be wary of typologies (I think of the amazing power both to guide and to delude in that particularly clear map the Ten Oxherding Pictures as well as many lesser and frequently completely wrong systems – there are so many…), they are heartful attempts to describe universal human experience. Of the western models, it is my memories of Underhill’s that continue to inform me more deeply, as more accurate, as more cautionary, as more useful…

I noticed that in 2000 the Church of England added Eveyln Underhill’s name to their calendar, observing a feast in her honor on the 15th of June. Sounds right to me…

December 6, 2008 Redemption Song
Recent Comments
0 | Leave a Comment
"Universalism has a lot to offer humanity as a way forward. I wrote a book ..."
Matt Johnson Considering Universalism: The Secret Teaching of ..."
"I was always taught (since 1970) that in China, anyway, the five classic poses for ..."
Neva Trejo A Note on the Use of ..."
"A wonderful piece, James. I was recently sitting a week long thing, and two days ..."
Keith Angilly A Note on the Use of ..."
"Thank you, Mark."
jamesiford The Zen of Lewis Carroll: A ..."
Browse Our Archives
Related posts from Monkey Mind