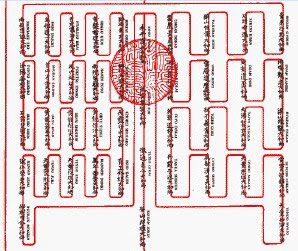 Sadly, over at Enlightenment Ward we learn two Zen teachers are charging that the other has faked up his credentials.

In Zen this is a big deal.

I think Zen teachers and Dharma transmission are frequently puffed up way too much. Grand and frankly on occasion magical claims have been made by or on behalf of too many Zen teachers. Lots of noise, smoke and mirrors. And it should be challenged when it is oversold.

In my opinion if only because the Zen Dharma is too precious to allow distractions of that sort.

But there are several kinds of distraction.

And another is the self-declared teacher.

There is only one way to become a Zen teacher. A teacher is made by another teacher standing in the traditional Zen lineages. Thus has it always been, well, at least since Zen emerged in early Medieval China.

It is true for monks and nuns, for priests and lay people – all who may be acknowledged as Zen teachers.

Now, there are complexities, as there are in all human enterprises. Occasionally there have been breaks that have needed healing, so there is some mutability in how acknowledgment happens. For instance most notably here in the West, Philip Kapleau, an early Zen teacher, had received permission to teach but not the ritual formal acknowledgement known variously as Dharma transmission or Inka Shomei. (In the West, where formal Dharma transmission has in many instances been broken into two parts, both designations might be used.*) However, Kapleau’s Dharma successors are acknowledged as “real” Zen teachers by their peers, and are invited into the biggest of the Zen clubs, the American Zen Teachers Association. I know I certainly consider them totally legitimate. One could say they have a lateral transmission instead of a vertical one. Having both is probably best…

Still, the Kapleau lineage, also known as the Rochester lineage is a shining exception to a quite strong rule. This exception is grounded in some ways comparable to the Christian Orthodox concept of Economy, where the deficiencies of an individual are covered by the church as a whole, if the majority of Zen teachers accept someone, sure that person is real.

However this points one thing out, Dharma transmission or Inka is not all about magic.

If someone wants to be a Zen teacher, they must be made one. And that ceremony is public or has a major public aspect to it. And for the most part there are written documents involved. And on those rare occasions if there aren’t documents, there are witnesses. If there aren’t, well…

If you ask someone who claims to be a Zen teacher who authorized them and they throw you out, you may safely assume that person has made it up. If that person says the question proves you’re not enlightened, then this suggests that person has made their credentials up. If they say it is none of your business, they are probably a fraud.

Now, I really believe Zen credentials are often oversold. All they prove is that you have been approved by someone. I’ve met people with wonderful credentials that I wouldn’t recommend anyone study with. For many different reasons…

And I’ve met people who are wise and good teachers, authentic spiritual guides in this life, who have not been authorized as such by anyone.

But if the word Zen enters the picture, well, there are rules to the game. Just like with the Catholic Church, just like with becoming a medical doctor. There is a program. There is a certification. And if you don’t have it, you ain’t one.

I brood over that word fraud. Of course in this enterprise the rewards are usually not very big. Only a few teachers make a professional level living, and to the best of my knowledge they all have the requisite credentials. Those who sign on as teachers, self-declared or otherwise, are signing up for lots of work and little reward. I suspect in most cases deep wounds are involved. And some of these wounded folk are very interesting. Some even have a real teacher in there somewhere, I have no doubt. But… Wounded birds. And in need of getting themselves a teacher rather more than being one…

So, maybe you want to find a Zen teacher.

The larger majority of authentic Zen teachers or their teachers or their lineage peers belong to the American Zen Teachers Association,** which maintains public lists. It is not intended to be a credentialing organization and a number of first rate teachers disdain such ideas as a club like the AZTA. But, it is a good place to start.

If someone presents themselves as a teacher and it isn’t clear who authorized them, or if they say, but the credentials are unclear, or are to people who you can’t find on the web, well then contact someone in the school to which they claim to belong.

It won’t take long to figure out if they’re inside the tent, or not…

* I’m also concerned with this emergent system in the West, where in many cases someone has all the permissions of teaching, except the right to name their own Dharma successor. For various reasons I’m now aware of several people with such credentials who have broken with their teachers and are now teaching independently. I don’t know what’s going to happen when they start naming their own heirs…

** Truth in advertising. I currently serve on the AZTA’s membership committee.