A Small Call for Justice in Rhode Island 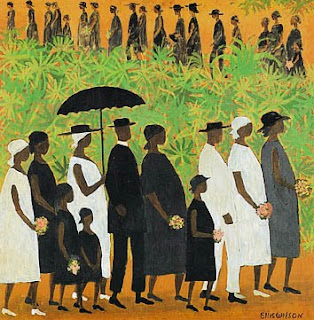 I just sent the following letter to the editor to the Providence Journal. If you live in the state, I hope you will consider similar notes to various venues…

I was profoundly saddened to learn of Governor Carcieri’s veto of H 5294, which would have allowed domestic partners to claim the bodies of their loved ones. The bill was the legislature’s response to the Kafkaesque nightmare Mark Goldberg endured trying to claim the body of his partner of seventeen years.

Apparently the governor gave three reasons. First, the definition for a domestic partner provided in the bill was a year of cohabitation, together with evidence of financial interdependence, such as a shared credit card or mortgage. He found this not rigorous enough. I read that and thought of people who get drunk in Las Vegas, meet and marry, who then have more rights than a couple who gave each other their lives for seventeen years. The governor said if the legislature wants a domestic partnership law, they should have a straight-ahead bill. And then he added what seems to be the real reason for this heartless act, his abhorrence of the gay and lesbian citizens of this state asking for civil rights, and his fear that any slight act of decency will feed the rising call for marriage equality.

Frankly, I hope the governor’s casual act of cruelty will indeed fire not only those already committed to the enactment of civil marriage reform within our state, but also show those who have been up to now indifferent or even uncomfortable with the call to marriage equality, to see what is really going on. Which is an ongoing effort on the part of those who seek to maintain the status quo, to block any move toward civil rights for our gay and lesbian citizens. This is a concerted effort to drive them back into the shadows. Shadows where they are not really citizens of this nation. Shadows where they are not really human beings.

I write as a working parish minister. I’ve witnessed the wounds that follow this harsh treatment of people who are just like everyone else, except in the object of their affections. These are our neighbors, these are our friends, these are our children. And I see no justification for this sort of shabby treatment, of which the governor’s veto being only the most recent example. Absolutely, society is not served by creating or perpetuating a class of people who do not enjoy the rights the rest of us do. This is so sad. This is so cruel. This is so unnecessary.

I look forward to the day when we achieve full civil rights for BGLT people and when this nightmare of injustice becomes a matter for history books.

Standing on the side of love.

November 11, 2009 Briefest on the Eleventh Hour of the Eleventh Day of the Eleventh Month
Recent Comments
0 | Leave a Comment
"I have it on reliable authority (i.e., you) that Dogen himself wrote:Coming, going, the waterbirdsDon't ..."
cushing Recalling the Buddhist poet and general ..."
"Is this the Daido Loori video you mean? (You've linked twice to Daisin Morgan). https://www.youtube.com/wat..."
Kenneth Sutton Zen Meditation: Basic Instructions
"Rev. Hunt was my Great Grandfather. I was blessed to have spent time with him ..."
William Hunt Bennett Ernest & Dorothy Hunt: Early Links ..."
"Alan Watts. I happened to purchase "This is It" primarily because of the unique book ..."
Ed Papson Recalling the Trickster Sage Alan Watts
Browse Our Archives
Follow Us!