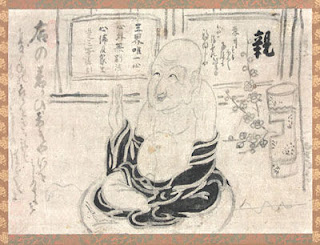 A friend in a recent blog posting referred to a deep question he was pondering as an “honest koan.” As later today Jan & I are going to the Los Angeles County Museum of Art to see an exhibition of the work of the great koan master Hakuin Ekaku, it set me to thinking, once again, about how the word has been transformed within American English. He, and a host of others, including Zen teachers, although Zen teachers who’ve not engaged in the discipline of koan introspection, have come to use the word koan to stand for “a particularly thorny question.” Actually I’ve even seen koan downgraded to simply be a synonym for “a question.”

In several senses this use is not wrong.

First, language is mutable. It shifts and changes and is put to uses other than originally meant. And so what? Well, one does need to be a bit careful. The word “prevent” as used in the King James version of the Bible means “to lead forth.” But, with koan we’re nowhere near shifting the meaning to its opposite. So, again, so what?

Well, second, words can have multiple uses, slightly different, for different purposes, or within different specialized disciplines. Look at any dictionary. There are for many, most words, a number sometimes a veritable host of different meanings.

And, here, the use of the word koan to mean question or thorny question is at base true enough.

The word comes from the Chinese  gong an and translates literally as “public case,” as in a legal document. It is applied to exchanges between Zen teachers and students or other Zen teachers which can range from a word such as “Mu” or “No” to  rather long narratives with a number of wato or “word head,” pointing to something particularly important on the Zen way. In fact the American Zen master Robert Aitken suggests a koan is “a matter to be made clear.”

Here we get a bit closer to the heart of the matter. Here koans are set to open us up, to take us some place. Or, perhaps a bit more accurately they become fingers pointing to the moon, pointers, giving us a direction for our own walking.

They are human devices. Nothing from gods. And therefore not infallible. And like that other tool, the axe, they can be used in any number of ways.

Although it’s also important to note they’re not merely expedients, either. It’s that invitation. They and we become together. We open together.

Also, and this can be hard. I’ve observed how they don’t stand on their own. People can answer koans and remain bad people.

No one is precisely sure where koans as a spiritual discipline come from. The scholar and Zen priest Victor Sogen Hori believes they may have their distant origins within Medieval Taoist drinking games where someone starts a poem and someone else must “match it” in a way acceptable to all concerned. This appeals to me and I like to repeat it as fact. It might well be.

It appears when the discipline first emerged a person was given one of these koan and would then ponder it for, well, pretty much a life time. Occasionally one would check in with a spiritual director, but largely the deal was the responsibility of the person who had taken it on within their life. It became part of the basket of meditative disciplines practiced within the Zen schools. (Zen is another word that has taken a bit of a beating in popular American English usage. It’s literal meaning is “meditation,” and it refers to a cluster of schools that began in China and eventually immigrated to Korea, Japan, Vietnam and now to various Western cultures.)

Pretty soon teachers began using a number of koan both as subjects for talks and as objects of meditation, picked out for the particular needs of particular students.

Here I offer my own definition of a “real” koan, a koan as used within the koan schools of Zen: a koan is a statement about reality and an invitation to a response. This response is given to a koan Zen teacher who then affirms or does not the response. At the beginning mostly the responses fall into the “does not” category.

Now koans are also used as the subject for conversations. Many “pure” Soto teachers who do not use them in the sense just described do use them, both as objects for talks and as the subjects for discussion within small groups. Recently here in the West teachers trained in what I’d consider the more precise usage have also encouraged people to engage them in this way, as subjects for discussion. No harm, no foul.

But, then, there is that direct pointing. And actual competent guidance. The conversational koan engagement has come in some circles to be called “koan study” and that more focused and demanding discipline, where one can pass or not, “koan introspection.” Some distinction regarding these two ways is important, I think. And this is as good as any.

As long as we’re on the ways koans are understood, there are folk who consider koan something that can be done separate from the practice of just sitting. Of sitting down, shutting up, and paying attention. I am not one of those. Koans nestle within the great practice of shikantaza, just sitting. We begin with just sitting. At some point koans enter that place. And eventually we return to just sitting, or something very, very close. One of the first koans is called “Mu.” In my school most of us begin with it. And, at some point we refer to the place we’re practicing as shikan-mu, where we can’t tell if it is Mu or if it is shikantaza.

This place is the field of possibility, the womb of the universe, the realm of awakening. Fancy words for something terribly important for us to find.

I hope you’ll like to explore it some day and find that country of which our ancestors sung.

At first the koans were collected in spiritual biographies of prominent Zen masters. By the thirteenth century anthologies of koans began to be published. The Gateless Gate, the Blue Cliff Record and the Book of Serenity principal among them. Since then new anthologies have been published perhaps in every generation.

By the time Hakuin Ekaku was born at the end of the seventeenth century Zen masters were using long lists of koan that students were expected to “pass.” Hakuin would come to be associated with this systematization and gave his name to it. In fact the two principal streams of koan introspection study that inform pretty much all koan introspection practice today  would be named for two of his students students.

(There is a modern systematization in the West not directly informed by Japanese koan work taught by successors of the Korean master Seung Sahn. In my cursory exploration of it, I am impressed. It is clearly influenced by the Hakuin system, but precisely how is hard to say…)

The lists could be quite long. The traditional, mythic term is seventeen hundred. In matter of fact most koan introspection lists are somewhere in the vicinity of four or five or six hundred. Although they can be sliced and diced, remember those various points to be found in some koan, many koan, and each could be counted as one. Anyway, one encounters a lot of koans in koan introspection practice. Ten, twenty, thirty forty years to work through them for most of us. I took twenty.

So, what does one encounter in a koan?

People with a little time on their hands have attempted to categorize koans. Hakuin suggested five categories. Others more or fewer.

Me, I suggest two kinds. First koans, koans that are concerned with helping us find our place within our original boundlessness. And then koans that explore various aspects of boundlessness and particularity – the great dance that is our lives. Over and over again.

Without a doubt koans can be sliced and diced more particularly than this. For instance Hakuin introduced what he called “nanto,” which seems to translate as “fucking hard” koan. I think he identified eight. Although Hori Sensei seems to have found ten or so of the eight, and so, we don’t appear to have a good grasp on this. Again, I like it. One Zen master suggested these eight or ten or whatever were particularly hard koan for Hakuin. Suggesting, and it has been my experience, that we each will find our own Nanto as we walk this koan way…

This is powerful stuff.

It is about who we really are.

And, I hope, while koan becomes an English synonym for thorny problems we don’t forget these are also an invitation from our ancestors, to look deeply into our hearts, somewhere past questions, and even thorny questions, to the place where all questions arise and where all questions, at least those of meaning and purpose, of who and what we are, may be resolved.

As we’re about to go off to see some of Hakuin’s art, let me conclude with an invitation. Hakuin drew upon a passing line, itself a comment on another koan, and created one he used, and which continues to be used in the Zen lineages that descend from his work, including mine.

My great ancestor observed how we notice the sounds of two hands clapping. He then asked, “What is the sound of the one hand?”

Well, then, come to a Boundless Way retreat. We have several teachers who can check it for you…

July 10, 2011 Confession of a Buddhist Atheist: A Review
Recent Comments
0 | Leave a Comment
"Thank you, Oliver. Always nice when you drop by the blog..."
jamesiford Recalling the Catholic Nun & Zen ..."
"Sounds like a person I'd have liked to meet.Thanks for posting and your effort in ..."
Oliver Oehm Recalling the Catholic Nun & Zen ..."
"Thank you, Satya!"
jamesiford The Peace of the Rhinoceros: A ..."
"A couple of dates need to be corrected in this article—specifically, his marriage date and ..."
Kevin Mullaney A Vision of William Blake: The ..."
Browse Our Archives
Related posts from Monkey Mind