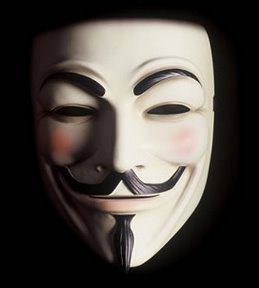 Wikipedia tells us “Guy Fawkes Night, also known as Guy Fawkes Day, Bonfire Night and Firework Night, is an annual commemoration observed on 5 November, primarily in Great Britain. Its history begins with the events of 5 November 1605, when Guy Fawkes, a member of the Gunpowder Plot, was arrested while guarding explosives the plotters had placed beneath the House of Lords. Celebrating the fact that King James I had survived the attempt on his life, people lit bonfires around London, and months later the introduction of the Observance of 5th November Act enforced an annual public day of thanksgiving for the plot’s failure.”

Now one of the regular features of Occupy Wall Street and its various spin offs are the Guy Fawkes masks people like to wear.

The masks in fact come from the movie “V for Vendetta” As another article at Wikipedia tells us, “The film had been seen by many political groups as an allegory of oppression by government; libertarians and anarchists have used it to promote their beliefs. Activists belonging to the group Anonymous use the same Guy Fawkes mask popularized by the film when they appear in public at numerous high-profile events, emulating one of its key scenes. During the Occupy Wall Street and the whole ongoing “Occupy” protests, the mask appears internationally being used as a symbol of popular revolution. Artist David Lloyd is quoted saying: “The Guy Fawkes mask has now become a common brand and a convenient placard to use in protest against tyranny – and I’m happy with people using it, it seems quite unique, an icon of popular culture being used this way.”

I’m sure Warner Brothers, who must make a little money off of each mask worn, are happy as clams to have become the face of revolution…

And, of course, in a world where everything is connected, irony becomes the commonplace of communication.

Sometimes I like it. But. Me, I’m not so sanguine about the Guy Fawkes mask part of the Occupy Wall Street movement, with its undercurrents of violence, and frankly, with its misdirected zeal. The movement that preceded Occupy was the Tea Party. Ordinary folk who knew something bad was happening, but tricked by various means, including our American fantasy that each of us will, tomorrow, have a shot at getting rich, bought into the story that our problems are governmental overreach is the classic example of misdirected zeal.

As far as I’m concerned, while government has problems, lots of problems, the real issue is unconstrained wealth, and in particular the lack of regulation where it really matters, with the subsequent relentless grinding down of the many by the few.

Now, government does more represent the rich than the rest of the population. Of course. But, the solution, the only solution short of violence, and frankly, violence rarely leads to anything of value, revolutions have the unpleasant habit of eating their children, is shifting that of course the government is in the hands of the few.

The solution, our solution is the reclamation of government by and for the people.

We want freedom, we must own the government. And the system in place, with all its flaws, oh God, all those flaws, can be taken by the power of votes.

A small irony, don’t you think.

Now, back to Guy Fawkes. I think there’s a warning here for those who care for change along healthy lines. Today Guy Fawkes is a charming image. But it may be wise to look into its roots in anti-catholic sentiment in seventeenth century England, hatred which gradually blended with older festivals of the day, principally, it seems Samhain. And, its power has gradually been replaced by the celebration of Halloween. I find the mask a celebration of cooption…

I suggest we’re looking for something less likely to be taken over, simply another way for corporations to make money, a popular holiday for a while, a lark…

I hope the focus will sharpen.

I hope the energy of Occupy Wall Street will shift from street theater (as interesting and sometimes edifying as such may be), eschew the constant temptation to violence (God, there are so many who want that…), and begin to focus on elections.

Getting people into office who see the problems and are willing to work toward a solution.

Let me not put too fine a point on this. Defeating Republicans and electing Democrats. Yes, Democrats are also in the pockets of biggest business. But, the party has a left wing, as left wing as we have in our country, and truthfully left wing enough for me; find those people and support them. And if where you are, you can’t get them into office, support the more moderate Democrats – who will be on our side more of the time. Push the party to the left. But get them into office.

This is something that might actually turn the course of the great ship that is this nation, away from the rocks and toward the safe harbor.

I have my hopes.

Of course, also, always, this is a world filled with irony…

It’s our country. Take it back…

November 5, 2011
Marking the Passing of a Professional Old Coot
Next Post

November 6, 2011 HOW TO GROW A SOUL: A Meditation for Unbelievers
Recent Comments
0 | Leave a Comment
Browse Our Archives
Related posts from Monkey Mind