Case 28 of the Book of Serenity: A Baptist Koan 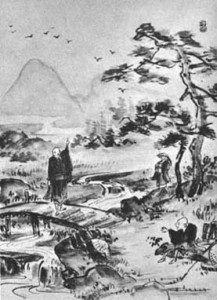 Me, I was raised a fundamentalist Baptist. We thought Southern Baptists were dangerously liberal. And, most in our crowd knew Northern or American Baptists weren’t really Christian.

My lasting take away from this childhood is a certain discomfort with my body and a deep and abiding understanding of shame.

So, many, many years later it was with a certain amount of trepidation and, okay, delight to stumble upon the twenty-eighth case in Hongzhi Zhengjue’s lovely anthology The Book of Serenity, “Huguo’s Three Shames.”

The narrative is a pretty straight forward Zen presentation.

A student of the way comes to master Huguo Jingyuan and asks, “What about when a crane perches on a withered pine tree?”

The master respond, simply enough, “It is a shame when seen from the ground.”

The student comes at the matter from another angle, “What about when every drop of water is frozen?”

The master meets him, “It’s a shame after the sun rises.”

The student tries for a third time, “How about during the great suppression of the Dharma, in the wake of the blood and terror, where was God then?”

Huguo opened his heart and responded, “On both sides of the great gate, they should be ashamed.”

First a couple of thoughts about the set up. The student presents a nicely poetic version of the perennial question for those of us on the way. What about awakening? When you strip away the pretty words, what is it about?

And here we get the first shame.

Now, I understand we children of the West, Europeans and particularly Americans, are supposed to come from a guilt-based culture, as opposed to a shame-based one. I’ve never fully understood what is being pointed to in that regard, as I have understandings of shame that run to the very core of my being.

What I would suggest is that Huguo, who first mastered the arcane philosophical systems of the Tentai traditions before undergoing Zen training, that, in the best Zen tradition, he is taking the wound we all feel, that sense of shortcoming, of failure of self and family and offers it anew.

Here everything we feel bad about is brought forth.

In some ways an old Zen ploy. But, playing our way through the cases, we’re invited, over and over again, in a sense like Peter Pan, to discover anew the old wounds, and the new possibilities. But unlike the perpetual boy, we’re invited to slip each time a tiny bit deeper into the matter.

So, when shame is exhausted, then what?

When awakening has played its course, then what?

The student of the way is not to be deterred, and he tries, she tries again. This time with another convention of our way, another angle onto into the matter of our heart’s pursuit.

What about when we’ve disentangled from the mess?

And we’ve found the great glacial?

And again Huguo brings it back, brings us back. What about when we return to the world? Where are those bliss bestowing hands then?

I think with that the student has a glimpse of the matter at a deeper level. Certainly the question turns in another direction. Here all the hurt is revealed. What shame really is. He asks about when our loved ones are murdered, and our way is crushed under the heel of tyrants, when we find no place to rest our head, when all that is holy seems to drain away from us like water swirling and disappearing down a sink, when as it says in the original “the guardians have abandoned us,” or as we might more comfortably say in Western and American culture, when God has left us, and our children die, what about the matter then?

And, my Baptist heart resonates with the master, with Huguo who sings from the heart of it all the deep truth that turns nothing away, on both sides, great open and the great mess, there is only shame.

So, on this lovely morning, when the sky breaks blue, and the radio whispers a snow storm is on its way in the next hours, what about then, what about now?

What is your shame?

What doesn’t turn away?

How are you free?

February 9, 2012
Decoding Keys to a Happy Life
Next Post

February 11, 2012 Professor York Looks for the Devil at the Unitarian Universalist Church
Recent Comments
0 | Leave a Comment
Browse Our Archives
Follow Us!

Buddhist
RACISM, MURDER, & ZEN: Or, When is Silence...
Monkey Mind