Nisargadatta Maharaj as a Mind Bubble 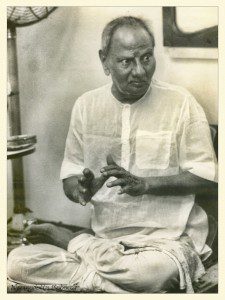 Some years ago I was at the installation for a colleague as minister of a Unitarian Universalist church. These things can go on for quite a long time, and I have to admit my mind wandered on occasion. Until, that is, someone quoted a Hindu sage by way of passing on some advice to the new minister.

I thought how amazing. What a simple summary of the two truths I’ve found as the way of liberation for my own heart, and how they become one in the living.

So, I pursed the source of the quote. Nisargadatta Maharaj was a lay master of Advaita Vedanta, which I understand arose within Hinudism as a response to Buddhism’s relentless critique.

According to Wikipedia his life practice was simplicity itself. In a collection of his talks published as I Am That, he wrote, “My Guru ordered me to attend to the sense ‘I am’ and to give attention to nothing else.” He added how he “did not follow any particular course of breathing or meditation, or study of scriptures.” Instead, “Whatever happened, I would turn away my attention from it and remain with the sense ‘I am.'” He concluded, “It worked.”

My own discipline is similar, although I would caution anyone about that “turning away,” that it isn’t found in rejection, but in opening wider. Which, I feel, I can see in the rest of the paragraph summarizing his practice. But, I am reading it through the eyes of a Zen practitioner.

In any case, a fascinating teacher, worth checking out, I think.

Yesterday was his birthday. He would have been one hundred, sixteen…

By the bye there is a ton of stuff about him on Youtube.

April 17, 2013
Colbert on the Boston Marathon Bombing
Next Post

April 19, 2013 We'll See: A Brief Meditation on Change
Recent Comments
0 | Leave a Comment
"I'm sorry to begin with an act of self-advertisement, but everything I want to say ..."
Charles Upton Frithjof Schoun & Traditionalism
"this site will not unsubscribe me so i'm getting back MY way. HAHAHAHAHA! https://uploads.disquscdn.c..."
Robert Willis Water and Light Soaking into the ..."
"i KNOW that ALL religions are for people that were indoctrinated as children and still ..."
Robert Willis Water and Light Soaking into the ..."
"Ive seen more and more Chirstian Buddhists. I wondered why Buddhists have lost their compassion ..."
Brianna LaPoint Zen Meditations on the Mysteries of ..."
Browse Our Archives
Related posts from Monkey Mind

Buddhist
Galileo, Zen, and the Ways of Not Knowing:...
Monkey Mind
TRENDING AT PATHEOS Buddhist