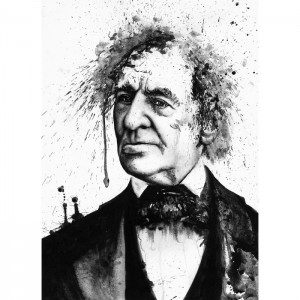 American Transcendentalism was in fact a theological and spiritual revolution that totally transformed American Unitarianism. It was only incidentally a literary phenomenon, not unlike the way Zen Buddhism when it came to Japan transformed that country’s literature and arts.

There are any number of moments that could be supposed to be the “beginning” of Transcendentalism. The 1836 publication of Emerson’s essay Nature is probably the most common.

I would suggest as Transcendentalism was never really about one person it probably was the gathering of what would come to be called the Transcendentalist Club in the same year called together by the Unitarian minister in Roxbury, George Putnam. They met at first at the home of the lay Unitarian George Ripley, and later at the bookstore owned by Elizabeth Peabody. Among the members besides those already listed were Sophia Ripley, Frederic Henry Hedge, Margaret Fuller, Bronson Alcott, Orestes Brownson, Ellen Sturgis Hooper, Theodore Parker, Henry David Thoreau, William Henry Channing, James Freeman Clarke, Christopher Pearse Cranch, Convers Francis, Sylvester Judd, and Jones Very.

All this said another date, absolutely, could be the day that Ralph Waldo Emerson, a Unitarian minister who had resigned his pulpit saying he could no longer administer the Communion service, gave a talk at his alma mater, Harvard Divinity School.

In some ways I think this the great moment. Because it was here the “new infidelity” was brought home to the institution of Unitarianism.

While Unitarianism had rejected the trinity and focused salvation on “character,” on the actions of the individual in her or his life rather than through a vicarious atonement achieved by Jesus’ death, it was nonetheless deeply rooted in biblical Christianity. Indeed the rejection of trinity was mainly because there was, beyond a Medieval interpolation, no explicit statement of a trinitarian doctrine in the scriptures.

Emerson’s Divinity School Address delivered before the graduating class of the school on the 15th of July, 1838, dismissed the idea that the reports of miracles in the scriptures were proof of the truth of the teachings to be found within them, and with that explicitly rejecting the necessity of scripture as divine revelation. Instead he declared that the intuition of the individual was sufficient to find one’s way.

This created a firestorm within Unitarianism. A fire that has not yet burned itself out.

While there would be a variety of views held among the Transcendentalists, personally I’m much more influenced by Henry Thoreau’s “thing in itself” than Emerson’s platonism, one thing was certain. In this crowd of New England Unitarians, something incredibly important was happening.

Something that would influence, for good and for ill, the rising spirituality of America.

So, a pause, at one of those moments we can say was the beginning of it all…

July 16, 2014 A Brief Reflection on Toushuai's Three Barriers
Recent Comments
0 | Leave a Comment
"this geelong seafood blog is great. geelong seafood"
John N LIVING IN THIS FLOATING WORLD: A ..."
"https://www.youtube.com/wat..."
Robert Flannery Narcissus Drowned: The Zen Priest Takes ..."
"long live Theo-poetics! and universalism! and so on and so forth!"
Roger Butts That New Universalism: A Smallest Meditation ..."
"Thank you, James. You explained prayer to me as a way even I could accept. ..."
Ohyetwetrust A Meditation on What My Grandmother ..."
Browse Our Archives
get the latest from
Monkey Mind
Sign up for our newsletter
POPULAR AT PATHEOS Buddhist
1