Guifeng’s Five Styles of Zen, and Mine 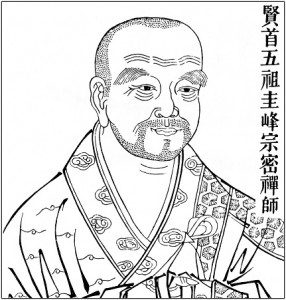 I was talking with a friend about the mistakes we sometimes make in Zen, and I recalled something on the subject I’d read in the Three Pillars of Zen. When I found it I saw it was actually a reflection on Guifeng Zongmi’s (called Keiho Zenji for Great Master Keiho Shumitsu in the book) classification of five styles of Zen, contained in some lectures by Hakuun Yasutani Roshi. And in fact it isn’t five mistakes in Zen, but rather five approaches to Zen, although each containing subtle errors one needs to be wary of on the way.

Guifeng Zongmi lived and taught between the late eighth and early ninth centuries, and was considered a great scholar as well as a teacher of considerable merit. We in the Zen schools actually have to share him with the Huayan, or Flower Ornament School, which considers him their “fifth ancestor.” He was particularly concerned with the level of polemics between advocates of sudden awakening and gradual cultivation within Zen, and offered a subtle and, I feel, very important corrective.

Actually his five styles, with the possible exception of the first are only subtly different each from the other. Each, and I think actually even the first, offers something important. Although each has those traps, as well.

Worth reflecting on by anyone embarked on our way, I feel.

First Bompu Zen, called “ordinary” Zen is Zen taken on for personal well-being, for physical or mental health. Something very common, actually. Many people come into a zendo because they heard they could lower their blood pressure through meditation. This might be considered secular Zen. It’s mostly focused on the cultivation of concentration. In our contemporary Western culture, while not Zen, Mindfulness Based Stress Reduction, as developed by Jon Kabat-Zinn and his associates could be seen as a sort of “Bompu Vipassana.” There is nothing wrong with this, and actually many people who start taking on Zen for reasons of health, mental or physical often eventually shift to more traditionally spiritual purposes. Yasutani’s critique of the Zen version of Bompu is that while the disciplines have many advantages for people, looking to these improvements in one’s life alone, one remains stuck in the fundamental dualistic problem of our ordinary confused state. That concern with fixing things, falls well short of what Zen is in fact offering.

The second of the categories of Zen is Gedo, or “outside the way.” It is the adaptation of Zen within religious but non-Buddhist contexts. (Some think this is my Zen, but that’s because they misunderstand the nature of Unitarian Universalism, which welcomes me fully as a Buddhist…) Here we see the practices of Zen taken up by Christians, including clergy. I’m very much impressed with much of what I’d call “Christian Zen.” But, while my experience of this approach to Zen by practitioners of other traditions is generally positive, helping people to deepen their own spiritual path, Yasutani Roshi warned how traditionally this is more about people cultivating supernatural powers, and particularly building up joriki, the power of a focused mind. This can be a serious digression from the “point” of Zen, and because it has such power about it, can be seductive, so much so, that people caught up in the glamor of joriki forget, again, where Zen actually can take us.

The third is Shojo Zen, focused on the advantages to the self. Traditionally Shojo is also called “Hinayana Zen,” which gets it tangled in the polemics between the two great schools of Buddhism, the Mahayana, the self-declared “Greater” vehicle, and the Southern or self-described Theravada, “school of the Elders,” with the great vehicle folk calling the school of the Elders the “small vehicle,” the Hinayana. Rejecting the idea that the Theravada is a small vehicle, we also need to let go of the laden term Hinayana. But beyond the polemics there is a style the term appropriately applies to, a genuinely “smaller” way, a self-centered, selfish approach, where one is concerned exclusively or more generally largely with one’s own state, with one’s own peace of mind. Again, it is a form of dualism, missing the genuine invitation of the Zen way.

Next is Godo Zen, or, “Buddhist Zen.” This is the Zen of awakening. It is found in the rising of the Bodhi mind that desire to awakening to what is, for which the “gaining mind” dream of awakening is often a gate. Handled properly that gaining mind becomes Bodhi mind, and within that movement is the Godo approach. It is the Zen of koan introspection. But, also, it opens our deepest insight into what zazen is, where, as Yasutani Roshi cites Dogen Zenji, “the more deeply you experience satori, the more deeply you perceive the needs for practice.” This is the manifestation of what is sometimes called “practice/awakening,” as the very heart of shikantaza, just sitting.

And, finally, there’s Saijojo Zen, where striving and realization itself are found to be one. This is the Zen of the Buddha, actually of all the buddhas of past, present and future. It is the Zen of “returning to the world with bliss bestowing hands,” where what we do and who we are becomes the simple manifestation of awakening. This is also the way of pure shikantaza. Its danger is the seduction of just sitting without awakening, where the actual experience of the leap beyond self and other remains an idea rather than one’s life.

Yasutani Roshi comments how these last two forms of Zen are complementary, and properly engaged show two avenues to the same place. Where the way of kensho and koan leads to the subtle wisdom of just sitting, and how just sitting becomes the koan “sit down and become Buddha” and can fully awaken the heart mind.

With these last two approaches and the possibilities of reconciliation of the two great Zen schools, I find the heart of my own life. Here my practice is grounded in shikantaza, just sitting. But my genuine appreciation of the practice, and how I’ve avoided slipping into unhealthy places that just sitting can go, or, when slipping, returning fairly quickly, came about through my dedication to koan introspection over many years.

Or, I could just as easily tell the story by saying my years of just sitting preceding my taking up koan introspection allowed me the spaciousness of place that when I engaged koans I didn’t follow them down the mind road, or when I did, I fairly quickly returned.

Aitken Roshi used to speak of his practice as being “shikan-mu.” That is, as I understand it, that he could no longer distinguish between his practice being shikantaza or sitting with Mu, the primary koan.

That is my sitting.

March 5, 2015 Zen in Western Poetry: Starting a List & Taking Names
Recent Comments
1 Comment | Leave a Comment
"I believe I read 15 of his books as well as attending a "waking meditation" ..."
Paul Lee Thich Nhat Hanh Dies
"Wonderful to see Richard Rolle getting more attention. While some consider him a less worthy ..."
Friar Preacher Recalling the Ecstatic English Mystic, Richard ..."
"My only concern with the Jesus Prayer is that one must, in saying it, admit ..."
True Selfie Close Enough for Government Work: Zen ..."
"I don't think the writer really does "get what execution means", as claimed toward the ..."
Martin Purdy An Insatiable Inclination to the Truth: ..."
Browse Our Archives
get the latest updates from
Monkey Mind
and the Patheos
Buddhist
Channel
POPULAR AT PATHEOS Buddhist
1