He Drew A Circle 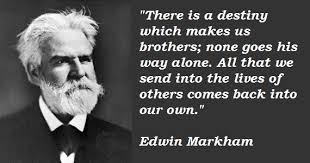 Charles Edward Anson Markham, better known as Edwin Markham was born on this day in 1852. He was officially the poet laureate of Oregon between 1923 and 1931. He had also been called the poet of labor. And, what touches me most, the “poet laureate of Universalism.”

Beyond my spiritual circles it his poem “The man with the Hoe” that is perhaps best remembered, and it is the poem that earns him that association with labor. But, also he was invited to read his poem “Lincoln, Man of the People” at the dedication of the Lincoln Memorial in 1922. While perhaps not so well remembered today, he was highly respected and honored in his lifetime.

Of course it is the religious connection that I think of mostly.

While I find a few references that state outright that Markham was a Universalist, or even a life long Universalist, I notice most draw a somewhat finer line, saying he was a frequent attender at Universalist worship services, and that he was buried from the Universalist church in Brooklyn. It would appear his earliest spiritual influence was from Thomas Lake Harris, a one time Universalist minister, and by the time Markham knew him, a spiritualist, and socialist activist. It’s clear Markham took a path exploring the range of spiritualities available in his time, including spiritualism and Swedenborgianism. But later, I would like to say in his mature years, whether he formally joined or not, he was actively associated with that Brooklyn congregation, from which, most tellingly, he was buried. Push comes to shove, there can be little doubt what were his spiritual sympathies, particularly in his later years.

And, I have to say is how much my sympathies are with him. Especially I am moved at how he saw his spirituality and his political life intertwined, perhaps even in some profound sense, one. And it was that spirituality of inclusion, the great heart of the Universalist way that called him to stand with the poor and the dispossessed.

This is a dangerous path. I think of the various people condemned within my circles for joining their spirituality to the politics of their day, most especially Zen teachers of my Zen teachers who were fervent Japanese nationalists during the Second World War. From where I stand they not only made wrong choices, they justified some pretty horrible things through appeal to some deeper truths. Gives me pause. At the same time I think any religion divorced from the questions of the day, that are not applied, well, they’re worse than useless, they’re an affront to human dignity, they make religion at best a fantasy. For me the meeting of spirituality and the world become the great test. Is what moves our heart, also moving our hand? And if it does, to what does it move our hand? We need to watch every moment.

Caution is called for. And hesitation.

So, perhaps we need to choose our spirituality carefully. To the degree we can choose such things. My experience is that the heart has its own reasons, most of which are not actually accessible to our conscious minds. Mostly our explanations follow not precede our beliefs. But however we come to our stance, we must be watchful. And we need to be ready to modify, and on occasion, perhaps, even walk away from some things we once held dear. And, yes, this is a hard thing. Maybe even the hardest.

The good news for those truly committed to the path of the real is that in the action the truth of our beliefs are revealed.

And we can change. Hard. The hardest. But we can…

And, if we’re lucky, or, maybe the word is blessed, then we see good following.

And, with that, his great poem of Universalism, “Outwitted,” is what I most find myself thinking of at the moment.

More an epigram than a poem, it contains a challenge, and an invitation…

I can think of dangers in this view. But, you know, there are dangerous everywhere.

And sometimes you just have to pay your money and take your chances.

And, you know, in the last analysis we all will be dead.

Go for the big circle.

April 22, 2015
On the Preservation of the Species: A Mind Bubble on Earth Day
Next Post

April 24, 2015 Do Not Deny, Do Not Forget
Recent Comments
0 | Leave a Comment
"This article is fascinating to me, having an earlier career in counseling and psychotherapy. I've ..."
Howard Pepper Think of me as a Pseudo-Jungian: ..."
"Jung first foremost was an artist. So he was never doing actual "science" in that ..."
davidt Think of me as a Pseudo-Jungian: ..."
"Beautiful. Thank you. One piece that I claim some knowledge of is just war. You ..."
PhillipWynn WHO WOULD YOU BE BURIED WITH?
"happy birthday old scout! how true the pome! my 73rd is this coming september 29th: ..."
Brian McInerney The Zen priest recalls a poem ..."
Browse Our Archives
get the latest from
Monkey Mind
Sign up for our newsletter
POPULAR AT PATHEOS Buddhist
1