Margaret Burbidge Tells Us We are All Stardust 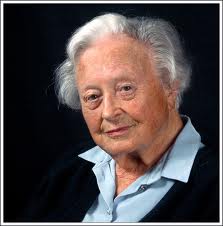 Eleanor Margaret Peachey was born on this day in 1919, in Davenport, Greater Manchester, England, turning 96.

She is better known by her married name Margaret Burbidge. She studied astronomy at University College, London, earning her bachelors in 1939 and her doctorate in 1943. She and her husband George, also a theoretical astrophysicist, worked as a team.

The lists of her awards is very long. Among her accomplishments are many firsts for women in science.

She, George, William Alfred Fowler, and Fred Hoyle working from original research by Margaret & George, developed the B2FH (named for the participants) theory, or more technically the stellar nucleosynthesis theory that all but the very lightest elements were produced within the hearts of stars.

And, of course, among many other things her work means you and I are the children of the stars…

August 13, 2015 Servetus is Arrested
Recent Comments
0 | Leave a Comment
"I'm sorry to begin with an act of self-advertisement, but everything I want to say ..."
Charles Upton Frithjof Schoun & Traditionalism
"this site will not unsubscribe me so i'm getting back MY way. HAHAHAHAHA! https://uploads.disquscdn.c..."
Robert Willis Water and Light Soaking into the ..."
"i KNOW that ALL religions are for people that were indoctrinated as children and still ..."
Robert Willis Water and Light Soaking into the ..."
"Ive seen more and more Chirstian Buddhists. I wondered why Buddhists have lost their compassion ..."
Brianna LaPoint Zen Meditations on the Mysteries of ..."
Browse Our Archives
Related posts from Monkey Mind