The Karma and Rebirth Debate Within Contemporary Western Buddhism: Some Links to Follow 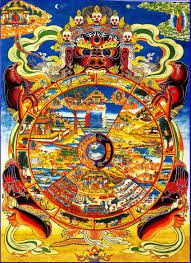 Way back when he reviewed the Buddhist monk Stephen Batchelor’s lovely book “Alone With Others,” The Western Buddhist John Blofeld wrote an introduction praising the young monk scholar and his writing. Blofeld went on to say it was unfortunate that Batchelor did not touch upon the critical doctrines of karma and rebirth, but understood there is only so much one can do in one book. He added how he hoped Batchelor would turn to the subject some day. Some years later, after Blofeld’s death, Batchelor did.

Before we get to Batchelor it is probably best to have some understanding of the doctrine. A very good overview from an unabashed believer is Thanissaro Bhikkhu’s The Truth of Rebirth And why It Matters for Buddhist Practice.

While questions regarding the centrality of place within Buddhism for the doctrines have been knocking around for a long time, Buddhism Without Beliefs has become the standard Western critique of these ancient doctrines. Batchelor continues to evolve and at this point to understand Batchelor’s position one probably also needs to read Confessions of a Buddhist Atheist.

B. Alan Wallace wrote a scathing critique of Batchelor and his thesis in an essay Distorted Visions of Buddhism: Agnostic and Atheist.

Batchelor responded with an Open Letter to B Alan Wallace.

Stephen Schettini writes of this debate and offers some helpful perspectives, I feel. Although it needs to be noted he really falls into the “Batchelor” camp.

For that matter, so do I. In addition I offer a peek at what a Buddhism that does not believe in a literalist karma rebirth paradigm might look like.

Hope these are helpful.

September 1, 2015 A Trip to the Moon
Recent Comments
0 | Leave a Comment
Browse Our Archives
Related posts from Monkey Mind