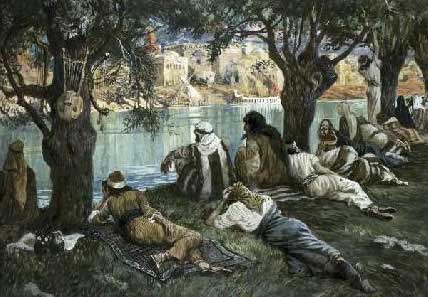 The good folk at Wikipedia say that it was this day in 539 before our common era that Babylon fell to Cyrus, who came to be called the Great. Cyrus is one of those signal figures in history, a warrior king who established something, actually many things that lasted beyond his reign, some reaching into modernity. Most scholars rank his importance as equal to that other “great,” Alexander.

But for me the interest is religious.

While he was probably a Zoroastrian, at least nominally, Cyrus seemed to go out of his way to show respect for all the religions within his empire. Including one religion that had formed in Babylon among a small contingent of Canaanites who had been carried captive there two generations before, and who while there had gathered fragments of spiritual literature, mostly although not exclusively from their own traditions, massaged them, added in a wondrous story of their captivity retrojected back to ancient Egypt, edited some more, and produced a sacred text that would come to have an enormous effect on Western culture.

And, Cyrus would be the linchpin for this to happen.

According to Ezra, who many scholars think was the principal editor of the new book, “In the first year of King Cyrus, Cyrus the king issued a decree: ‘Concerning the house of God at Jerusalem, let the temple, the place where sacrifices are offered, be rebuilt and let its foundations be retained, its height being sixty cubits and its width sixty cubits; with three layers of huge stones and one layer of timbers. And let the cost be paid from the royal treasury. Also let the gold and silver utensils of the house of God, which Nebuchadnezzar took from the temple in Jerusalem and brought to Babylon, be returned and brought to their places in the temple in Jerusalem; and you shall put them in the house of God.'”

And so the exiles returned to their home carrying with them that book, itself a little bit of history and a lot of dream. The Hebrew Scriptures contains much, not all of it healthful, but at its heart it is a story of exile and freedom, a great healing truth for many generations to follow.

October 11, 2015
WHAT TO DO AFTER YOU NOTICE ALL RELIGIONS ARE FALSE
Next Post

October 13, 2015 Paul Turns Seventy-Four
Recent Comments
0 | Leave a Comment
"I believe I read 15 of his books as well as attending a "waking meditation" ..."
Paul Lee Thich Nhat Hanh Dies
"Wonderful to see Richard Rolle getting more attention. While some consider him a less worthy ..."
Friar Preacher Recalling the Ecstatic English Mystic, Richard ..."
"My only concern with the Jesus Prayer is that one must, in saying it, admit ..."
True Selfie Close Enough for Government Work: Zen ..."
"I don't think the writer really does "get what execution means", as claimed toward the ..."
Martin Purdy An Insatiable Inclination to the Truth: ..."
Browse Our Archives
get the latest updates from
Monkey Mind
and the Patheos
Buddhist
Channel
POPULAR AT PATHEOS Buddhist
1