The Feast of Barlaam & Josaphat, the Luminous Religion, & the Idea of a Buddhist Christian Church 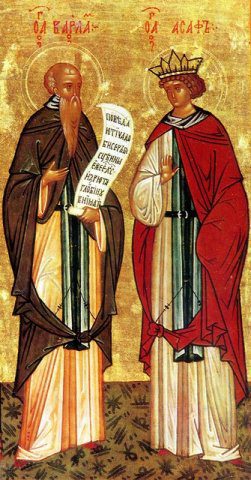 The other day I was pleased to see my favorite gnostic church is establishing a congregation in the greater Los Angeles area. Among the things I like about them is that they at times, at least from certain angles look like they’re trying to establish a Buddhist Christian church. A project I’m all for. I wish them well.

From time to time I speak of my “physiology of faith.” I claim to have a Buddhist brain, a Christian heart, and a humanist stomach. My faith, my spirituality is informed by my deep resonance with the analysis of the Buddha and particularly with the teachings of the masters of Chan Buddhism. But also and about equally by the many stories from the Bible which I learned at my grandmother’s knee. And then all of it washed through a deeply rationalist and this-worldly disposition.

And then there’s today. The 27th of November in the calendar of the Roman Catholic church as well as for those of the Eastern Churches who follow the revised Julian calendar, this is the feast of Sts Barlaam and Josaphat. The Orthodox who continue to use the Julian calendar observe the feast on 26th of August.

Actually, for the most part this holiday is no longer actually observed. The source for the official canonization of Barlaam & Josaphat, a story of the prince Josaphat and his conversion to the true faith through the guidance of the hermit Barlaam appears in the West in the eleventh century, apparently composed by the monk Euthymios, although attributed to the seventh century John of Damascus. In fact the story is quite a bit older than either the eleventh or seventh centuries. Variations on the story pop up all over the place, from the Golden Legend to Shakespeare’s Merchant of Venice. It is what one may call a classic.

But then in the nineteenth century scholars realized the true source of the story. The name Josaphat derived ultimately from the Sanskrit and means bodhisattva, “enlightenment being.” And they figured out the story, through some interesting turns, was really that of the Buddha.

While we can say with near certainty that Jesus never visited Tibet, or even India, there was in fact lots and lots of cross fertilization. For instance, in 1625 workers digging near a temple discovered a large stone monument. Local intellectuals began to examine it and discovered it recorded the story of a long lost Christian mission to China. Written in Chinese and Syriac it recounted the early Seventh century mission of Bishop Alopen and the establishment of the “Luminous Religion,” a Chinese branch of the Church of the East, sometimes called the Nestorian Church. What’s particularly interesting is how the tablet’s Christianity doesn’t quite line up with Nestorian orthodoxy in some interesting ways. The trinity, for instance, is mentioned, as is the incarnation, but there’s no reference to a crucifixion or resurrection. It was also clear that the Luminous Religion had synthesized with both Buddhism and most of all with Taoism.

All so tantalizing, but just this one large stone monument left as testimony to something long gone. It appeared that during the Great Anti-Buddhist Persecution in the middle of the Ninth Century, while it knocked Buddhism back on its heels, it also wiped out several smaller religious communities, including the Luminous Religion, which apparently the authorities considered a Buddhist heresy.

So, what the Luminous Religion actually was remained a delicious hint at something, but no one was sure of what precisely. Then on the 25th of June, in 1900 a Daoist monk stumbled onto a cache of manuscripts hidden in a cave near Dunhuang, an ancient city along that Silk Road. This discovery ranks with finding the Dead Sea scrolls and the Nag Hammadi library, and in fact in some ways exceeds them in importance. It proved a treasure trove of documents, some fifty thousand of them, in fifteen different languages, including at least one language that has otherwise been lost to the sands of history. Some of the Daoist and Buddhist texts are priceless, deeply re-orienting a world of scholarship. The cache also included the oldest printed book in the world, an edition of the Buddhist Diamond Sutra.

And it included texts from that long gone Luminous Religion, what have come to be called the Jesus Sutras. Sutra means thread, and is used in the sense of our shared Indo-European English’s “suture,” a binding thread. In Buddhism a Sutra is a sacred text. And while Christian, the shifts from normative Christianity are such that many feel “Jesus Sutra” a more accurate characterization of these texts.

Now the best single source about the religion and its texts for us is Martin Palmer’s The Jesus Sutras: Rediscovering the Lost Scrolls of Taoist Christianity. A scholarly study, although it is not without its critics, many of whom suggest he slants his translations in ways that are not warranted by the texts themselves, making the Buddhist and Daoist influences larger than is warranted. Me, I’m going for his version whole hog.

There are many significant features of this Luminous Religion. One that caught me quickly is the blending of Guanyin, who had already been transformed from an indigenous Chinese goddess into the Buddhist archetype of compassion, reshapes once again with Mary, becoming a heartful image that many of us who’ve experienced both Buddhism and Christianity, including me, have also found ourselves. I’m also taken with the integration of Christian and Buddhist liturgical practices, and most important of all I’m just astonished at the “new” Christian texts of the Luminous Religion, those Jesus Sutras using Buddhist and Daoist imagery and idioms, and with all that transforming Christianity into something for me now very exciting and compelling. Its worth noting how this also happened earlier in Chinese religious history when Indian Buddhism came to China and began translating its texts into Chinese using Daoist terminology, and birthing out of that, that whole new Buddhism that we call Zen.

The Luminous Religion was, as it were, innocent of Augustine’s terrible idea of original sin, instead embraced the loveliness of the world, and while celebrating the divine origins of their teacher, consistently emphasized his teachings as the truly important thing, describing a holy way of life. They embraced both reincarnation and karma. Now, as a rationalist turn, my Buddhism doesn’t actually include the classical Buddhist idea of karma and rebirth as our intentions leading to some sort of post-mortem reanimation. But, I see how easily this way can enfold a rationalist understanding. Very easy, indeed.

My friend the independent scholar Adrian Worsfold summarizes the Luminous Religion’s followers as “vegetarians, (who) promoted non-violence, charity, sexual equality, care for nature, and were (nearly uniquely in their world strongly) anti-slavery.” And, while it continues the Trinitarian formula for baptism, with the change of calling the spirit, “pure wind,” the Luminous Religion’s teachings otherwise appear to be pretty Unitarian, emphasizing “salvation by character.” Well Unitarian if Unitarianism emerged out of Christianity, and Buddhism, and Taoism streaming together as a new version of the ancient Watercourse Way.

While my Johannite gnostic friends do at places touch on this Luminous religion, their interests mostly take them in different directions. So, for now, for my lifetime in all likelihood, I will find the expression of my religion within the liminal space between modern Unitarian Universalism and Zen Buddhism.

But for the future?

November 28, 2015 A REFELCTION ON BUDDHISM, CHRISTIANITY, AND UNITARIAN UNIVERSALISM
Recent Comments
0 | Leave a Comment
"At the risk of shameless self-promotion I preached a sermon on Julian of Norwich on ..."
amylynn1022 Julian of Norwich and Love. A ..."
"Yes. Lots of depth there. The Psalms are so crucially important to me. I don't ..."
Roger Butts A Unitarian Universalist Investigation of the ..."
"Think globally.Act locally.There is a lovely book available called Jesus and Buddha. It shows passages ..."
james warren The Art of Peace in a ..."
"We should not idealize or condemn Muir or anyone else. Muir was a man of ..."
Silverwolf13 A Feast for John Muir, Nature ..."
Browse Our Archives
Related posts from Monkey Mind