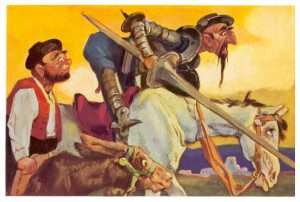 It was on this day in 1605 that El ingenious hidalgo Don Quijote de la Mancha was first published. As one wag summarized the plot, “Guy attacks windmills. Also, he’s mad.”

Miguel de Cervantes claimed the novel was not a novel but a document he stumbled upon largely translated from an Arabic account of Quixote, driven mad by reading stories of chivalry, and who decides to become a knight-errant. He quickly recruits the farmer Sancho Panza as his squire. And off they go.

The novel was an instant success. And it was quickly translated into French, Italian, German, and English. The first of these was Thomas Shelton’s English version of the first part published as The delightful history of the wittie knight, Don Quiskote in 1612. I don’t think the novel has ever been out of print.

(As a small aside Wikipedia recounts among the many English language translations, one by John Milton’s nephew, John Phillips, which some, including the contemporary translator Samuel Putnam, consider the worst English version of all time. A worthy achievement, no doubt.)

(Another aside provided by Wikipedia is that the now well worn phrase “the proof of the pudding is in the eating” was cooked up by another translator Pierre Antoine Motteux, reworking Cervantes’ original “you will see when the eggs are fried.”)

Most lists of the great novels include Don Quixote, and usually high on the lists.

It deserves the accolades.

January 15, 2016
A Word or Two from a Sympathetic Outsider on the Divisions Within the Anglican Communion
Next Post

January 17, 2016 MARTIN'S DREAM & OURS A Liberal Religious Response to the Horrors of Our Times
Recent Comments
0 | Leave a Comment
"This post did not discuss P. Gage. It had some unrelated, brief comments, ending with ..."
cschriner@uuma.org Thinking of Phineas Gage, His Personal ..."
"Wonderful. It is good to be at home!"
Roger Butts Dreaming California
"To James Ford. You asked if there was any other Unitarian organization in the Philippines. ..."
Greg Abreu Recalling the Unitarian Bishop Gregorio Aglipay
"I studied at a UMC seminary. The meeting was indeed sometimes discussed over a glass ..."
Zzyzx Was John Wesley Consecrated an Orthodox ..."
Browse Our Archives
get the latest updates from
Monkey Mind
and the Patheos
Buddhist
Channel
POPULAR AT PATHEOS Buddhist
1