Finding a Secret Cabal of the Heart Gathering at the Wayside Inn in Sudbury January 28, 2016 James Ford 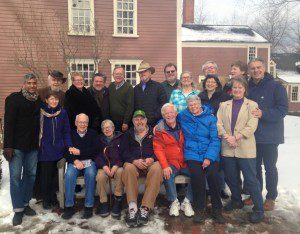 The one hundred and fourteenth gathering of the Fraters of the Wayside Inn has ended. I’ve attended the last dozen, two as a guest, and ten as a frater. And for reasons that have always were unclear, I’ve found it an important moment. This time I think I found out why.

The gathering started as a pre-lenten retreat for local Universalist clergy who gathered at the famed Longfellow’s Wayside Inn in Sudbury, Massachusetts. At the time of the consolidation of the Universalist Church of America with the American Unitarian Association forming the Unitarian Universalist Association, they started admitting Unitarian clergy. Women joined in starting at the beginning of the nineteen eighties.

Membership is limited to the number of beds at the Wayside Inn and it is for life. This has meant twenty people, not many fewer, hardly ever any more, at any given time.

The stated purpose is for spiritual fellowship and to pursue intellectual matters of common concern, mostly as they touch upon the history and practice of Universalism. I’ve joked that given the average age of a more than one hundred year old gathering of people who are members for life, the “real” purpose is to learn who is taking the most medications, and to discuss how things have gone to hell since our day.

Of course there is something more, that more I’ve found elusive, but present.

During the business meeting this time, during a heartfelt and heartful conversation around the next steps of the gathering, and particularly of the difficulties in squaring our aspirations for the furtherance of universalist principles with the realities of how, and I find myself unable to find a better term than “white,” how white we are, with all the limitations on our aspirations this means. Please take “white” as shorthand not only for our almost entirely European descent membership, but also our New England bias, and our generally middle class American orientation. Not a bad thing, but limiting, and given our aspirations, problematic. Looking to survive as something worthwhile for at least another hundred years we have committed to taking some actions to diversify our membership, and to allow us to grow more broadly in spirit and perspective, if not in numbers.

In this conversation one of our members observed how the process of recruiting has been a result of our relational model, leading us when it was time to admit a new member to invite people a few of us already knew. What I found important in this moment was how we were able to acknowledge the importance of that relational, while also noticing it was itself the shadow, creating what I’d call the problem we were then discussing. As I said, I think the fraters are on their, on our way to a path of transformation that will honor the past while also taking us into the future.

But what I really want to hold up here, is what it is at heart that makes it worth the effort, both of the current membership and those who will come in due course. It turns on what relational can be, and what it does mean for our little group.

We’re a small band. And what we have most promised each other is our presence for three days a year for the rest of our lives. People do leave before they die, however not usually for lack of interest, or alignment. I’ve observed for most, only failing health will cause our moving into “inactive” a few years before death. Almost everyone who has accepted the invitation into membership does indeed try to return to that Inn in Sudbury for those three days for a lifetime.

I look at the crowd, all united by being UU clergy who have expressed some interest in Universalism, but not a lot more. Some I love dearly. Others I do not. But all of them, there is with them a relationship that I realize will indeed only end with death or the steps toward death. Without really realizing it I find I have made that commitment in my heart.

This bond is unlike most others in our lives. And while I wouldn’t call it a complete spiritual practice, it is a spiritual practice. I don’t want to go into a digression on what constitutes a spiritual practice in general. In the specific, in this situation, within the fraters we’re called to presence to each other, to being with each other, people we love, and those we don’t, but with whom we’ve pledged to share a Brigadoon like three days each year, until…

This has become something powerful for me.

Surprising, really, given the givens of my life.

But here I find something sometimes irritating. And I mean irritating in the least pleasant sense. And I find something sweet, in a sense I have trouble conveying, but it is tied up with watching people live their lives, having watched an older generation all but pass away, having watched my own crowd move into eldership, watching younger people come in with all the mess of their lives, of, as it turns out our lives.

And all together, something I’m so grateful to have been invited into.

January 27, 2016
Jerusha Howe: Hanging With the Ghost at Longfellow's Wayside Inn
Next Post

January 30, 2016 Gandhi Dies: The Briefest of Meditations
Recent Comments
0 | Leave a Comment
"Thank you."
Khru The Flowing Bridge: Exploring a Zen ..."
"James, thank you for this fresh breeze of truth. On Holy Saturday, all pretense is ..."
Robert Jonas The Zen of Holy Saturday: A ..."
"Thanks for this. Putting Amato and O'Brien in my queue. And so glad you included ..."
Zen Buddhism The Short Course in Zen: Five ..."
"love this James"
Roger Butts The Zen of Holy Saturday: A ..."
Browse Our Archives
get the latest from
Monkey Mind
Sign up for our newsletter
POPULAR AT PATHEOS Buddhist
1

Buddhist
Creating Community: Are you aging? Are you a...
Monkey Mind