A Pagan Feast for Johnny Appleseed, Our American Dionysus 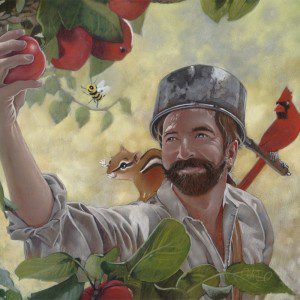 In between those events he became Johnny Appleseed. He was a wandering missionary for the New Church established to further the teachings of the mystic Emanuel Swedenborg. He had an intimate sense of the natural, and particularly attended to the rights of animals in ways reminiscent of St Francis.

But, most of all its apples that we recall. Johnny Appleseed wandered the “west,” planting trees in Illinois, Indiana, Michigan, Western New York, Ohio, and Pennsylvania.

Since Johnny’s death there have been various ways people have marked his life. Early on it appears he was associated with Arbor Day, which makes sense. He is most commonly celebrated on his birthday. But, the March date definitely has its advocates. It is the traditional time to celebrate the life of a “saint,” who goes to the harvest of her or his work on the day of their death. But, also, while the March date is in fact not certain, some prefer it just because it is in the midst of the planting season.

The Wikipedia article on Johnny Appleseed’s life notes how Michael Pollan in his wonderful study the Botany of Desire points out “that since Johnny Appleseed was against grafting, his apples were not of an edible variety and could be used only for cider: ‘Really, what Johnny Appleseed was doing and the reason he was welcome in every cabin in Ohio and Indiana was he was bringing the gift of alcohol to the frontier. He was our American Dionysus.'”

So, we’ve got a pagan feast.

I imagine there are any number of ways to celebrate. Probably a swig of hard apple cider would be most appropriate. But, me, I’m thinking of a slice of apple pie.

In any case, a tip of the hat, if not the glass, to Johnny Appleseed, American Dionysus!

March 10, 2016
Recalling the Dutchman Who Taught America How to Drink Coffee on the Occasion of What Would Have Been his Ninety-sixth Birthday!
Next Post

March 12, 2016 Getting On the Road. Dharma Bum Jack Kerouac is Born
Recent Comments
0 | Leave a Comment
Browse Our Archives
get the latest updates from
Monkey Mind
and the Patheos
Buddhist
Channel
POPULAR AT PATHEOS Buddhist
1