DON’T BE A JERK A Review of Brad Warner’s Paraphrase & Commentary of Eihei Dogen May 26, 2016 James Ford 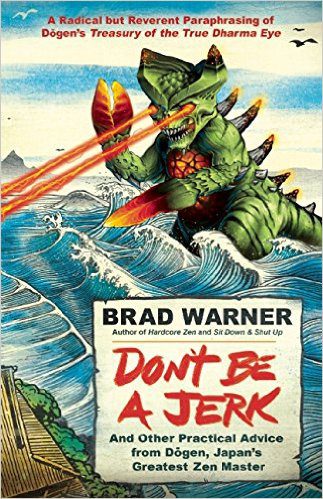 DON’T BE A JERKAnd Other Practical Advice from Dogen, Japan’s Greatest Zen Master

Don’t Be a Jerk has been sitting at my bedside for a couple of months, and I’ve finally gotten around to reading it.

This was no surprise. It’s a good book.

Now, I’ve written about Brad Warner before. He traveled to Japan to work for the firm that made Godzilla movies, but once there found the independent Soto Zen teacher Gudo Wafu Nishijima. Nishijima Roshi was himself heavily influenced by his first teacher Kodo Sawaki, sometimes better known as Homeless Kodo. Kodo Roshi was a leading figure in the “back to Dogen” movement.” This reform of the Soto school put a strong emphasis on zazen, seated Zen meditation, pretty much to the exclusion of all else. Which is why it sometimes is called “zazen without toys.”

As a teacher Nishijima Roshi followed his own lights and avoided the Soto school. Along the way he authorized a number of people as priests within his organization, the Dogen Sangha. Brad is without a doubt the shining star of the Roshi’s heirs.

With Don’t Be a Jerk we get a sense through Brad of Gudo Nishijima’s life-work as a student of the great Soto Zen founder Eihei Dogen. And, at the same time it is Brad’s work, very, very much. It has his tone, on the brash side, with the occasional provocative throw-away line. But it, at the same time, as my old friend and colleague, the Zen teacher and Dogen (I know he’ll hate the word) scholar Dosho Port, notes, is infused with Brad’s underlying “diligence, integrity, and caution.”

As to Dogen I admit sometimes I find the adulation given the old boy by the Soto crowd borders on idolatrous. As Brad notes, Dogen “tends to be presented either as an inscrutable Oriental speaking in riddles and rhymes or as an insufferable intellectual making clever allusions to books you’re too dumb to have heard of.”

But, there’s a reason for all the awe and the annoying fawning that comes with it. Dogen is brilliant, and sees deep and true, and can genuinely be called one of the towering figures of world spirituality. Well worth reading. And mulling over. And, with a little luck, inspiring the reader to go to the pillow and look for herself. And then with Dogen as a guide, perhaps even to resolve the great questions of life and death.

Brad launched into the public as a Punk interpreter of Zen. That presentation was full throated, brash, his style in your face, full of passing invective. As the years have passed the edge has worn a bit. There was always substance, but here we get to see it a bit clearer. Ironically, considering the chutzpah it takes to feel one can accurately paraphrase someone, especially someone like Dogen, in this book the humility that Zen invites has obviously also become a part of Brad’s style.

Near the end he tells us “I’ve gone through a lot of phases of understanding what Zen is. I’ve changed my mind a number of times. I’ve often even assumed that I was completely wrong about what Zen is, and that I only understood what it meant to me. In fact, sometimes I wasn’t sure I even understood what it meant to me! I just did it. Lately I’ve come to the tentative conclusion that what Zen means to me and what Zen actually is may not be two different things.”

As another person who has walked this way for many years, and who has experienced that dance of the personal and some larger understanding, although with some different emphasis in practice, I have come to some different conclusions than Brad has. Hopefully held as lightly as I believe he is holding his conclusions, even as these differences extend to the shortest definitions of what it is we’re about as Zen practitioners. But, I also believe we, all of us who have thrown our hearts and bodies into this way, and have sincerely tried to learn, are touching something common, something real, something of enormous value. I believe in this book Brad is presenting his whole heart, and it is an authentic vision of Zen’s way, and of Dogen’s teaching.

Brad’s first book Hardcore Zen was the gateway for many people to Zen.

I can easily see Don’t Be a Jerk become many people’s introduction to Dogen.

And. This is a very good introduction to Dogen. Of course it does have Brad’s fingerprint’s all over it. And, if latent, I’m sure we can find Nishijima’s, as well. A straight-ahead translation is subject to shifting, a paraphrase is even more so. I can imagine some of my friends of a more scholarly turn than I digging into some serious arguments with Brad’s interpretation of this or that passage. I hope as you read, you will argue, too.

It is wise to hold this book lightly and seriously at the same time, knowing we’re looking through a glass darkly, but there is something to see. Then the lessons can be life changing.

Steal it. (Okay, don’t steal it. Buy it new so Brad gets his royalties. Writing does not pay very well. I can testify to that…)

If Dogen is new to you, welcome to something amazing. If Dogen is an old friend, you may discover some new facets, some challenges, even new possibilities.

May 25, 2016
When Worlds Collide: A Meditation on Religion and After Religion as we Know It
Next Post

May 27, 2016 Happy Birthday, Vincent Price! And, at No Extra Charge: He Reads Poe's the Raven
Recent Comments
0 | Leave a Comment
Browse Our Archives
get the latest from
Monkey Mind
Sign up for our newsletter
POPULAR AT PATHEOS Buddhist
1