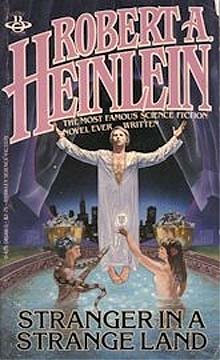 Actually this is quite the day in the great calendar. Among many other things it is World (or, International) Chocolate Day, as well as, as pretty much any flying saucer enthusiast can tell you the day in 1947 when a flying saucer crashed near Roswell, New Mexico. ‘Tis also in 1954 the day Elvis Presley was first heard on radio, when his freshly minted “That’s All Right” debuted on WHBQ in Memphis.

Some ugly things happened on this day, as well.

But, I have to go with the fact it is Robert Heinlein‘s birthday. He was born on this day in 1907, in Butler, MO. As an adolescent Heinlein was probably my favorite writer. At least he shared the pantheon for me with Arthur C Clarke & Issac Asimov. His books, starting with his juvenile novels which I devoured, and then particularly Stranger in a Strange Land, were quite important for me.

Heinlein was a complicated character. Still, whatever else might be said of him, he certainly always was interesting. Ted Gioia cited in Wikipedia observed how Heinlein has “been accused of many things—of being a libertine or a libertarian, a fascist or a fetishist, pre-Oedipal or just plain preposterous. Heinlein’s critics cut across all ends of the political spectrum, as do his fans. His admirers have ranged from Madalyn Murray O’Hair, the founder of American Atheists, to members of the Church of All Worlds, who hail Heinlein as a prophet. Apparently both true believers and non-believers, and perhaps some agnostics, have found sustenance in Heinlein’s prodigious output.”

What could a teenaged boy looking out from a particularly constrained life hope for more than someone who said sex was okay, racism was wrong, and that above all the individual should be completely autonomous? For a couple of years he was a prophet pointing to something for me. Not quite sure how in any sort of detailed or specific way, but it felt important.

As an adult I would say that last part of his message about the absolute autonomy of the individual misses some serious complications with the real world, where the reality is we must deal with the messy twin truths that the individual is totally unique, never to be repeated, and we are totally woven out of each other and the world, which brings with it some heavy responsibilities that extend out well beyond our skins…

But, for today, just a small thank you to someone who was important to me at a difficult phase in my life, and who offered perspectives that I would continue to say were more healthful than not.

July 6, 2016
Wishing a Happy Eighty-First Birthday to His Holiness the 14th Dalai Lama
Next Post

July 7, 2016 On Not Knowing as a Subversive Act
Recent Comments
0 | Leave a Comment
"James, thank you for this fresh breeze of truth. On Holy Saturday, all pretense is ..."
Robert Jonas The Zen of Holy Saturday: A ..."
"Thanks for this. Putting Amato and O'Brien in my queue. And so glad you included ..."
Zen Buddhism The Short Course in Zen: Five ..."
"love this James"
Roger Butts The Zen of Holy Saturday: A ..."
"The Ten Ox-Herding Pictures are fascinating and have everything in them that anyone needs to ..."
Jay The Fat Man and the Ox
Browse Our Archives
get the latest from
Monkey Mind
Sign up for our newsletter
POPULAR AT PATHEOS Buddhist
1