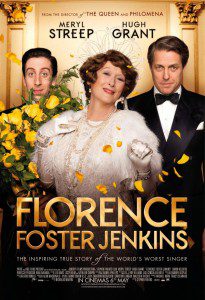 After Florence Foster Jenkins ended, Jan and I left and both paused at the restrooms. When she exited, Jan said, “The word from the women’s room is that the film is great. And that Simon Helberg stole the show.”

Peter Howell at the Toronto Star has a more mundane appreciation, “Enjoyable summer entertainment for grown-ups…” Me, I think it should be placed somewhere between enjoyable summer entertainment and great. It certainly is something more than our typical Hollywood fare. And, there is no part of the producing or making of the film that isn’t right on the money. And. Complicated. I’d say perfect in all its imperfections.

Florence Foster Jenkins is actually only the latest installment in what has become a minor franchise exploring the life of Ms Jenkins, arguably the worst singer ever, at least the worst singer ever to stand on a stage. There have been to date two plays, a musical, and a film before this new entry.

David Edelstein at the New York Magazine tells us “It’s wobbly, uneven, ultimately wonderful film – its unevenness befitting its title character, who we come to love despite her loopy lack of awareness of her own deficiencies.” It gives us a loving comment on our apparently infinite human capacity for self-deception. If, maybe, just a bit more forgiving than usually happens in life. On the other hand I don’t particularly need my nose rubbed into the unpleasantnesses of life, the ugly consequences of our missteps and particularly our actions based in our delusions about ourselves are a little too available in ordinary life, thank you. So, perhaps the movie has one dollop too much of sentimentality. But no more than a single dollop too much…

For those who want a bit more of a reality check they can read up on the real Florence Jenkins, upon whose life the story is based. It’s sadder than the movie. Not that there isn’t enough sadness in the film, just placed a heart beat to the rear of the action. Which worked for me.

The script is by Nicholas Martin (who is embroiled in an ugly dispute with his ex-partner about the extent to which she was in fact a co-author), and based closely enough on the real-life Florence Foster Jenkins. It is directed by Stephen Frears, who Rotten Tomatoes tells us is “known for making provocative, stylized, and tightly budgeted films about people living on society’s social and/or sexual fringes.” So, this film is right in his wheel house.

The cast is breath taking. The secondary characters breathe and live and are a delight. In this regard I have to throw in a particular shout out for Nina Arianda’s brassy Agnes Stark. As to the principals. Meryl Streep, who may well be the best actor of our times, plays Florence. Peter Travers at Rolling Stone suggests this role may win her her twentieth Oscar nomination. I certainly hope so. Hugh Grant has a juicy part as a failed actor turned her (as we know from real life, not the script) common-law husband, protector, and enabler. In some ways the ongoing question of whether he is exploiting her or genuinely loves her, or, how both can be occupy the same space is perhaps the heart of the movie. But, as I mentioned at the top, Simon Helberg (yes, Howard from Big Bang Theory) goes a long way toward stealing the show. Thinking we’re talking about Meryl Streep and Hugh Grant, that’s saying something.

The scene when Helberg, playing pianist Cosme McMoon, first hears Streep’s Florence sing is probably destined to become one of those clips immortalized, playing to the ages on Youtube and its successor platforms, in filmographies, and in acting classes. Actually an amazingly large part of the movie plays out as close ups of these characters. Acting as face muscles play under the skin responding to the comedy of life. Something wonderful.

For me, bottom line this is a delicious movie.

And, yet, pitch perfect.

It brings us something more than an entertaining one hundred and ten summer evening minutes.

In case it isn’t obvious yet, I recommend it.

August 16, 2016 THIRTY-THREE BOOKS ON ZEN & BUDDHISM
Recent Comments
0 | Leave a Comment
"Think globally.Act locally.There is a lovely book available called Jesus and Buddha. It shows passages ..."
james warren The Art of Peace in a ..."
"We should not idealize or condemn Muir or anyone else. Muir was a man of ..."
Silverwolf13 A Feast for John Muir, Nature ..."
"The only great work of art ever made by a committee...There is a wonderful appreciation ..."
Nicholas Patterson King James’ Bible is Born
"Thanks for this, James."
mfidelman The Buddhist Temple of Toledo & ..."
Browse Our Archives
Related posts from Monkey Mind