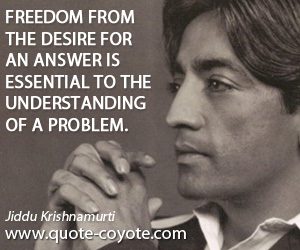 It was on this day in 1929 that that Jiddu Krishnamurti, who had been discovered and then groomed to be the next World Teacher by Theosophists Charles Leadbetter and Annie Besant, was scheduled to give a lecture to the Order of the Star of the East, the organization set up to support his work. Some three thousand ardent followers were present, as were his mentors.

He rather quickly got to the point. “I maintain that Truth is a pathless land, and you cannot approach it by any path whatsoever, by any religion, by any sect. That is my point of view, and I adhere to that absolutely and unconditionally. Truth, being limitless, unconditioned, unapproachable by any path whatsoever, cannot be organized; nor should any organization be formed to lead or to coerce people along any particular path.”

And with that he dissolved the organization.

For me it is fascinating that for years Bishop Leadbetter and Mrs Besant and other Theosophical leaders were saying that when the new world teacher came, he would say things that people could not accept. And, sure enough, when Krishnamurti came into his own he said words they could not accept.

Institutionally they didn’t have much say. He was in charge. He was, after all, the world teacher.

Soon after Krishnamurti severed all ties with Theosophy and embarked upon his remarkable career as a lecturer and commentator on matters of the spirit.

I am a qualified fan of Krishnamurti. I do not agree with all he said over his teaching life. But, I think he had a genuine eye, as we Zen people like to say, and offered wise counsel that helped many people.

So, thanks to Bishop Leadbetter and Mr Besant for noticing the boy all those years ago, and investing in bringing him to adulthood. And, most of all, to Kirshnamurti himself, for being able to step away from the cult before it hardened his heart. Something rare, I believe. And, then, of course, and then going on to speak to the great matters in ways that people could and continue to be able to hear.

August 2, 2016
Star Trek Beyond: The Franchise Reboot Continues Where A Fair Number Have Gone Before, But It's Still Fun
Next Post

August 4, 2016 Break Out the Champagne
Recent Comments
0 | Leave a Comment
Browse Our Archives
get the latest updates from
Monkey Mind
and the Patheos
Buddhist
Channel
POPULAR AT PATHEOS Buddhist
1