Thinking of Books That Helped Me on My Spiritual Path

Thinking of Books That Helped Me on My Spiritual Path August 31, 2016 James Ford 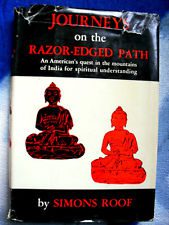 I would like to hold up for your consideration a small out of print book. Think of it as an invitation to hang out in used bookstores. While there look around for Simons Roof’s Journeys on the Razor-edged Path.

In 1955 Roofs quit his job, packed up his family, and spent the next two years in India. Journeys was the result of that adventure. I read it somewhere in my late adolescence at the very beginning of my spiritual quest, well before my finding Zen. On reflection, I suspect it, even more than the writings of Christopher Isherwood, Aldous Huxley, Gearld Heard and that gang, played a central part in turning my eye Eastward and particularly to the work of Sri Ramakrishna and from there to his disciples.

Whatever, that little book provided a turning point for me. One passage that particularly caught my imagination at the time and never fully passed from my consciousness (although on re-reading I notice I did conflate some of it) was this:

A robber was surprised one moonlight night (an old Hindu tale begins) while attempting to break into a village headman’s house. But being a quick-witted fellow he noticed, as he ran outside, a large pile of ashes beside a distant pond. Swiftly stripping to his loincloth, he plunged into the water, burying his clothes in the mud, then sprang out and rolled over in the ashes.

By the time the headman had waked the other villagers and the search was on, the robber had run to the edge of the main road and seated himself in meditation posture under a holy peepul tree.

Lat in the course of the hunt, as several villagers approached the tree, one suddenly cried out, ‘See – a holy man! Surely he can tell us where the robber is!’ ‘No, no!’ another villager hastily cautioned. ‘Can’t you see he’s in samadhi? It would be evil to disturb him. We must wait.’ Gradually, as the search cooled, still more villagers joined those who were waiting, until at last the whole village was assembled.

And now the robber, feeling he could no longer delay, dared the slightest peep. He was astonished to see how patiently, how reverently, the villagers waited for his counsel. More confidently, he sighed deeply in a manner that he desperately hoped would suggest his reluctance to return to the mundane world from more blissful regions. He slowly opened his eyes wide, and a shiver of anticipation thrilled through the crowd. For a full five minutes he gazed in apparent abstraction at a spot over and behind their heads. Then, lowering his gaze and seeming to notice them for the first time, he addressed the villagers in a low voice that was a gracious and solemn as he could make it: ‘Why do you search for a poor robber, my children? Better by far you should search for God!’”

The story continues how this encounter struck the hearts of the villagers and so taken with his counsel, they made him their teacher. Captive, as he was, gradually, his own heart turned, and he became wise.

This was a new way to think about spirituality. And, I just loved, loved that a thief could trap himself into becoming a saint.

I don’t know, perhaps the lesson for me, was that even I, if I took on the practice with no better motive than a thief looking for a hiding place could achieve wisdom.

August 30, 2016
The Zen of Attitude Adjustment, Or, Let the Sweet Two by Four of Life Draw You Into the Moment
Next Post

September 1, 2016 Martha Dies, And With Her a Species Passes from the Earth
Recent Comments
0 | Leave a Comment
Browse Our Archives
get the latest from
Monkey Mind
Sign up for our newsletter
POPULAR AT PATHEOS Buddhist
1