Denial: A Talky Movie About Important Things: I loved It

Denial: A Talky Movie About Important Things: I loved It October 24, 2016 James Ford 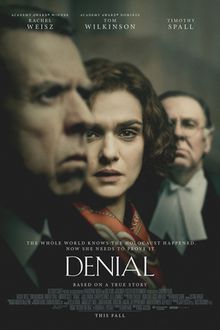 Yesterday Jan and I went to see Denial.

The story follows the real life events of British writer and independent scholar David Irving’s suit for libel in the mid 1990s against the American academic Deborah Lipstadt’s characterization of him as a Holocaust denier. It is largely a courtroom drama, where most of the action turns on the fact that the burden of proof in English libel law rests with the defense.

The script is by the playwright David Hare working from Professor Lipstadt’s memoir of the events, History on Trial: My Day in Court with a Holocaust Denier. The film was directed by Mick Jackson. Script and directing is spare and drives the various threads of the story relentlessly forward. The players are all absolutely brilliant in their characterizations, led by Rachel Weisz’s driven and not always nice Professor Lipstadt, and a tour de force presentation with Timothy Spall’s David Irving.

But it is a courtroom drama. And, I found the English legal team led by solicitor Anthony Julius played by Andrew Scott and barrister Richard Rampton played by Tom Wilkinson, much of the heart of the movie. They constantly stripped away the potential abuse that Irving could put survivors of the Holocaust to despite their burning desire to be heard, as well as sitting on the professor’s deep desire to directly confront what she correctly saw as a deep evil. Skillfully avoiding all these genuine pressing issues not directly relevant, all in order to drive relentlessly toward the real goal, a finding that she had not libeled him by calling the writer a Holocaust denier. Their actions themselves raising questions about questions.

They say it is more fun to play the villain, and my, one can see why – even as the anti-semitic, racist, history mal-shaper Irving is a manifestation of a deeply dangerous perspective in our times. Robert Horton of the Seattle Weekly puts his finger on the even deeper and profoundly troubling issue of our day, “corrupted public discourse, in our time, (where) history has become a bunch of opinions – because we all have our interpretations, right? – and expertise is denigrated.” Here in this movie we get what that can look like when the rubber hits the road.

The Rotten Tomatoes aggregation of eighty-two professional reviews gave it a seventy-eight percent positive score. The same score the just under three thousand regular viewers gave it. So, not universally acclaimed. But, not surprising to me, either.

Basically, the film puts radical relativism on trial. Not everyone’s cup of tea. Particularly if you think the world is completely up for grabs. Or, for that matter, if you think good automatically wins, the truth will out. It seems many if not most of the reviews that did not like the film, felt it lacked emotional depth, particularly based, I felt, in that sense things may not be completely relative, but nonetheless are messy. Stephen Holden at the New York times said, its “lack of emotional catharsis” left a “frustrating emptiness at its center.” I hear that. But. Me, I found the movie subtle, and, complex, and a simple uncomplicated win for the defense would not, could not be true.

For a film about ideas, I found it remarkably engaging. Small hints of menace lurk in the background, the professor warned to change up her jogging route, crowds yelling epithets and pushing dangerously close, and an egg, presumably rotten, sailing through the air to hit one of the figures trying to get into the court. The film gets out of the courtroom enough to avoid stultification. I was particularly moved by the visit to Auschwitz. And with that questions like is that place a shrine or a crime scene? Or?

Certainly ideas were the most challenging part of the film. Is everything relative? Is history really just fiction written by the winners? Can you prevail by directly assaulting a liar? How many different issues may be bundled up together before confusion and distraction take over?

An amazing small and powerful film.

I strongly recommend it.

October 25, 2016 A Brief Meditation on that Photograph of Susan B Anthony's Gravestone
Recent Comments
0 | Leave a Comment
"I love this reflection on TS Eliott."
Roger Butts | James Ford
"Well, I am a Catholic with a Zen practice (former student of Joko Beck's), and ..."
a panicky pilgrim A Feast for Our Lady of ..."
"do you see UU as aligning with a tradition to take seriously?"
Brian McInerney The Zen priest considers Tradition and ..."
"Very moving and thoughtful, and it helps me make sense of your Anglican longings, and ..."
a panicky pilgrim Requiem for my Father
Browse Our Archives
get the latest updates from
Monkey Mind
and the Patheos
Buddhist
Channel
POPULAR AT PATHEOS Buddhist
1