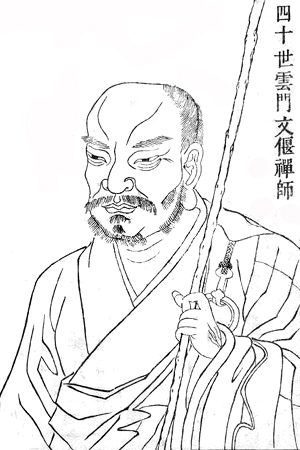 And. And in that moment when his foot broke Yunmen saw into the fundamental matter. He would carry the mark of this encounter for the rest of life as a severe limp.

As I said Yunmen would become one of the great teachers of his time, with more than sixty Dharma successors. His line would eventually become one of the tributaries of the Linji line, the Rinzai school in Japan.

As a teacher he was often just as direct as Bokushu. And often to great effect.

For instance that dried shit stick is a response to one of the great setups of the Zen koan tradition. In the Gateless Gate that question “Who or what is Buddha?” is asked and answered, if I recall correctly, four times. One of these is “three pounds of flax,” while another is “this very mind is Buddha.”

The one response may seem a complete non sequitur, while the other feels too philosophical for a Zen koan answer. And, this one, particularly for anyone used to reading spiritual literature can be unsettling. The scatological response is so unspiritual. At least outside Zen circles. Actually I’ve seen Zen teachers play up that unsettling with considerable gusto. I recall once attending a talk given by the Korean Zen master Seung Sahn, who addressed this koan. His accent was heavy, and in order to make sure his audience understood what he was saying, and I found it hard not to miss the possibility of playing it up, he leaned slightly to one side and pointed toward his bottom, saying “shit, shit…” As I recall over the many years between that moment and as I write this, he smiled slightly as he pointed and repeated “shit.” A small smile, almost a smirk.

I’ve seen some commentators assert that the shit stick has no intrinsic meaning. The intent is, in fact, to shock. I don’t really think so. The playing it up, the leaning over and pointing at one’s butt, is playfully drawing us toward something. And it is not to meaninglessness. Nor is it iconoclasm, a deliberate mocking of spiritual conventions. No more so than three pounds of flax, and no less so than this very mind is Buddha. The point lies elsewhere.

In some ways this response is a bit like Mu. A brief word or phrase where the meaning of that word has been vacated, and the sound, the noise itself is the presentation. It is also an invitation. A principle of koan engagement is assuming a direct pointing, and with that an invitation into intimacy. And, often, that pointing and that invitation comes from what seems to be left field.

Sekida Katsuki, one of Robert Atiken’s teachers says of this case, “The student asks seriously, ‘What is Buddha?’ Perhaps he is imagining the glorious image of the Buddha pervading the whole universe. The answer comes like a blow to smash such a thing. This kind of answer is called ‘breaking the thinking stream of consciousness.’” Whether there’s an attachment to the pure, Yunmen was famous for meeting people where they were. And, I find this precisely that, fixing the lid to the box.

In that spirit of matching box and lid, Writer Toni Bernhard connects a poem by Robert Aitken, written when he was a prisoner in a Japanese internment camp during the Second World War, to Sensei Sekida’s comment.

All of it, all of our lives are the stuff of our awakening. Even the shit. All the different kinds of shit. Our brokenness, our failures, our addictions.

November 7, 2016 What do you mean Joni Mitchell is Seventy-Two?
Recent Comments
0 | Leave a Comment
"A wonderful tribute indeed, but you fail to speak about his great lit-crit and also ..."
Tom Hanson T. S. Eliot & His Secret ..."
"Thank you for this wonderful tribute to Eliot. "The Wasteland and Other Poems" was one ..."
Steve Bailey T. S. Eliot & His Secret ..."
"Father Merton wrote "Nhat Hanh Is My Brother" in 1966."He is more my brother than ..."
Robert Flannery The Zen priest Wishes Thomas Merton ..."
"this geelong seafood blog is great. geelong seafood"
John N LIVING IN THIS FLOATING WORLD: A ..."
Browse Our Archives
get the latest from
Monkey Mind
Sign up for our newsletter
POPULAR AT PATHEOS Buddhist
1