The World Honored One Sees the Morning Star, And the World Awakens

The World Honored One Sees the Morning Star, And the World Awakens December 8, 2016 James Ford 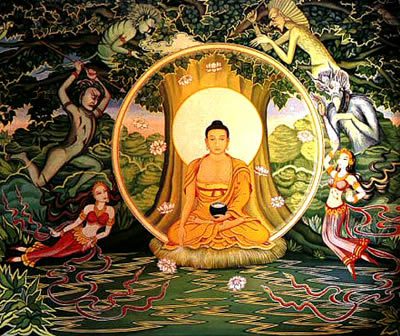 I so love telling the story.

And, so, once again…

Gautama Siddhartha lived somewhere between the sixth and fourth centuries before the common era near what today is the border between India and Nepal. He had some experiences, and he taught, he preached sermons that were memorized and no doubt polished by those who transmitted them, and then polished some more. Finally, some four hundred or so years after these words were spoken, they started being written down, principally in two languages, Pali and Sanskrit. Neither was the language he spoke in his lifetime.

So, what do we know looking through that glass darkly? Well, in the telling he’s a prince. Gautama Siddhartha was born to be a king. There are prophecies about his birth that cause his father the king to be hopeful and concerned. He is told by the sages that this boy would either be a great king, maybe the greatest in history, or he would be a sage, maybe the savior of the world.

His father thought king was the better option. And he came up with a strategy for assuring the boy would be a king. He decided to keep him from seeing any of the calamities of life, anything that might spark the great urge to begin a spiritual quest. And for a time it worked.

In time he grew up. He married. They had a son. But, he also found himself thinking about that world beyond the walls of his palace. His every desire was being met, except this one, to know what lay beyond the walls. Finally, one day, he found a way. Taking a servant as a companion he slipped out to take a walk. In some tellings, there are four walk abouts, in some one. Each time he had an encounter that shocked his sensibilities.

The first encounter that was so strange he couldn’t quite see it in focus, and so he had to ask his companion what they were witnessing. He was told that what they saw was a sick person, a very sick person. He had never before witnessed such a thing. His companion told him at some point everyone becomes sick. Even he would. It shocked him beyond words.

The second encounter was equally bizarre. Again he couldn’t understand what was in front of them, and had to be told. This time it was someone deeply aged. And he was horrified when he was told everyone, even he, ages.The third encounter was with a corpse lying in the street.This terrified him, and even more when he pushed his companion and learned, this too, was his fate, as it was for everyone who ever lived.

Then there was that fourth encounter. This time they saw a sage sitting in meditation, apparently untouched by the hurt and squalor all around them. Then and there he determined to leave home and to follow the way of the sages, and to find that peace which he thought he saw in the meditator.

In modernity many people have picked up the detail about his leaving wife and son, abandoning his family. And those details are important. Our actions have consequences, and his, well, there were many that followed in the wake of his decision.

He abandoned his wealth, took off the finery he had worn all his life, and put on the rags of a mendicant, and with that embarked upon a journey. He visited all the great teachers of his day, learned their disciplines, and in this story each time his teacher, his guru would declare he learned all the guru had to teach, and was offered a place as co-teacher. Each time, feeling he had not in fact penetrated to the fundamental matter, he declines, and continued his quest.

Along the way the stakes grow. He learns the teachings of the proto-Hinduism of his time and place. And he believes the suffering he is experiencing actually extends over time immemorial, through endless cycles of birth and death. He is sick of it. He is sick of it all, and what he wants is a way to put an end to the hurt once and for all.

Eventually he takes up the ways of extreme privation, denying any comfort at all right to the point of starving himself. And by this time he has attracted five companions, all at their wits end, trying to find a way to genuine peace through the most extreme disciplines.

And once again, he sees it isn’t enough. And he accepts an offering of rice gruel from a young girl. Disgusted his companions abandon him.

But then it happened. As the morning star arose he glanced up. And he understood.
In the Dhammapada, an anthology of his sayings, he is said to have declared, “House-builder, you’re seen through! You will never again build another house. Your rafters are broken, the ridgepole knocked down. All has returned to the unformed, the mind has come to an end of craving.”

“How wonderful! How wonderful! I, and all beings, have awakened together.”
Master Eihei Dogen the thirteenth century Zen theologian says the words are, “When the morning star appeared, I and the sentient beings of earth simultaneously attained enlightenment.”

Commenting on this, the Vietnamese Zen master Thich Thien An explains, “When we attain the actualization of the Supreme Way, we come to realize that all things are perfect just as they are.”

In the traditional tellings, Gautama decides he needs to find his companions and tell them the good news he discovered. As he gets up and begins to walk down the road he is met by a sage, who knows there is something special in this person. And so he asks, “Are you a god?” Gautama says “No.” “Are you an angel?” “No.” So, he says, “I know there’s something going on. What are you?”

Gautama Siddhartha says, “I am awake.”

And you and I awake together.

All beings. One body.

December 7, 2016
The Road is All: Remembering Willa Cather
Next Post

December 9, 2016 thinking of our mother...
Recent Comments
0 | Leave a Comment
Browse Our Archives
get the latest from
Monkey Mind
Sign up for our newsletter
POPULAR AT PATHEOS Buddhist
1