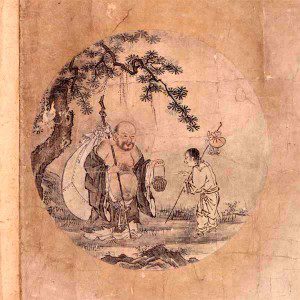 Turning and turning in the widening gyre
The falcon cannot hear the falconer;
Things fall apart; the centre cannot hold;
Mere anarchy is loosed upon the world,

The blood-dimmed tide is loosed, and everywhere
The ceremony of innocence is drowned;
The best lack all conviction, while the worst
Are full of passionate intensity.

Surely some revelation is at hand;
Surely the Second Coming is at hand.
The Second Coming! Hardly are those words out
When a vast image out of Spiritus Mundi
Troubles my sight: a waste of desert sand;
A shape with lion body and the head of a man,
A gaze blank and pitiless as the sun,
Is moving its slow thighs, while all about it
Wind shadows of the indignant desert birds.

The darkness drops again but now I know
That twenty centuries of stony sleep
Were vexed to nightmare by a rocking cradle,
And what rough beast, its hour come round at last,
Slouches towards Bethlehem to be born?

It does not begin with a lot of promise. A real estate developer and reality television star running on a platform reeking of fear of others real and perceived with a heavy emphasis on perceived is about to be installed as president of the United States. Global climate change is well under way, and not far beneath the sadnesses of the Middle East we can see the contours of looming mass migrations. And, of course, as of this moment its a pretty good guess the world’s population is rapidly approaching seven and a half billion people.

War and rumors of war sing their little off key melody, the muzak of human existence continues. And of course. Of course. The rich continue getting richer. And the poor, well, fuck them is the order of the day.

So, what to do? From my perspective the promises of the right are all lies. Theocracy? No thank you. Libertarianism? Adam Smith channeled through Ayn Rand, an idol setting up the human ego as a god gives us what? In the name of individual freedom the strong seize power and trample the weak. And, well, the left is hardly much better, caught up in the half baked schemes of various nineteenth century philosophers. The blandishments of the farther left of our American scene seem to mirror the lie of libertarianism. Except its idol is the collective. But, frankly, it is just as false as the cult of the individual, and in practice quickly becomes the rhetorical beard for more concentrated power, and more trampling of the weak, although their faces might change just a little.

Yeats famous line haunts me. “The worst are full of passionate intensity.” And, my goodness, they are all around. My natural alliance is with the left. At least they claim, or more fairly, think they’re on the side of people. But, their certainties and foibles are very hard to take. And right now as everyone is trying to assess blame for the catastrophe that is Mr Trump’s election, I find myself pretty disgusted with my crowd. Untroubled by actually engaging the real world they are caught up seeking out heretics to burn, getting ever more pure with their commitments to, well, their favorite idols.

Left with just this I find it hard not to despair. Fortunately, that’s not the end all of it all. Howard Zinn claims “you can’t be neutral on a moving train.” While what that is supposed to mean isn’t in fact clear from trying to diagram the sentence, I get it as short hand for an assertion that there is no other place we can be than right here in the mess.

And, that I find an important thing to notice. And a hint at what a Buddhist might bring to this mess. But, then, which Buddhism? There are versions that call  us to turn from the stink of the world, to not care, to disengage, and with that to find our liberation. Others proclaim in that turning away it is in fact saving everyone. And, while each of these versions have something about them, neither represents what I’ve found.

My Buddhism, or more specifically my Zen Buddhism is placed firmly in our time and place. The Zen Buddhism that I practice manifests within the modern, leaning into post-modern, and probably beginning to shape up in whatever follows post-modern – it exists in the world observed through the scientific project. Critically it rejects a world in which the concentrated consequences of my intentions and actions creates specific individuals in a chain of suffering until the cognitive error of a separate self is overcome. The Buddhism I follow is still very much informed by that ancient insight into the idea of a separate self as a cognitive error, but locates the individual, that is you and me, ever more tightly within the great play of causality, and where the consequences of intentions and actions have immediate consequence for the temporary self, and in varying degrees, plays out into the larger web.

Otherwise my Zen Buddhism is pretty consistent with what has emerged as a path of liberation in the past thousand plus years – focused on a three-fold perspective: insight into a profound nonduality, practices of intimacy, and the cultivation a moral/ethical container. Although maybe there’s been a bit of a reshuffling of emphasis here and there.

I continue to explore and to share with others what I find within that exploration of the nondual. I feel particularly enriched by our time and place where not only do we have the collective wisdom of the Zen and Buddhist traditions, but may draw upon other mystical religious experiences, and, critically to place it against the observations of science and ever more sophisticated psychological models. As humans our vision is always clouded, but even through a glass darkly, we are able to see this, to know this. And it is the compass and the north star. It says we are connected more deeply than  our lungs and breathing.

And. I continue to practice and to teach the disciplines of intimacy, particularly shikantaza and koan introspection as gifts of immeasurable power. The great tools of a spiritual technology that remains an amazing gift for us all. Although, while not despising the monastery, finding how it can be brought into the market place, exploring the ways it can be everyone’s discipline rather than just belonging to a handful of professionals.

And, what I think we Zen Buddhists might particularly bring to the table as we struggle with direction in the future is our moral/ethical container. This may prove to be of critical importance as we go forward, a corrective to Adam Smith and Karl Marx, a path that can take what is valuable from each, but which holds another view of who and what we are as our north star.

What our contemporary political philosophies lack, in my view, is a realistic anthropology, and, with that, a moral perspective that gives us a genuinely healthful direction. So, as I see it what our modernist, or naturalist, a right term hasn’t yet emerged or at least hasn’t yet gained common currency, so right now I’m going with naturalist Buddhist perspective offers a sense of the human as the result of causes and conditions, precious in the moment, but passing, and always contextualized within the world like a near infinite collection of Russian dolls.

Practically, we humans intuit this and it rises in us as a sense of fairness, of balance, of harmony. The catch is that we also have an inbuilt sense for survival, and it manifests as often as not as an inclination to cheat. So, there we are. One image that can work if you don’t hold it too tightly is half angel, half demon. Another way is we, each of us, and in our collective are a bundle of potentiality.

I find this path demands both reflection and engagement. I cannot do in alone. Nor, can anyone else. We are all in this mess together. That is my naturalistic Zen Buddhism in a nutshell.

Then there’s Mr Yeats’ song. After the observation about the good equivocating whilst the bad, well, they’ve got their certainties, and a lot of power comes with that. But. And. Also. This.

The darkness drops again but now I know
That twenty centuries of stony sleep
Were vexed to nightmare by a rocking cradle,
And what rough beast, its hour come round at last,
Slouches towards Bethlehem to be born?

Yeats sang out of a somewhat different story than this naturalistic Buddhism. But, maybe in fact its not all that different. It is after all the story of a baby, of the most ordinary of all things, becoming through attention and love, something quite special. And the question remains. What rough beast slouches toward Bethlehem at this hour?

What will birth this year?

This is what I find. This is my resolution, if you will. I commit to continue to cultivate my own heart and mind. And, at the very same time I cannot ignore my sisters and brothers, indeed, this whole blessed, broken planet. So, it is one thing. My calling is to engage as best I can. To speak the truth as accurately as I can, while constantly striving to be more accurate, more clear.

It may be a rough beast that births. But, it has a certain ungainly charm about it, as well. And, maybe it even contains our saving.

I need to throw myself on the pillow with regularity, to pay deep attention, and to get off the pillow regularly and to join with others, ideally others who do not agree with me in every detail, and to struggle together with the great vow of saving the many beings. What’s that old line? Think globally, act locally. Never more true, I suspect than at this moment.

In each action. With every word. Presence, and striving to see the family, and to act like everything is a relative.

I hope you will make a similar promise. A lot appears to be hanging on it…

January 4, 2017 Enter the Fabian Society: A Small Meditation About What Democratic Socialism Actually Means
Recent Comments
0 | Leave a Comment
"everything Jesus has to say about being a true believer of the true way is ..."
Isa Kocher HONEST TO JESUS: The Zen minister ..."
"My translation at http://home.pon.net/wildros...and here https://terebess.hu/english...Terebess has 26 translations at https://terebess.hu/zen/tex..."
Gregory Wonderwheel Faith in Mind, the Xinxinming, a ..."
"Happy birthday in advance, thanks for this thoughtful article and the ones to follow it."
Oliver Oehm Sun Faced Buddha, Moon Faced Buddha: ..."
"Thanks, James. While not specifically Zen, a sangha member alerted me to the book A ..."
Julie A. Nelson Holders of Lineage: A Small Meditation ..."
Browse Our Archives
Related posts from Monkey Mind