Zen and the Boundless Way: Reflecting on the Blue Cliff Record, Case 61 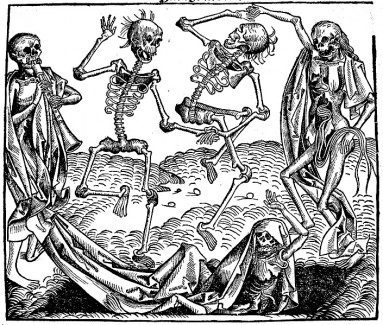 (Xuedou held up his staff and asked: “Do any of you, at the bottom, live and die like this?”)

Fengxue Yanshao was born at the end of the ninth century, and became one of the great Zen masters of his era. Stories of his teaching or of encounters with him are the stuff of quite a few classical koan. And his two sentences in this three sentence koan provides a pretty good example of why.

One of the shadows of our Zen Buddhist way is an inclination to play down the phenomenal world in favor of the vast empty. Words like dream and illusion are sometimes used for physical lives. And while there is truth to what is being said, it also easily becomes a trap. The true part is that nothing is permanent. Gasping after something as it passes is like grasping after a dream. There is nothing left.

However, the world in which we live is not an illusion covering over something authentic. And sadly, there is a bit too often a sort of spiritual dualism among those who enter this particular way. We hear a hint that if one does not renounce the world, one isn’t really on the way. Sometimes rather more than a hint. I’ve heard this out of the mouths of real Zen teachers.

In fact on this path we are invited to encounter the world as the great family of things, as the place where we live, give birth to children, raise families, work, love, fight, do all those things that are our lives. These things are not illusions. They pass. But, they are real in the moment they are experienced.

So, here’s another part of the Zen way. This world, your body, our lives, all of it is lovely. It is good. This place right here. It’s found as we appreciate the individual, the separate, how we are unique, and precious, and, oh yes, passing. This is the Zen way, meeting, engaging, and letting go. Letting go when that is right. And before that living fully into what is, taking responsibility, stepping up the plate. Doing what needs doing. And, as someone once said, letting go of any results. Or, rather clinging to any results.

In Zen there’s a basic assertion that among many other things we human beings (and the whole blessed rest of things from atoms to galaxies and all in between) have two faces. We’re kind of like the god of January and of gates, the divine Janus. One face, aspect, dimension of what we actually are is our discrete identities. You and me, we are, are real and precious, and, oh yes, passing. And, then, at the very, very same time, we also have another face, facet, dimension, call it what you like. In this place, each and every blessed thing (including you and me) are joined, so closely, so closely that we can say we are one. We are entwined in a dance of creation and destruction, a dance macabre, a dance divine. Here what we think, what we say, what we do, all of it has consequences.

But, and: this is the background that we can never forget. Or, only forget at our peril. And this is the lesson that is proclaimed in this case. At the very same time we exult in the individual, we need to know this world births with a thought, a speck of dust, the first sense of separate, not unlike Eve’s taste of that forbidden fruit. Which, indeed, made she and her mate like gods.

And this knowing is a two-edged sword. The thing that keeps us within our separate identity from spiraling ever out, ever farther away from each other is that moment before the nation arises, before we saw our separation, before we took that taste of the forbidden fruit of our knowledge of self and other, of high and low, of good and ill. It is as important.

This is not philosophy, this not a mental exercise. This is a pointing for our actual knowing, and our actual living. This is an invitation into the fullness of what is.

One. Two. Not one. Not two. Can you grasp this as your own life? Xuedo, the Blue Cliff Record‘s own personal Greek chorus comments. Holding up a staff he says, “Do any of you, at the bottom, live and die like this?” It is the great invitation.

We need to notice at the very same time our common root, the deep truth that we are all born out of each other, and how in the final analysis, it and we are all one. We pick this up, we notice this, and we discover perspective and possibility, and the work of our days and lives becomes a way of joy.

June 22, 2017
Love Beyond Beliefs: Or, My Unitarian Universalism
Next Post

June 25, 2017 LOVE & MONEY: A Zen Reflection that Starts With a Christian Text
Recent Comments
0 | Leave a Comment
"James, thank you for this fresh breeze of truth. On Holy Saturday, all pretense is ..."
Robert Jonas The Zen of Holy Saturday: A ..."
"Thanks for this. Putting Amato and O'Brien in my queue. And so glad you included ..."
Zen Buddhism The Short Course in Zen: Five ..."
"love this James"
Roger Butts The Zen of Holy Saturday: A ..."
"The Ten Ox-Herding Pictures are fascinating and have everything in them that anyone needs to ..."
Jay The Fat Man and the Ox
Browse Our Archives
get the latest from
Monkey Mind
Sign up for our newsletter
POPULAR AT PATHEOS Buddhist
1