The Goddess of Reason Is Enthroned 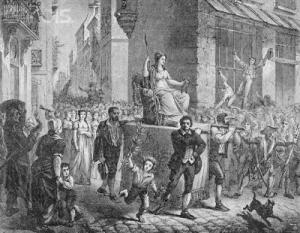 It was on this day, the 10th of November, in 1793, that the revolutionary French Convention proclaimed the investiture of a goddess of reason and a new state sponsored cult designed to replace Catholic Christianity. The deity’s image was installed on the high altar of the once (and future) Cathedral of Notre Dame in Paris.

The goddess and the cult were the brainchild of among others Pierre Gaspard Chaumette, Antoine-Francois Momoro, & Jacques Hebert. Herbet had been a journalist before being swept up in the revolution, becoming one of its early leaders. Momoro had been a bookseller before the revolution. He is noted for among other things the motto “Liberte, Egalite, Fraternite!” Chaumette was also one of the leaders of the French Revolution and the first president of the Commune. He was also a chief architect of the Reign of Terror, and like many others sooner rather than later would find his own neck cut by madam Guillotine.

The Wikipedia article on Chaumette observed his philosophy put “a greater reliance on our instincts and a greater embracing of the apparent world, instead of Christianity’s concern with the afterlife. In his philosophy, he is rather critical of human beings stating that ‘everyone knows that humans are nothing more than what education makes of them; […and thus] if one wants them just, one must furnish them with notions of fairness, not ideas from seventh heaven […] because the sources of all of human’s grief are ignorance and superstition.'”.

Putting it all together the Wikipedia article on the cult tells us:

The Cult of Reason was explicitly anthropocentric. Its goal was the perfection of mankind through the attainment of Truth and Liberty, and its guiding principle to this goal was the exercise of Reason. In the manner of conventional religion, it encouraged acts of congregational worship and devotional displays to the ideal of Reason. A careful distinction was always drawn between the rational respect of Reason and the veneration of an idol: ‘There is one thing that one must not tire telling people,’ Momoro explained, “Liberty, reason, truth are only abstract beings. They are not gods, for properly speaking, they are part of ourselves.’

The overarching theme of the Cult was summarized by Anacharsis Clootz, who declared at the Festival of Reason that henceforward there would be “one God only, Le Peuple.’The Cult was intended as a civic religion—inspired by the works of Rousseau, Quatremère de Quincy, and Jacques-Louis David, it presented “an explicit religion of man.'”

Perhaps, of course, what could have been a very interesting experiment in rational religion devolved quickly into mob reactions to the excesses of the Roman church, and mainly featured acts of desecration, quickly descending into bad theater, and more blood spilled on the ground.

As the great Kurt Vonnegut once observed, “So it goes…”