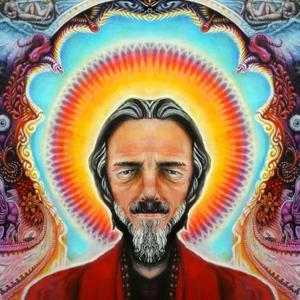 Alan Watts died forty-four years ago on this day, the 16th of November, 1973.

Alan Watts was the first person to write popular books about Zen in the West, beginning in 1937 with the Spirit of Zen,  and more importantly in 1957 with his best selling Way of Zen. He drew mainly on the scholarly volumes just being written by D. T. Suzuki, the first person to write authentically about Zen in European languages, through Watts engaging style made enormously readable and genuinely compelling. As I summarized in my history, “An erstwhile Episcopal priest, engaging raconteur, and scandalous libertine, Alan Watts was also a prolific author whose books created an inviting sense of Zen-as-pure-experience and a do-what-you-want spirituality. These qualities both profoundly misrepresented Zen and led many people to it.”

On that last note, some years later I attended a talk by an American Zen priest. At the end, during the question and answer period, someone asked about Watts. The priest sighed, and then said, “I know there’s a lot of controversy about Alan Watts and what he really understood about Zen.” He paused. And then, added, “But, you know, without Alan Watts, I wouldn’t be standing here on this platform.” I have to say, in large part, that’s true for me as well. In the 1960s and 70s, Alan Watts opened some important doors for many of us looking for a new way.

Now, in my opinion, Alan Watts was at his very best during a brief period when he tried at practice, discipline, and effort. Or, at least stood in their general neighborhood. Raised in England, his natal tradition was Anglicanism, although he formally abandoned it by sixteen for the eclectic Buddhism of the London Buddhist Society. In his late twenties, having come to America and desperate for an occupation that paid something, he decided to become an Episcopal priest. He had not attended college, but by providing a very long list of the books he had read and then showing a suspicious faculty he had not only read them, but profoundly absorbed them, he was admitted into the divinity program at Seabury-Western Theological Seminary in Evanston, Illinois.

Watts graduated with a masters degree in divinity and was ordained an Episcopal priest in 1945. He was immediately engaged as the Episcopal chaplain at Northwestern University. He was thirty years old. It appears to have been an amazing moment. He was wildly popular on campus, and his books were received in progressive religious circles as challenging and compelling. And then within five years Watts was out of the ministry, for many reasons not least of which was when his wife sued for an annulment on grounds of adultery. This part would become something of a pattern for his life.

While Watts offers genuine insights, he is also a master story teller, and the narrative of his vision weaves a web that can entrap as well as illuminate. So, fair warning on that. For me as I re-read him and reflect a little I see how much I am indebted to Alan Watts, and how much, perhaps, he had ensnared my thinking at a critical juncture in my life. This is not completely a blessing.

On the one hand without Watts, I’m pretty sure I couldn’t have embarked on my own investigation of Zen. While on the other hand I had to do a lot of unlearning in order to find what was actually being taught me by my Zen mentors and guides.

Of course he cuts in two directions in his interpretations of religion and psychology. Even as he “corrects” Buddhism through his humanistic, existential psychology, he “corrects” psychology through his wide ranging reading of Eastern texts, most obviously Buddhism. So, he could criticize Carl Jung’s use “of ‘unconscious’ on the one hand an of the content of the liberation experience on the other is too narrowly psychological.” So, he attempted to thread a rather tight needle. And, what is surprising for me is how well he did it.

So, who would profit from reading him today?

Well, me. Looking at some of his writings, particularly Behold the Spirit and Psychotherapy East and West, I not only found myself covering territory that I thought I’d discovered on my own, but that in fact Watts had pointed me toward some forty odd years ago, and which I gradually found for myself. I also found some warnings. Knowing how his life would play out I found myself noticing the narcissistic tendencies presented as a libertarian sort of awakened perspective, which given full reign turn out to be pretty destructive.

That red flag noted, even as Watts always was a tad too facile, a bit too sure of his own perspective, he also saw into something and he shared it with the world. And, this book stands as a monument to the man, his thinking, and his gifts, both for good and ill.

So, for that, I think I can recommend him to those interested not only in the foundations of the Buddhist and Western psychological conversation, but the actual lived experience of that dialogue. he shows us both the promise and the dangers.

Today for those wanting to explore the depths found within the meeting of psychology and Eastern perspectives, specifically, most specifically Buddhism, there are a host of authors I’d recommend rather than Alan Watts. As practical invitations I think of Tara Brach, Jon Kabat-Zinn, Daniel Goleman, Liz Roemer, and Marsha Linehan. For more theoretical and scientific approaches, I think of James Austin, Richard Davidson and Alan Wallace. And specifically weaving Zen Buddhism and Western psychology together in a healthy and balanced way, very much I think of Barry Magid.

That said, Alan Watts is worth reading, or, for some of us, re-reading. He is lucid, he is inviting, possibly he is seductive. Alan Watts’ vision of a spiritual psychology is an invitation into a world at play, where God is playing peek a boo with himself, herself, itself.

Me, I think there’s more to the project. But, for the parts he goes for, there are few as good as Alan Watts in presenting it. 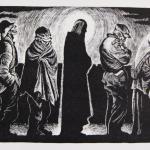 November 17, 2017 Cooking a Life: Zen Teacher Dana Velden's Six Tips With Comments
Recent Comments
0 | Leave a Comment
Browse Our Archives
get the latest from
Monkey Mind
Sign up for our newsletter
POPULAR AT PATHEOS Buddhist
1

Buddhist
Walking the Talk: A Small Reflection on the...
Monkey Mind