Saint Death: Noticing a Feast for Santa Muerte, Our Lady of the Holy Death 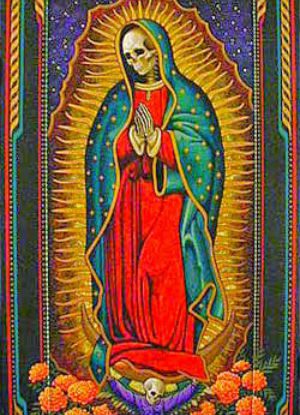 In the Christian calendar today is the feast of All Saints.

However, within some circles, particularly those called “folk Catholics” this is also the feast of Santa Muerte, Saint Death, or Holy Death, or most formally Our Lady of the Holy Death.

Santa Muerte is a female saint of a folk sort. She is certainly in no way official. And possibly, and in my view pretty obviously, actually she is a full on deity. She is the personification of death. And with that a figure of enormous power.

Despite repeated and vociferous condemnation from the Roman Church and others her cult has spread throughout Mexico and now well into the American Southwest. Some see her as a modern incarnation of the Aztec goddess Mictecacihuati. I think this may be true. There are pretty astonishing similarities.

However. Me, I see her as an indigenous American corollary to the Hindu Kali. And more than that. I’m wary of any casual use of the term “archetype.” But. Whatever the historic roots, she seems to be a manifestation of some deep sense of the human heart. There is, as I’ve noted, little in this life as powerful as death. And in the face of terrible poverty and death, of course, of course, she would become the deity to whom many might turn.

I admit while I am fascinated with religions, until relatively recently I’ve given this spiritual phenomenon no particular attention. And, yes, whatever attention I’ve given the cult, it has been accompanied with some slight revulsion. After all the cult of Saint Death is sometimes called the religion of the cartels and most of all of prison gang members. She is of particular interest to prisoners. And of their families. To make matters worse, there have been rumors of human sacrifice. Frankly, I think some of these stories are true. Again, I think of the cult of Kali.

This said, there is something more to this spiritual phenomenon than some sort of “criminal religion.” Not very long ago I watched one of birthright Muslim, and Sufi Reza Aslan’s Believer series that addressed “Saint Death.” (Here’s a teaser about it…)

While there are legitimate criticisms of Aslan’s approach in that show, he did challenge us as viewers to reconsider what we think we know of the cult of Saint Death. And, I certainly have.

For me, it was fascinating to notice how much she has a lot in common with Kali. After all, in addition to the Thugs, Kali was also the principal call into the heart for the great Nineteenth century Hindu saint Ramakrishna. And I can’t say how important Ramakrishna was to me.

Until I’d discovered him through the writings of Aldous Huxley and Christopher Isherwood and their associates, my idea of what gods looked like was informed by my conservative Baptist upbringing modified by my father’s bare and no doubt reductionist atheism. Ramakrishna prayed constantly for a vision of his goddess, Kali, the Divine Mother. He wanted to know her as she was, desperately. I personally understood this prayer. It was my own longing from some aching place in the pit of my being, to know whether God was true, was real.

I think Saint Death is Kali.

Something is going on. Something powerful. It might be worthwhile noticing…

For a longer reflection on her cult, here you go.

October 31, 2017
Save a Ghost: A Zen Meditation for Halloween
Next Post

November 2, 2017 Those Zen Christians: George Herbert Puts His Finger on the Great Matter
Recent Comments
0 | Leave a Comment
Browse Our Archives
get the latest from
Monkey Mind
Sign up for our newsletter
POPULAR AT PATHEOS Buddhist
1 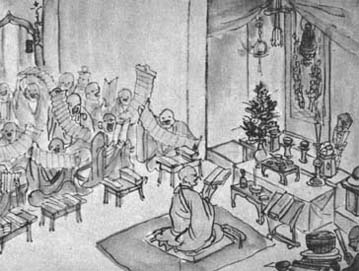