The World is On Fire: A Meditation on the Adittapariyaya Sutta as a Zen Koan

The World is On Fire: A Meditation on the Adittapariyaya Sutta as a Zen Koan December 7, 2017 James Ford 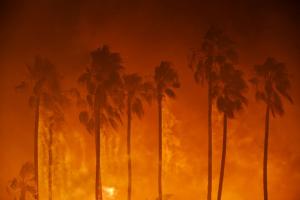 Jan and I live in the land of smog and dreams, also known as the Los Angles basin. After a quarter of a century out of state, mostly in New England, our retirement plan gradually became returning home to California. We ended up in Long Beach. But, we retired to SoCal specifically to be near Jan’s mom, who lives across the metroplex at its eastern edge. That distance, roughly forty-five minutes or an hour, or, okay, a bit more all depending, seemed a happy space allowing mom’s independence, and, well, ours.

And now my mother-in-law has found herself in a mandatory evacuation zone for one of the half dozen fires that as I write this are raging through the northern and north-eastern edges of Los Angeles. Tuesday we had quite the adventure getting out to the San Fernando Valley where we agreed to meet her at my sister-in-law’s home. Mom had her own rather more complicated and not entirely pleasant adventure blocked by the closed freeways and making her way along ferociously crowded secondary roads. There she was, surrounded with a ring of fire.

I’d been commenting on all this as it unfolded at my Facebook page. And as a comment on my comments my friend Margaret Rowan posted a link to the Adittapariyay Sutta, the so-called Fire Sermon. It really seemed just about perfect in our moment.

T. S. Eliot who echos part of the Fire Sermon in his magisterial poem the Waste Land famously opines how it can be counted as comparable in importance to Jesus’ Sermon on the Mount. With a caveat or two I think this is profoundly true. The Fire Sermon isn’t a long text. In Nanamoli Thera‘s English translation we get the entire thing in four hundred and twenty-five words:

Thus I heard. On one occasion the Blessed One was living at Gaya, at Gayasisa, together with a thousand bhikkhus. There he addressed the bhikkhus.

“Bhikkhus, all is burning. And what is the all that is burning?

“When he finds estrangement, passion fades out. With the fading of passion, he is liberated. When liberated, there is knowledge that he is liberated. He understands: ‘Birth is exhausted, the holy life has been lived out, what can be done is done, of this there is no more beyond.'”

That is what the Blessed One said. The bhikkhus were glad, and they approved his words.

Now during his utterance, the hearts of those thousand bhikkhus were liberated from taints through clinging no more.

Talk about a ring of fire.

And I think Eliot is right. The Adittapariyaya Sutta is an amazing summation of the Buddha’s wisdom. At least as significant in its way as Jesus’ famous sermon on that mount.

I suggest the Fire Sermon is a koan. Not as a thorny problem as that word “koan” has come to mean in our popular culture. But, in the sense of the authentic Zen tradition, where a koan is a pointer to a profound truth and with that an invitation into our own most intimate encounter.

Here with the Adittapariyaya Sutta we have a clear pointer to a fundamental truth about who and what we are, and a most intimate invitation. We have a koan. We have, in fact, the only koan.

With that here’s the secret pointing of the koan. Here’s the invitation of the koan. It is all passing, as a fire burns and leaves nothing but ash, and even that ash will blow away with the first breeze. Nothing is permanent. Nothing. Absolutely nothing.

However, that’s not quite it, either. It is easy to think the call is to put out the fire. And that’s it. Sadly, a common enough response among the Buddhist community, but also, sadly, missing the point.

It is actually a bit messier. And a bit more glorious.

Rather, as a way in, here’s a question. What if we step into the fire full on? What if we allow the fire to consume us completely? Without reservation? Without hesitation?

So, just a bit more.

Burning. Burning. A ring of fire.

Now, in Eliot’s poem there is a turning to the divine, an appeal to the great other. But for me interestingly, deeply interestingly, that line quickly moves from a simple appeal to a greater power, to a higher power, to something rather more mysterious: to a simple call. Like that call to Amida. Like that call to Jesus. And beyond either name, to just a calling. Just a call. Something which in a moment loses any sense of self and other, where I am forgotten, where all is forget, where even the divine other is forgotten.

Instead just a call.

Just our heart revealed with no extra.

A ring of fire.

(The photograph is from the LA Times…)

December 6, 2017
Shakyamuni's Enlightenment & Ours: A Zen Priest Reflects on Bodhi Day
Next Post

December 8, 2017 Bodhi Day
Recent Comments
0 | Leave a Comment
"happy birthday old scout! how true the pome! my 73rd is this coming september 29th: ..."
Brian McInerney The Zen priest recalls a poem ..."
"I'm not sure what you mean by the phrase," Divinity School, Cambridge," Perhaps it is ..."
B J M Mr Emerson Proclaims a New Infidelity
"Marion Mountain, author of The Zen Environment, was seminal in this book as well. http://www.cuke.com/Cucumbe..."
BrightHeart Lewis Headrick Sometimes It Takes a Community to ..."
"Ironic coming from someone who really wasn't technically properly ordained in Soto Shu and was ..."
La Resistencia Soto Zen Buddhism in North America: ..."
Browse Our Archives
get the latest from
Monkey Mind
Sign up for our newsletter
POPULAR AT PATHEOS Buddhist
1