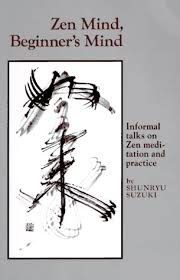 Yesterday at our Weight Watcher meeting the leader asked a question. “Who here is an experienced beginner?” What she was looking for were people willing to acknowledge that harsh fact of starting the program, falling off, then starting again.

The intention, pretty obviously, was inspiration. And it was. But for me that triggered all sorts of other things.

But first what we were being molded into. Recognition. I’m now pushing close to two years on the program. I’ve lost a great deal of weight. And then I gained a bunch. Nowhere near the loss, but enough to put the fear of God in me. And, so, yes, beginning again. Totally get that one.

And, as I am a Zen person, it triggered thoughts about my larger practice, the way of my heart.

That lovely, lovely teacher of my imagination, and a little, of my history, Shunryu Suzuki, often spoke of beginner’s mind. People are so taken with that phrase they sometimes add in capital letters, so “Beginner’s Mind.”

Of course, that’s missing the real point, or rather points of that particular invitation.

The roshi added in his own comment on beginner’s mind, about how with an expert there are few possibilities, but as a beginner there is a world of possibility. Simple and practical. And echoes the Weight Watcher call. And there is more to the matter.

This Zen way and the phrase about beginners and a beginner’s mind is an invitation into humility. It is also an invitation into mystery. That’s partially why the Korean master Seung Sahn liked the rather more startling and oblique “only don’t know.”

Itself drawing upon a foundational story of the Zen way, when the mythical founder of Chinese Zen Bodhidharma is confronted by the emperor who has been enraged to be told all his good works, his foundations of monasteries, his aid to the poor generated no merit. The emperor then demands to know who this monk really is? And the monk responds, “I don’t know.” Or, in some versions the “I” is stripped away, and it becomes simply “Don’t know.”

This place. Just this unfolding reality, just this mystery.

And, I found this trigger one more thing.

There’s that old, old joke about the person who sees a musician, often someone like Arthur Rubinstein or Jascha Heifetz, or sometimes just someone with an instrument identifying them as a musician, gets out of a cab on 57th Street in Manhattan, and the passerby asks the musician, “How do you get to Carnegie Hall?” To which the artist replies, “Practice.”

Here is the echo of what I say in my capacity as a Zen spiritual director when meeting with people in the interview room, over and over again. “It’s okay. You don’t need to beat yourself up. Just start again. Just start sitting again.”

What I love about beginner’s mind is that it is all these things.

It is the humility. sometimes this is presented as humiliation. I’ve heard that in the dokusan room. I’ve felt it returning to Weight Watchers after just eating whatever, and watching the scale drift up. But, clinging to humiliation would be a mistake. That’s the near enemy of the gift.

We’re called into humility in the face of it all. The heart of a true beginner. And with that we discover an opening into mystery.  The real beginner’s mind. The real don’t know. The beating heart of the cosmos and our own beating hearts noticed as one heart. Mystery piled upon mystery. Which is of course the real place for us all.

Just noticing. Just attending. Just being present. Over. And, over again.

We witness. Actually, more than witness, we experience the unfolding which we have a hand in, but not control over. And, This is important to notice. It comes and goes. We notice. We forget. The invitation then becomes starting over. Another kind of beginning. The practice of beginning.

And that, near as I can tell from my years on the way, is it.

Not knowing. Beginner’s mind. Over, and over. Just like the beating of that heart which we cannot tell. Is it mine? Is it the world’s?

January 20, 2018 Soto Zen Buddhism in North America: Some Random Notes from a Work in Progress
Recent Comments
0 | Leave a Comment
Browse Our Archives
get the latest updates from
Monkey Mind
and the Patheos
Buddhist
Channel
POPULAR AT PATHEOS Buddhist
1