Three Things: A Zen Priest Reflects Briefly on How to take the Tradition Seriously 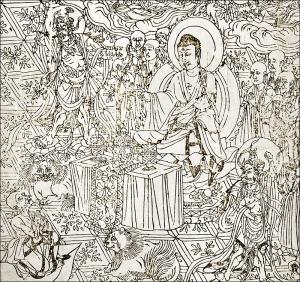 I belong to a number of Facebook groups that are concerned with Buddhism and Zen. Largely I enjoy them. And I certainly learn things, both positive and negative.

So, for instance, I was just reading a note from someone who has found a Pali text that he seems to think is more important than all the others. In fact as he lays it out against other Buddhist texts he discerns an ill he names syncretism. And from there, well, he’s off to the races.

This set me to thinking a bit about sacred texts and their place on a spiritual path.

One of the conceits of our culture appears to be that one can find the original and with that the true thing. I have a long interest in Christianity. It is a tradition with a particular focus on a sacred text. And that, well, obsession has marked a great deal of Christian scholarship, looking for the text behind the text, the true word. A lot of ink, for instances, has been spilled in trying to find “Q.”

But, I would ask my Christian friends, that little collection of sayings and maybe miracles, if it even exists, is it really going to take you to the mystery that your religion seems to offer? Rhetorical. My answer is no. The real is a bigger mess. It actually needs the syncretism, that mixing of wisdoms to become the joy that it can be. And this is true for Buddhists, as well.

Not that the texts aren’t important. Not saying that, by a long shot. But, I suggest to my Buddhist friends, whatever school you might belong to, you might consider how to engage spiritual texts in a way that is actually helpful. And just trying to find the one true document is not likely to be the most helpful way. They are important. One can find critical things in the texts of your spiritual tradition. And they are absolutely worth investigating. More than that, I would say. We need to.

Now, in Buddhist circles there are concerns about canonicity. One of the big divides between the way of the Elders and the Great Vehicle are what texts are acceptable, what counts as the “word” of the Buddha.

So, take it seriously. And…

As a Zen Buddhist, I feel an obligation to know something of the source materials, of the texts both from the Indian inheritance and of the mess in China that becomes Zen. And with that knowing something of a few of those texts. For me the Platform Sutra, the Prajna Paramita cycle, bits and pieces of the Avatamsaka and Lotus sutras and a particularly deep digging into the koan anthologies are seriously important. Seriously important. (And, yes, yes, Dogen and Hakuin. Okay?)

For me, as firmly on the Zen way, well, as firmly as one can be on a path that is all about motion, I find that taking the texts seriously is only one facet of the jewel. There is also finding the still spot within the motion. And, that, well for that the texts only point.

To authentically engage the way is a path of mutual verification (a term I’m borrowing from another discussion). There are three aspects to the way. We need to read. We need to have friends. And we need our own practice. The important thing is to bring these all together. Each is all of it. And none is complete.

Read. Meet with companions and guides. And, throw yourself into the practices.

Let each challenge, correct, and verify the others.

January 6, 2018
A Small Reflection on Zen's Several Ways, Together With Some Thoughts About Zen Teachers
Next Post

January 8, 2018 A Zen Priest Plays With the Three Demons
Recent Comments
0 | Leave a Comment
"This reminds me of the story about a priest holding a candle doing a one ..."
Catherine A Meditation on What My Grandmother ..."
"Fun talk. Here's my translation of the case:Raised: Guishan asked Yangshan, “Suddenly there is a ..."
Gregory Wonderwheel Book of Equanimity Case 37
"There is a novel based on the philosophy of the Ten Ox Herding Pictures called, ..."
Jay A PILGRIM’S PROGRESS:  Zen, Maps of ..."
"That's a nice cartoon. It always fun to go back in time and see how ..."
David Brevik Fiddlesticks: Recalling the First Colored Sound ..."
Browse Our Archives
get the latest from
Monkey Mind
Sign up for our newsletter
POPULAR AT PATHEOS Buddhist
1 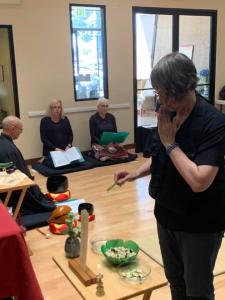