How Old does a (Zen) Teacher have to be? 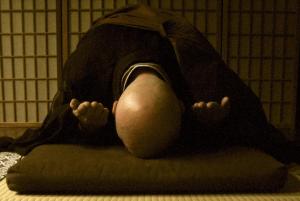 A friend recently sent me a note asking if I were the person who was referenced by a young Zen teacher who tweeted about how she had been told by an old (male) teacher that she was “too young” to be teaching. I found it unlikely as I am a fan of that younger teacher. But, then, I say things on occasion, and who knows how it could be heard? (Okay, and on occasion I can also be a complete jerk…)

So, I asked. She named the person. And my thought was, isn’t he one of the younger teachers? Then I recalled how he is probably now in his early fifties and has been practicing and in a monastic setting for twenty years and change. And still twenty years and change is younger than me. I guess these things are in fact all relative…

And it set me to thinking a little about teaching, and specifically teaching Zen.

What makes a Zen teacher? And, is age a significant factor?

Here in the West which is a bit of a Wild West still so far as Zen is concerned, there are no universally accepted standards against which titles like Zen teacher and Zen priest can be measured. Although, that said, something of a mainstream has appeared. There are gatherings of teachers. Two principally, the American Zen Teachers Association and the Soto Zen Buddhist Association. Together they probably count for the larger majority of Zen teachers in North America.

And looking at that “mainstream” I think for the most part we see people who have been practicing for ten or twenty years, usually racking up enormous amounts of time on the pillow, both in individual daily practice, but also through retreats ranging from three days to three months at a stretch. Some have spent considerably longer amounts of time in monastic settings. One of those groups, the American Zen Teachers Association assumes a “teacher” will have sat about a year’s worth of days of full on retreat. That’s a lot. And, unless one is living in a monastery, it takes a long time.

So, in addition to being a Soto priest I’ve been a practitioner of koan introspection within the Soto reformed style first developed by Daiun Sogaku Harada. Once one “clicks,” that is tumbles to the fundamental insight beyond form and emptiness, then it takes between five and twenty years to work through the “system.” The average appears closer to the longer end.

Others have other standards for marking out someone who should be guiding others. The pillow is almost universally acknowledged as critical.  The word “Zen” itself means meditation, after all. Koans are seen as essential by a large minority. But, there are other things, and some point to those other things as important.

And whatever our emerging standards here, for those of us who are Soto people who go to Japan find an entirely different set of standards. There one finds the normative training to prepare to become a parish priest is a couple or three years of intensive monastic training. And, while still a significant minority, increasingly people are going to Japan to train and return fully qualified Sotoshu priests. Here in the West it is in fact the only way to truly be young (by which I mean under one’s mid or late thirties) and to be that fully transmitted priest. My friend who was told she was too young fits into that category.

So, lots of different standards.

And, so, who teaches? And is there an age expectation?

As those who follow this blog mostly know, in addition to being a Soto Zen priest and teacher I am an ordained Unitarian Universalist minister. I served UU congregations for a quarter of a century. Some thirty years back when I was in seminary I attended a presentation on getting one of those parish minister jobs and vividly recall a speaker explaining some statistics. The only person who would have a harder time finding a position than an unattached gay man was a young person. As among the hard requirements was an undergraduate degree followed by three years of seminary we mean someone in their late twenties or early thirties. (And for those who care being an unattached gay man is no longer a disability, near as I can tell, in obtaining a call to a UU parish.)

Digging in a bit deeper, at that time it was felt by many, particularly those charged with finding a minister for their church, that a younger person couldn’t sit helpfully with someone dealing with the death of their spouse or was perhaps themselves facing something as precarious as a diagnosis of dementia. Those big things. Those terrible things. Genuine questions. Hard questions. And, I admit, myself, how it can be extremely hard to be fully present to someone in the hardest moments of their lives if you, the minister, hasn’t had both an experience of terrible loss one way or another and then has lived with it for some time. Hard. Not impossible. But hard.

Similarly, I suspect, how does one guide people on the great Zen way without similarly having lived into the matter over years? Not just mastered the disciplines. Not just having had those mysterious experiences of opening the heart. But who has experienced that mysterious marinade over many years…

And, returning to my young colleague. She has actually told me that her beginning to teach is all my fault. I did tell her she should be stepping out and up and doing it. In my view she should. She has a lot to offer. I see wisdom in her. Is it all put together nicely? No. But, then that’s true of everyone I know. And, I know its true of me. We’re all mixed bags.

There was a Zen worthy, I forget in the moment who, who announced at some point that he was ready to teach a greybeard the nuances of the great way and to listen humbly to a child of five if that child had something to teach.

But can someone with the title teach and guide the important things of the Zen way. Having some feel for the mysteries of Zen meditation is critical. Knowing the supporting practices is powerful. If a priest, offering the sacramental practices is something I’m finding ever more important to me.

Some knowledge of the way. A lot of compassion. Some skill in sharing the details. Knowing a little of the byways of the heart.

Find someone with those characteristics, young or old, be happy, you’ve found a Zen teacher.

March 30, 2018 What Makes a Good Zen Student?
Recent Comments
0 | Leave a Comment
Browse Our Archives
get the latest from
Monkey Mind
Sign up for our newsletter
POPULAR AT PATHEOS Buddhist
1