How to Start a Zen Group 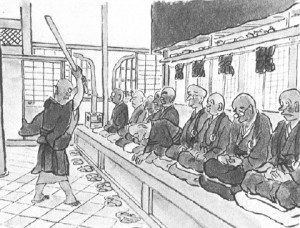 A Facebook friend active with a Zen meditation group asked me what I thought about growing sanghas, our gatherings of Zen practitioners. An interesting question. And, actually, particularly so for me at this moment in my life. After being part of a project with established Zen centers and lots of people for a number of years, I now find my spouse and I relocated back to our native California. And with me now scant months shy of seventy, starting one more Zen meditation group. So, yes, I do think about it.

There’s an old story about a small church that has fallen on hard times. There’s a congregational meeting where there are a series of reports, all about failure; failure in programming expansion, failure in membership growth, failure in fund raising. In the midst of the litany of despair someone says, “We’ve tried everything.” To which an old woman in the back of the room asks, “Have you tried religion?”

Religion has become a negative word of late. So, let’s say, “Have you tried spirituality?” The point, as I see it, starts with who are you? What do you want to be? “Growth” by itself as a goal, for anyone who thinks about it for a minute, is meaningless.

Be authentic. Be about something. Be real.

Second. Have clarity of purpose. What do you want to be? A place to sit? That’s a noble enough goal. Actually Jan & I started several groups with that as our goal. We were going to sit (that’s a Zen term. It means meditation in the Zen style) anyway. But its nicer if there are others to sit with. Several groups grew out of that simple goal.

But, you may have larger ambitions. And that’s alright, too. But, knowing what they are is very important. So, right now, I want to be part of a community of practice, something that includes that opportunity to sit with others, but also includes retreats, and, opportunities to explore what Soto Zen priesthood is as a spiritual practice, one that nestles with lay practice as an equally important thing. I think of it as a “full service” temple. It’s a goal.

Maybe you want a monastery. That’s a goal.

Going farther afield, maybe you want a business that offers fee for service meditation and related practice. Another goal.

Whatever it is, we need a goal, a purpose, what is often called a “mission.” And, small or grand, it should be able to be clearly articulated. And, at the same time, I’ve learned as important as it is to have that goal, it should be held lightly. Because it will change. If you’re fortunate enough to attract others to your project, soon it will be theirs, as well. And, with that, the goal begins to mutate. Being flexible is generally a smart idea.

Third, have a place to meet. Where you are will determine many things. Is it your living room? Well, that has consequences. Is it a room at a nearby church? (One might be surprised at how many how many Zen groups began at some Unitarian Universalist church.) Are you renting a dedicated space? Or, perhaps you own a property.

Fourth, meet regularly. It is probably not possible to create a Zen community that meets less than weekly.

Sixth, be welcoming. There’s a playful saying in Christian churches about “God’s frozen people.” Alluding to the Scriptural reference of “God’s chosen people,” for my scripturally illiterate friends. It references that chilly reception too many people experience in going to a new church. Well, we get that in Zen, as well. And in fact, it’s often worse, as the primary practice is sitting down, shutting up, and paying attention.

If growing the community is part of the mission, well, it’s important to let people know they’re welcome. This can be done any number of ways. For the smallest group it just requires there be someone who has the task of welcoming people, making sure they know what to do, and when. For larger groups, that human touch remains important, but also printed materials are important.

If you have a posted time to begin, just locking the door as some Zen groups do, well, it may reinforce the discipline of the practice, but the majority of folk who are just checking the sangha out are going to get a somewhat different message.

The point is we are offering something precious and potentially life changing. It’s a gift and if you are called into sharing it, you take on some responsibilities.

And if six steps are too much, here are three:

Know what you’re doing. Be generous. Be welcoming.

None of this is rocket science. Just some common-sense suggestions. However, perhaps worth bringing to consciousness.

I do hope this is helpful.

March 1, 2018
Zen & Literature: A Review of Into Terrible Light
Next Post