The Buddhist David Hume & the Endless Unfolding of the Human Heart 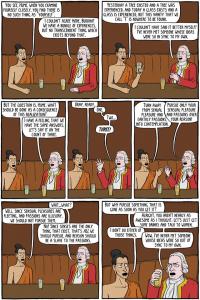 Okay, not really a “Buddhist” Hume. But, there are intriguing connections. And, at least worth noting today, his four hundred and seventh birthday.

David Home was born the 26th of April, 1711 in Edinburgh. Later, he would change the spelling to Hume as that was how the name was pronounced. Hume came from a middle class family, his father an advocate. However, with his father’s death, finances were tight.

A prodigy, he attended the University of Edinburgh possibly as young as eleven, certainly by the time he was twelve. Perhaps not quite as spectacular as that can sound, at the time the average age of matriculation was fourteen, but it did signify a singular intellect. Hume started studying law, but quickly shifted to philosophy.

Dissatisfied with his teachers Hume left without a degree to study on his own. Not long after he came down with an ill-diagnosed breakdown, cited in the Wikipedia article about him, as a “disease of the learned.” This led to a reluctant regime of exercise. Apparently not massively successful. He continued to gain weight throughout his life.

Needing a source of income he became a “merchant’s assistant,” which allowed him the opportunity to travel. Eventually he settled back in Edinburgh, where he became a librarian at the university. He is known to us as a historian and philosopher.

But, for me, its the Buddhist connections, admittedly vague, but, arguable that causes me to pause and think about the old Scots philosopher.

Alison Gopnik wrote a lovely article a few years back that was published in the Atlantic. It’s worth a read.

She says of his masterwork, A Treatise of Human Nature that

Hume rejected the traditional religious and philosophical accounts of human nature. Instead, he took Newton as a model and announced a new science of the mind, based on observation and experiment. That new science led him to radical new conclusions. He argued that there was no soul, no coherent self, no “I.” “When I enter most intimately into what I call myself,” he wrote in the Treatise, “I always stumble on some particular perception or other, of heat or cold, light or shade, love or hatred, pain or pleasure. I never can catch myself at any time without a perception, and never can observe any thing but the perception.”

It sure has Buddhist like elements to it. And there are many. Among my favorites is his description of a Bundle theory of the mind, which, well, has significant Buddhistesque characteristics.

And, every once in a while people wonder if the Scots philosopher simply reasoned his way there, or, whether there might be some kind of Buddhist connection. Which as an Eighteenth century European made it possible but highly unlikely. The bulk of Professor Gopnik’s article traces those possible connections between Hume and Father Ippolito Desideri, a Jesuit missionary who spent several years in Tibet. It isn’t conclusive, but it is pretty suggestive.

However, for me, it isn’t necessary that Hume had a direct or even an indirect experience of Buddhist thought. His own descriptions show his arrival at these views through pretty straightforward adaptations of tools he found within the Western tradition. Specifically the brilliant thought that one could apply the same rigor as Newton applied to physics to the questions of human existence.

And with that, well, some very interesting things follow.

For me it is a celebration of the great human heart and the insights that can lead to the healing of the great hurt. Of course people will discover the secrets of our minds and hearts through close examination. And, then, well, then people will frame them and work with them within the cultural matrix of their lives. Of course.

And, I think some people who’ve found the great secrets have worked through them better than others. And, for me the Buddha pointed a way that has been generally more useful than the brilliant librarian Hume. And, for me, actually, even the Buddha was pointing a way that allowed others to walk to ever more coherent expressions of the great insights. For, me, Zen.

And, a caution. All preachings of those insights and what follows are themselves conditioned. Like all things. And, therefore, incomplete. Even, if as with Zen, worthy of a lifetime, still, never complete.

Always, always we are called on, to ever deeper exploration, to deeper investigation.

The ways of the heart.

Thanks to the ever brilliant Existential Comics for Buddha & Hume drinking panel.

April 24, 2018
The Buddha's Message in Brief: A Paraphrase from the Dhammapada
Next Post

April 29, 2018 Instructions for Chair Zazen
Recent Comments
0 | Leave a Comment
"My standard warning and a concern:1) At the intersection of religion and politics, it is ..."
amylynn1022 ZEN & SOCIAL JUSTICE: Ten Rules ..."
"Thank you so much for both the written piece and the video. I have long ..."
Gary Johnson A HOPEFUL DOUBT: A Zen priest ..."
"All religions ask the same questions that all sound like "I hurt". And all religions ..."
LuLu ARE ALL RELIGIONS ONE? A Zen ..."
"I like this beautiful succinct essay"
Errol THE CONNOISSEUR OF SADNESS: Exploring The ..."
Browse Our Archives
Follow Us!

Break Through Is A Must: More...
Wild Fox Zen
3

The Barrier That Has No Gate
Bodhisattva Road
4