On Praying for the Dead: Zen and the Mysteries of Dedicating Merit

On Praying for the Dead: Zen and the Mysteries of Dedicating Merit May 21, 2018 James Ford 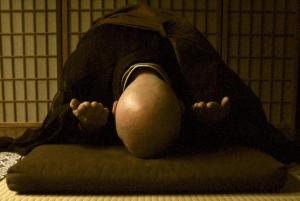 While I started out my Zen life within the warm embrace of Soto Zen and was ordained unsui and lived in a monastery following the Japanese inheritance for several years, the vast majority of my Zen formation was within a lay lineage that emphasized little beyond regular meditation, frequent retreats and dedication to the practice of koan introspection developed by the Soto master Daiun Sogaku Harada at the beginning of the twentieth century. The discipline was adapted from the Takujo/Hakuin system within Japanese Rinzai.

All that’s still very much a part of my life. And. In my dotage I’ve found my heart calling me back to an investigation of my Soto roots, and particularly what practice looks like within that Soto inheritance. Soto as it comes to us from Japan is essentially a priestly practice with roots within monastic life. So in addition to that boatload of zazen there is within monastic forms a liturgical life.

For many years I have to admit I was essentially dismissive of the liturgy as the “business” of the sangha. It was rooted in the early Buddhist assertion that gifts given to monks (and a bit later to nuns) generated more benefit than gifts to anyone else. This may have been critical in garnering support for the community of practice, for the spiritual “professionals.” And, it felt vaguely distasteful to me.

But, as I both age and spend more time with fellow practitioners who emphasize the liturgical practices of Zen, I find my feelings become ever more messy.

Last year I described visiting with an old friend, an Episcopal priest who is also a Zen teacher. I attended a mass she celebrated. And, among the small band of mostly elderly people I suddenly noticed “the whole universe was present. All the angels of Western faith and all the devas of the East were present and circling around that little altar that somehow became the navel of the cosmos.”

And, perhaps critically, “Without thinking about it, without worry about theology or proper decorum, without any concern but a longing to come ever closer to the moment of creation, I stepped into that small circle.”

And now, for the past months I’ve been attending the Wednesday and Friday morning zazen meeting led by my friend Gyokei Yokoyma Sensei. For one thing it is nice to sit in a group where one is not in charge. And, I get more than my fill of that with the Blue Cliff sanghas. For another I love that early morning schedule. The way the light comes up from the darkness as we begin, the mix of smells, particularly the slight hint of mildew mixed with sandalwood incense that instantly returns me to my youth sitting at the old Berkeley Zendo. It is delicious.

But, the main reason I’m doing this is that I have committed myself to trying to learn the sacramental functions of a Soto Zen priest. Okay, relearn. I first learned them pushing on fifty years ago. But as I noted after my time in the monastery I ended up practicing with a koan teacher who was not a priest, and well, that liturgical part of my Zen life more or less fell away.

I’ve found this in some ways just relearning to bow. Never a bad thing. Especially for anyone who is walking the Zen way.

Anyway, there was a moment when Gyokei, functioning as doshi, the celebrant during the liturgy, went up to the altar and offered a stick of incense. It was a thing of intense beauty, simplicity, grace. If he had any other thought in his mind it was in no way discernible in his movements. He was present. He was offering incense.

And, watching, maybe the better word is witnessing, I felt much the same I did when my friend Mary was saying mass. In that moment when he held the incense to his forehead and then placed it in the pot, the whole universe was birthing. All the angels of Western faith and all the devas of the East were present and circling around that little altar that somehow became the navel of the cosmos.

And, me, in that moment without thinking about it, without worry about theology or proper decorum, without any concern but a longing to come ever closer to the moment of creation, I felt my heart drawn into that small circle.

And in a moment we all bowed.

But, also, the universe joined in. It really did.

So, I have no doubt there is an element of the business of buddhism in the liturgical moment dedicated to the generation and transference of merit. And, it is rather more complicated. At least it is in my experience.

So, what do I think about this? Well, I have something of a working hypothesis.

It sort of starts with my understanding that the Eastern Orthodox Church, while it prays for the dead has no theology of how it is supposed to work. They just do it. And what can I say? How totally “zen” that is. And certainly a pointer.

And then I go on from that inspiration.

In Mahayana Buddhist teaching there is something called Trikaya. It is an explanation of reality, which points to three aspects of what is. Dharmakaya is the absolute realm. Here, on the Zen way, there is no self, there is no other, all ideas, all words burn away. Nothing more may be said. And even the words approaching it are all false. Then, there’s Nirmanakaya, the realm of history. Here is where we normally live, with cause and effect, gain and loss, birth and death.

These two things taken together are sometimes called the Two Truths. Form and emptiness. And, the secret truth, they are not two, nor are they one.

And, the third is the Sambhogakaya, the realm of miracle. Originally it meant quite literally miracles, bi-location, clairvoyance, all the psychic arts. Fine. But there is another way of engaging this, as I see it.

I’m particularly taken with what the archetypalist psychologist James Hillman considered soul to be. As someone who doesn’t think there’s a parasite inside us just waiting for the moment it can break free, I found his view particularly helpful. And, more so today as I engage in the sacramental practices of Zen.

Soul hasn’t fared well in modernity. You may have noticed how spirit and self, and sometimes mind are, in practice, in our times, all taken as synonyms for soul. This is a problem. Hillman suggested this represents a reductionism in our current culture leading to a simple Cartesian divide “between outer tangible reality and inner states of mind, or between body and a fuzzy conglomerate of mind, psyche, and spirit.” We can also see a dangerous corollary between simply seeing form and emptiness as the sum total of our experience. It lacks something.

And I think I’ve put my finger on one way of seeing that “something.” We can find it in the classical Buddhist understanding of the Three Bodies. Within the Sambhogakaya the absolute and the phenomenal meet, and there are eruptions, perhaps not disruptions of time and space, but absolutely disruptions of our sense of what is, which are might close.

In short Sambhogakaya is soul, at least its Hillman’s soul.

My working hypothesis. It’s a call into what I think of as magical realism.

It almost explains what I’m experiencing. And, it also offers a pointer. Don’t cling to the story, to the explanation. The map is never the territory. The explanation always falls short. And, actually, the closer to the reality the explanation is, the more dangerous and misleading it is.

So, Instead, I find myself invited into the moment itself, into that place where the emptiness of all things and the play of all things meet. That magically real place.

All of it found in a bow.

Finding how merit is constantly birthing into the world, and finding my heart wishing it to the healing of the world.

Past. Present. Future. A mysterious thing.

May 20, 2018
Behold the Spirit: A Meditation on Alan Watts & His Brief Experiment With a Mystical Christianity
Next Post

May 22, 2018 Zhanglu Zongze's Guidelines for Seated Meditation
Recent Comments
0 | Leave a Comment
"this geelong seafood blog is great. geelong seafood"
John N LIVING IN THIS FLOATING WORLD: A ..."
"https://www.youtube.com/wat..."
Robert Flannery Narcissus Drowned: The Zen Priest Takes ..."
"long live Theo-poetics! and universalism! and so on and so forth!"
Roger Butts That New Universalism: A Smallest Meditation ..."
"Thank you, James. You explained prayer to me as a way even I could accept. ..."
Ohyetwetrust A Meditation on What My Grandmother ..."
Browse Our Archives
get the latest from
Monkey Mind
Sign up for our newsletter
POPULAR AT PATHEOS Buddhist
1