Zen Master Zengetsu’s Pointers on a Life Worth Living 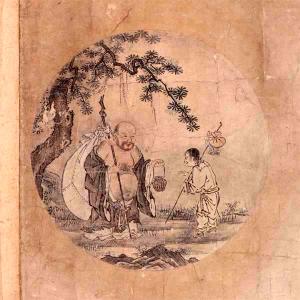 The following is a list of pointers on the way attributed to Zengetsu, described by Paul Reps & Nyogen Senzaki in their small early classic of Western Zen writings, 101 Zen Stories, (later compiled with other similarly slender volumes as Zen Flesh, Zen Bones), as a Chinese Zen master of the Tang Dynasty.

I don’t know anything at all about Zengetsu beyond this list and a poem collected in Zen Poems of China & Japan, translated by Lucien Stryk & Takashi Ikemoto:

Mind, mind, mind — above the Path.
Here on my mountain, gray hair down,
I cherish bamboo sprouts, brush carefully
By pine twigs. Burning incense,
I open a book: mist over flagstones.
Rolling the blind, I contemplate:
Moon in the pond. Of my old friends
How many know the Way.

So, pretty clearly, the old guy knows of which he speaks.

And, just as it should be, I find his list both compelling and annoying here and there.

So, as you read it, perhaps you’ll find for yourself the points of congruence and disagreement. I would only add for you, if you haven’t yet noticed, that in my own life I’ve found those points of disagreement where the juice often resides.

I’ve made the finest of editorial adjustments to the text as presented by Reps & Senzaki.

Living in the world yet not forming attachments to the dust of the world is the way of a true Zen student.

Even though alone in a dark room, be as if you were facing a noble guest. Express your feelings, but become no more expressive than your true nature.

Poverty is your treasure. Never exchange it for an easy life.

A person may appear a fool and yet not be one. Such a person may be carefully guarding hard won wisdom.

Virtues are the fruit of self-discipline and do not drop from heaven of themselves as does rain or snow.

Modesty is the foundation of all virtues. Let your neighbors discover you before you make yourself known to them.

A noble heart never forces itself forward. Its words are as rare gems, seldom displayed and of great value.

To a sincere student, every day is a fortunate day. Time passes but never lag behind. Neither glory nor shame can move the wise.

Censure yourself, never another. Do not discuss right and wrong.

Some things, though right, were considered wrong for generations. Since the value of righteousness may be recognized after centuries, there is no need to crave immediate appreciation.

Live with cause and leave results to the great law of the universe. Pass each day in peaceful contemplation.

July 4, 2018 Toward a Declaration of Interdependence: A Buddhist Contribution
Recent Comments
0 | Leave a Comment
Browse Our Archives
get the latest from
Monkey Mind
Sign up for our newsletter
POPULAR AT PATHEOS Buddhist
1