Call me Roshi: A Small Meditation on Zen Titles in the West 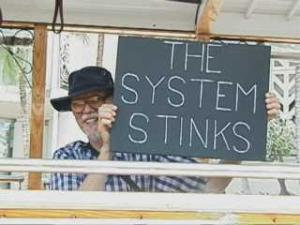 Brad Warner who made his bones as a Zen person in the West with his book Hardcore Zen, which, to put it succinctly can be seen as a punk introduction to the Zen Way, has as he’s aged become a bit of a grump. Which may be the general fate of that generation. But, also, I have to admit, it’s a part of what I like about him.

Today on his Facebook page he has returned to a popular theme among the get-off-my-lawn crowd of Zen teachers and priests: the inflation of titles among Zen practitioners in the West.

He points out that in Japan people don’t call themselves Zen masters, and particularly they don’t use the title Roshi. The term which I believe literally means “venerable elder,” is within the Soto school strictly an honorific. Well, with the exception of a couple of function titles in large monasteries. In the Rinzai school it is a title for an extremely high rank, comparable to the Soto shike, where there are no more than a double or triple handful in the country.

And. Here in the West the title is tossed around like confetti.

Yesterday Jan & I were in San Francisco to attend the ordination of a dear friend. We had reserved seats with our names written on small cards placed on them. Mine read “Roshi James Ford.” Now, technically, within Japanese custom this isn’t out of bounds. I am an elder. And I have been a priest for pushing on half a century. But, also. when I completed formal koan study in the style developed out of the Hakuin Takujo lineage by the Soto master Daiun Sogaku Harada, as part of the ceremony of recognition, I was also presented with the title “roshi.”

The problem as I see it is that there is a shifting in usages as Zen comes from East to West. In addition to simply coopting titles as salve for our individual egos, here many titles are actually conferred. So, what was an honorific in Japan, like sensei and even roshi are here frequently actual titles.

We are in a liminal time where the traditions of the East are loosening, while in the West they are still forming.

That said, I personally find this period of title inflation often silly. I, too, enjoy yelling at the kids to get off the lawn. So, I share a bit of Brad’s disdain. But, and here’s the deal, only a bit.

Me, I have a long and complicated relationship with titles. On the one hand I am a child of the 1960s. We are (rather quickly becoming a “were” I notice) notoriously anti-establishment. And titles, well, they’re the province of “the man” as we used to say. On the other hand I have over the years collected any number of titles.

I am ordained in two traditions. Okay, actually more, I have a bit of a checkered past. But two are the one’s with which I live day in and day out. With Unitarian Universalism comes Reverend and also minister and also senior minister. People unfamiliar or uncomfortable with UU style also have called me pastor and parson and more often than one might think likely, father.

On the Zen side, that Reverend rolls around a bit, more than any other title, I think. It’s what’s on my business card. Or, really, on the card the grammatically more correct “The Reverend.” Another title given me on occasion is Venerable. I’m often called sensei which is another honorific and means teacher. And increasingly I’m referred to as and even called roshi, which I roughly translate as old fart in my head. Which kind of helps. Osho which means priest pops up now and again, as well. That’s what we use for me at our sangha’s website.

To pretty much all when I’m addressed by one or another of these I respond, “Call me James.” What follows is, I’ve decided, none of my business. I try to roll with whatever, from James to Reverend to Roshi.

There’s a reason for this. Titles are not just salve for the ego. They represent things.

Here in the West as we strive to root the Zen way those of us who’ve given some significant part of our lives to the project have come to occupy something of the archetypes of our tradition. Elsewhere, I’ve argued that formal Zen training does not and cannot make a Zen master. What formal training does is create journeymen, people who have been given the tools and some instruction in how to use them and have demonstrated some competencies. So, if I were in charge perhaps the highest title ever formally conferred within a Zen training context would be osho (which translates as elder in much the same way the etymology of priest is also elder) for priests and teacher for both priests and lay teachers.

But, I am not in charge. Which is no doubt a good thing.

So. I began this with a citation from a Zen koan. It’s worth a world of reflection. And. Another gift of our time and place is our magpie use of the world’s traditions to make our point. So, just a little more grist for the mill…

As our teacher Rumi sings to us:

I used to be shy.
You made me sing.

I used to refuse things at table.
Now I shout for more wine.

In somber dignity, I used to sit
on my mat and pray.

Now children run through
and make faces at me.

Of course they make faces in any number of ways. Some stick out their tongues. Others call me roshi.

Or, to use another Zen phrase. Pick your poison…

September 14, 2018
To Save the World: A Few Words for a Friend Who is About to Ordain as a Zen Priest
Next Post