The Gate Appears & a New Religion is Proclaimed 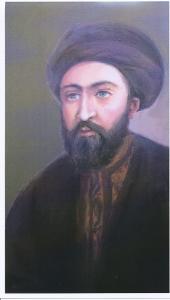 Siyyid Ali Muhammad Shirazi was born on this day, the 20th of October, 1819, in Shiraz in Iran. His family fit into that broad category of “middle class,” his father a successful merchant. Through both his parents he was a descendant of the prophet. In 1842 he married. Their only child died in childhood.

In 1844 he began a public ministry, calling himself “the Bab,” the “Gate.” He claimed to be a forerunner to the Twelfth Iman. Whether he saw himself as a “John the Baptist” figure, prophesying a coming world teacher, or actually saw himself as that twelfth Iman is unclear.

He was arrested in 1845. Not long after he was released. But by 1847, he was arrested again. And he would spend the rest of his life imprisoned within one context or another. During these years people, including his jailers, found his ministry compelling. Some even converted to his cause.

In 1848 the Bab was tried for heresy. While some called for his execution, he was condemned to twenty lashes on the soles of his feet. Some allege he recanted out of this torture. Others deny it. Whatever he was returned to imprisonment.

Eventually he was condemned to death. And according to Wikipedia, “On the morning of July 9, 1850 (28 Sha’ban 1266 AH), (he was) taken to the courtyard of the barracks where (he had been) held…”  It seems “thousands of people gathered to watch his execution. The Báb and (a disciple named) Anís were suspended on a wall and a large firing squad of Christian soldiers prepared to shoot.

“Numerous eye-witness reports, including those of Western diplomats, recount the result. The order was given to fire and the barracks square filled with musket smoke. When it cleared, the Báb was no longer in the courtyard and his companion stood there unharmed; the bullets apparently had not harmed either man, but had cut the rope suspending them from the wall.

“There was a great commotion, many in the crowd believing the Báb had ascended to heaven or simply disappeared. But the soldiers subsequently found the Báb in another part of the barracks, completely unharmed, giving his final instructions to his secretary. He and Anis were tied up for execution a second time, and a second firing squad of Muslim soldiers ranged in front of them. A second order to fire was given. This time the Báb and his companion were killed.”

Not long after among his disciples one Mirza Huseyn Ali Nuri declared himself the one the Bab had prophesied. If, of course, he had prophesied a successor…

Whatever. With that a new religion would birth.

October 19, 2018
Zen Priest & Scholar Victor Sogen Hori Tells us a Little of What the Zen Koan is Not & a Bit More on What it Is
Next Post

October 21, 2018 Zen Master Hakuin on the Four Ways of Knowing
Recent Comments
0 | Leave a Comment
Browse Our Archives
get the latest from
Monkey Mind
Sign up for our newsletter
POPULAR AT PATHEOS Buddhist
1

Buddhist
LEAVING NO ONE BEHIND: Zen & the Work...
Monkey Mind