The Wondrous Annie Besant is Born 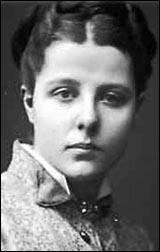 At 20 she married an Anglican priest, Frank Besant. They would have two children together before their marriage collapsed. Apparently spurred on by Annie Besant’s increasing distaste for organized religion and equally increasing devotion to the work of justice.

In 1877, as a leader of the National Secular Society, she and a colleague, Charles Bradlaugh were prosecuted for publishing the American physician Charles Knowlton’s Fruits of Philosophy, or, the Private Companion of Young Married People. She won. But, it cost her the custody of her children, as an advocate for birth control she was deemed unfit to be a mother.

When George Bernard Shaw recruited Annie Besant to the Fabian Society in 1885 he called it a major victory for the cause, as he declared she was “the greatest orator in England.” She was a social activist and journalist. And one of the most famous women in England.

Everything changed when she was engaged to interview and expose the spiritualist Helena Blavatsky who had announced she was channelling ascended masters. Like Colonel Henry Steel Olcott, famous for exposing fraud and waste during the Civil War, and then engaged by a newspaper to expose Madam Blavatsky, only to become a life long disciple – Well, pretty much the same thing happened to Annie Besant.

She became a close associate of Blavatsky for the rest of her teacher’s life, helping to establish the Theosophical Society as a significant spiritual force.

Theosophy is a most unlikely mishmash of spiritualities. What is even more amazing is in its half life how wide its influence has been in matters both spiritual and social. The Theosophical Society was largely responsible for presenting Buddhism to the West and for significantly misrepresenting its teachings. It also was responsible for the small but endlessly fascinating constellation of Christians associated with the Liberal Catholic Churches. Ms Besant would have her hand in both these movements. Probably the heart of her heart was as a theosophical Hindu.

When Madam Blavatsky died, Annie ended up leading the by far largest faction of the now splintered Society.

Annie Besant ended up spending much of the rest of her life in India, where it turned out she’d not lost her taste for politics. She was one of the founders of the Home Rule League and a longtime member of the India National Congress, which she served for a time as president, the first woman to do so. While dismayed when Nehru and Gandhi and other Indians took over the party, really, as had to be; it is worth noting the party of which she was for a time a leader would end up being the leading force in Indian independence and for many years beyond.

She was the adoptive mother of the philosopher and spiritual writer Jiddu Krishnamurti, whom she believed to be and raised to be the next messiah. Even after he rejected the role, they remained close if conflicted for the rest of her life.

She died in 1933 at Adyar, which was the headquarters of the Theosophical Society. Annie Besant was 85.

October 2, 2018 Great Soul: The Smallest of Reflections on Mohandas Gandhi on his One Hundred & Forty-Ninth Birthday
Recent Comments
0 | Leave a Comment
"this geelong seafood blog is great. geelong seafood"
John N LIVING IN THIS FLOATING WORLD: A ..."
"https://www.youtube.com/wat..."
Robert Flannery Narcissus Drowned: The Zen Priest Takes ..."
"long live Theo-poetics! and universalism! and so on and so forth!"
Roger Butts That New Universalism: A Smallest Meditation ..."
"Thank you, James. You explained prayer to me as a way even I could accept. ..."
Ohyetwetrust A Meditation on What My Grandmother ..."
Browse Our Archives
get the latest from
Monkey Mind
Sign up for our newsletter
POPULAR AT PATHEOS Buddhist
1